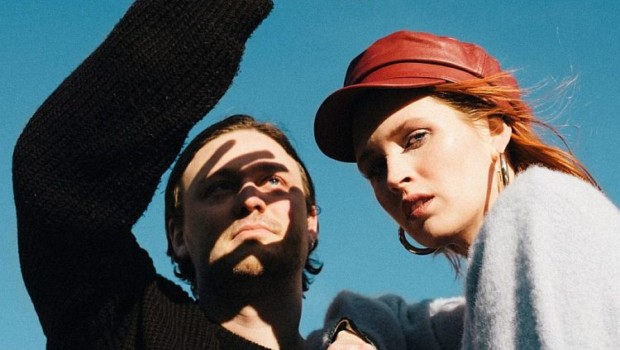 A debut EP highly praised by the music press, two successful singles (“Hopeless” and “Rollin”), airplay on non-Austrian radio stations, sensational appearances at well-known festivals, and a nomination at the UK Music Video Awards in October 2017 as “Best Pop Newcomer” – no wonder that quite a few see the Viennese duo LEA SANTEE as the next big Austrian pop thing.

Listening to the numbers of Lea Santee‘s highly acclaimed debut EP “Venice I” released in 2017, it becomes immediately clear why this Viennese duo is attracting so much interest at the moment. Here, a band is audibly stepping up to the starting block, a band which definitely has what it takes to draw attention to itself on the international stage. Lea Santee are the songwriter and singer Lea Stöger and the producer Manuel Hosp. Although both came from the indie rock corner, they have turned to electro-pop as a duo. The sound they make is one that stands out because of its peculiarity, one that conveys a lot of feeling and works it’s way deep into your soul.

Lea Santee, who now have a publishing deal with Ariel Rechtshaid’s publishing house (Grammy winner and producer of Adele and Haim), approach the matter with caution, they focus on the essentials and avoid any unnecessary excess. Lea Stöger’s expressive voice is framed in catchy lyrics, the warm synthesizers, discreet beats and various electronic players combine in a cool and almost minimalistic way to create very atmospheric musical stories, which – oscillating between melancholic and airily danceable – develop a rather untypical elegance and density for pop music.

From a musical point of view, Lea Santee have everything they need to succeed on the international stage in the future. Lea Stöger and Manuel Hosp display a knack for the musically thrilling. Their sound is one that invites intensive listening and manages to entertain with style. In any case, we can look forward to April, when the second EP of the hopeful Viennese formation “Venice II” will be released.