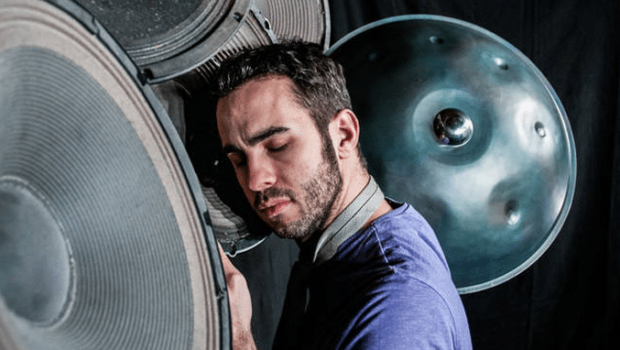 For the ninth time Germany’s biggest club festival, the Reeperbahn Festival, will take place from the 17th – 20th of September 2014 in Hamburg and will attract music fans and industry professionals from all over the world with an extensive program.

In addition to the live performance of the Viennese band Bilderbuch, this year’s Reeperbahn Festival will showcase another highlight from Austria: the hang player Manu Delago on the 19th of September. Just back from touring Europe with the virtuoso sitar player Anoushka Shankar, the 30-year-old Tyrolean is obviously a very busy musician. His performance earlier this year at the renowned Eurosonic Festival 2014 earned him a standing ovation from an overwhelmed audience at the Grand Theatre in the Dutch city of Groningen – possibly breaking a record in terms of showcase festivals.

The musical instrument called the hang looks like a UFO saucer and was developed by the Swiss in 2000. It consists of two glued together steel half-shells (reminiscent of Caribbean steel-drums), which are balanced on the player’s lap and produce enchanting and ethereal sounds that are out of this world when tapped with skilled fingers. It is not for nothing that Manu Delago is referred to as the “Wokstar” (Discodanza) or “Hang virtuoso” (The Times): As a teenager he played in rock bands, then studied classical percussion in Innsbruck and jazz in London, and is now one of the best and most sought after hang players in the world. In the past six years Manu Delago’s video “Hang Drum Solo”, filmed in his basement in Innsbruck, has been viewed almost 5 million times on YouTube.

Manu Delago’s big breakthrough came when he collaborated with the Icelandic pop icon Björk on her album “Biophilia” and toured with her for three years around the world. In the meantime Manu Delago has also been causing an international stir with his various other projects, including his current formation ‘Manu Delago Handmade’ and the collaboration with his longtime peer, the exceptional Tyrolean saxophonist Christoph Pepe Auer. With their project ‘Living Room’, the two will be touring Germany, Austria and Switzerland in October and have already planned a performance with the Luxembourg Philharmonic Orchestra in 2015. Performances with Bugge Wesseltoft and the London Symphony Orchestra are further collaboration highlights.

With a clearer orientation to sophisticated pop music, the musician has created a sonic concept that combines very warm, soulful and dazzling sounds with various stylistic elements. Settled somewhere between subtle electronic tinkering, gentle hang and piano ripples, and melodies that are carried by chamber music outlines and playful jazzy undertones, Manu Delago produces songs that are for the most part very quiet and delicate, but as a whole result in an extremely varied and complex sound.

“Bigger Than Home” is the most recent album of the trio Manu Delago Handmade and reveals its true brilliance and blissful musical moments as the songs quietly unfold. This is mainly due to Delago’s band colleagues, who understand how to implement the visions of the Tyrolean musician in the most impressive and artful manner. Isa Kurz (piano, violin, vocals) and Chris Norz (percussion, drums) will also be performing on stage with Manu Delago in Germany.

Austrian Music Export (AME) invites all its partners and friends to a relaxing Viennese breakfast on the last day of the Reeperbahn Festival. Join AME for Melange (coffee), Sachertorte (cake), and a performance by 5/8erl in Ehr’n. Network with representatives of the Austrian music industry, ring in the final festival day in a casual atmosphere, and make new acquaintances. Open to all Reeperbahn Festival delegates!
Link:

5/8erl in Ehr’n created their very own genre quite some time ago. On their new album YES WE DOES (10/10/2014) they combine Viennese soul with heavy, rocksteady, melancholic waltzes, fabricating a beautifully unsettling reflection of themselves, the world, and the country they call home: Austria.