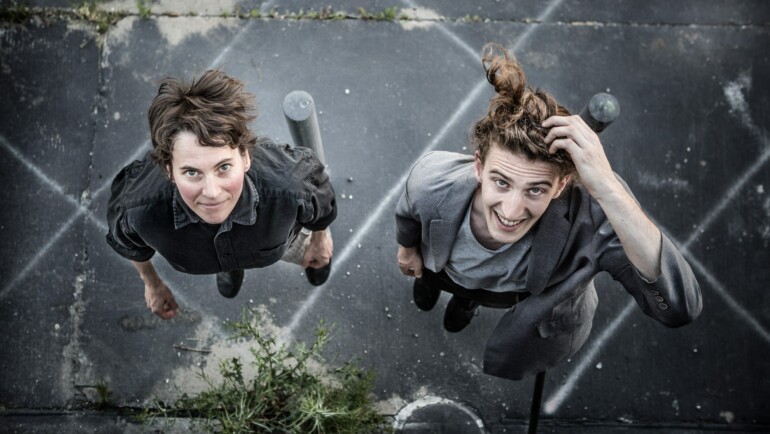 As the bass player in KOMPOST 3 and 5K HD, MANU MAYR moves between jazz and pop. His solo works are dedicated to sound research, and this Viennese man’s versatility is very well illustrated by projects such as SCHTUM and GABBEH. In August, MAYR will be the opening act of the International Jazzfestival Saalfelden together with Susanna Gartmayer to give the time-honored jazz institution a very contemporary twist.

Visitors of the Jazzfestival Saalfelden can expect a very rare instrumental combination, when Manu Mayr will be on stage together with Susanna Gartmayer. The duo is responsible for the kick-off on the main stage of the Jazzfestival Saalfelden on August 23 and lets the double bass meet the bass clarinet. For good reasons. “Like in almost no other combination, a whole new sound is created relatively quickly and simply. It’s about mixing the sounds,” says Mayr in a conversation about the charm of this instrumental entanglement.

Between minimal music and improvisation

Although the performance will follow an underlying structure, it is also about musical moments of surprise. “We will draw an arc from very concrete material, influenced by Minimal Music, to free improvisation,” says Mayr, for whom the performance at the Jazzfestival Saalfelden has something very refreshing, because his routines are broken.

“The nice thing is that I can get involved in something whose outcome I cannot predict.”

Initial spark at the Celeste

Mayr and Gartmayer know each other from the Viennese club Celeste where Gartmayer, together with Didi Kern and Thomas Berghammer, is responsible for the “Monday Improvising Sessions”, which for many years have been considered one of the most important places for improvised music with a contemporary twist in Vienna. A musical venue where dogmas are thrown overboard. Which fits the picture only too well regarding Mayr’s work. For he doesn’t care two figs about the traditional clichés of improvised music, just the same as his career is free of genre constraints.

As the bass player of the 5K HD project, often called a supergroup with a new album to come in autumn, he moves in a pop-culture context. With Kompost 3 he increasingly devotes himself to jazz. Projects such as Schtum and the trio Gabbeh, which is inspired by chamber music, also illustrate Mayr’s role as a messenger of a new generation of musicians. Yet especially his solo works demonstrate that the world has kept on turning.

“I am a child of the zap and cut-up culture, this is reflected in my music”, says Mayr, who appeared in front of the public for the first time as soloist in 2014 as part of the Popfest in Vienna’s Karlskirche. Parts of his solo album (2017) were born right there, because the sacred sound-space was the ideal place in Mayr’s musical self-understanding. “I am primarily looking for new sounds and new expressive potentials. I’m interested in what one can get out of an instrument“. At the same time he is also concerned with remaining apart from practices in improvisational music. Mayr: “The male-dominated gesture of the instrument as a machine gun and the affected display of virtuoso mastery of the instrument aren’t part of my world. What counts in my work is reduction and concentration on sound”. All this has an immediate impact on musical form in Mayr’s work.

The importance of tonal context

“A dramaturgical connection based on familiar or learned patterns is not necessary for me. I like it when there are cuts. This creates the opportunity to relate the sounds to each other. They are easier to stage, implying for me a listening experience of a considerably higher intensity,” says Mayr about the importance of the tonal context, which he ultimately will have to prove also on August 23, together with Gartmayer in Saalfelden.