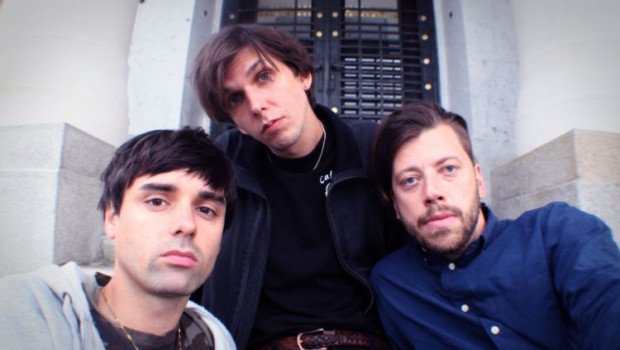 The trio MELT DOWNER is the latest music project from jack-of-all-trades WOLFGANG MÖSTL (KILLED BY 9V BATTERIES, MILE ME DEAF, SEX JAMS).”Alter The Stunt” (Numavi Records/Rock Is Hell) is the second studio album they have released within only 14 months. Deliberately contradicting the zeitgeist with a mix somewhere between noise, psychedelic and all possible sub-genres of rock one.

The conscious Lo-Fi sound of the album is a perfect fit for the general aim of “Alter The Stunt”: not giving a damn about current musical trend toward productions that are as smooth, catchy and highly polished as possible. Instead, they present a very original ideology regarding subcultural, guitar-oriented music. With help of the instruments they aim to be loud and creative in order to generate an energy that truly carries the listener away rather than leaving a song stuck in your head.

Melt Downer delivers a very dense sound for a trio. Sometimes you feel as if you were standing in a garage right next to the band. Mario Zangl’s baselines throb in the best sense of the word and provide the cohesion that the experimental work sometimes needs. Because Wolfgang Möstl just does what he wants anyway and drummer Florian Giessauf is working all kinds of other percussion instruments besides the drums, which has a very refreshing effect on the overall sound. Despite its eclectic style, one of the omnipresent leitmotifs of “Alter The Stunt” is the celebration of the electric guitar: it should be loud, driving and setting the tone. This happens without relying on the usual rock clichés. Instead the ideas are fresh, a little eccentric, and therefore all the more authentic.

Volume against the Zeitgeist

The different tracks borrow from the various areas of rock music: from punk to doom metal and stoner rock. The organ in the background of “Riddles” radiates 70s flair and progressive rock vibes, while a crazy guest saxophone and the rest of the instruments roar into a crescendo that is second to none. “ASMR Crash” presents itself as an up-tempo noise-number, which then runs out of air in an interesting way – making the composition all the more interesting. The beginning of their single “Clown” on the other hand is as catchy as Melt Downer can be, without abandoning their mission to avoid catchiness. As far as the lyrics, Wolfgang Möstl is in the middle of what is probably not his first identity crisis – a crisis that is being musically explored here. Some unexpected twists towards the end “Clown” make it one of the most exciting tracks on the album. Interestingly enough, throughout the whole album the protagonist’s voice is always set in the background, alienated from the effects, and thus sometimes handled more like another instrument.

Melt Downer is the loud playground of three creative minds exploring eruptive ideas. For those who have found most of the rock music in recent years has been too smooth and not insane enough, Melt Downer could turn out to be an absolute pearl of the Austrian music landscape.