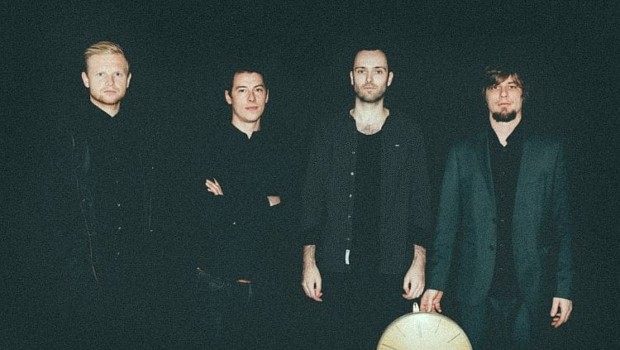 The Tyrolean quartet HI5 combines a wide range of influences under the motto “Minimal Jazz Chamber Music”. From minimal music to pop and rock and even electronics. If you missed their performance at the KICK JAZZ FESTIVAL 2017, you can also experience the band on different stages at home and abroad.

“Merci Merci Marcel” is one of the titles of their fifth album “Fünf” (Sessionwork Records) released in 2016. History-loving jazz fans who first sense a nod to Joe Zawinul and his composition “Mercy, Mercy, Mercy, Mercy”, which quickly became a hit in the recording with Cannonball Adderley, are literally plunged into the deep end. The quartet’s main inspirations do not necessarily come from the main veins of jazz history, but instead tap into a broad and varied network of sources. In this case, this alliteration refers to alpine regions and is addressed as a greeting to that personality celebrated throughout Austria who doesn’t create inspring lines with a musical instrument or a sweeping pen and brush, but daringly cuts them into snow with his skis. Marcel Hirscher, as the HI5 bassist Clemens Rofner reveals with a smile confessing to the band members’ great affinity to winter sports.

Similarly surprising and charming at the same time is the band name HI5, a puzzling name for a four-person lineup. The decisive factor in this context was a concert in the early phase of the group that resulted in an invitation to a festival. Clemens Rofner explains: “We did not yet have a name for the band. And so under time pressure we simply decided to use the title of our 5/4-beat piece as band name”. This was preceded by Rofner’s meeting with drummer Chris Norz and guitarist Philipp Ossanna in Innsbruck. Initially started as a trio, the ensemble – supplemented by the vibraphonist Matthias Legner – was not only able to expand into a quartet, but also to develop its specific band sound in this still existing line-up. Chris Norz and Philipp Ossanna are also composers for HI5. This was followed by various CD releases and performances on Austrian and international stages as well as several prizes and awards, such as the “Grand Prize” at the Bucharest International Jazz Competition in 2013.

A broad spectrum of musical influences and the examination of different styles and concepts underlie their works and combine to a complex amalgam. HI5 features, for example, pop melody lines, inspirations from rock, as well as driving dance beats. With the inclusion of electronic instruments, effects and sound distortions, the band has developed and expanded their sound ideas. The title of the album “Attack Decay Sustain Release” (Sessionwork Records), released in 2014, is a reference to terms commonly used in the use of synthesizers to describe envelopes – an obvious reference to this field of interest.

A flirtation with minimal music approaches – based on the work of Steve Reich, Terry Riley and others – can be found not only in electronic dance music, but also in HI5. It manifests itself musically through the use and superimposition of repetitive sounds and motifs and is immortalized in the credo of the band “Minimal Jazz Chamber Music”. It even constitutes a conceptual cornerstone of the quartet.

Although it has its roots in jazz, the group has increasingly focused on the creation and elaboration of musical processes and structures in the course of its development. The focus is less on the improvisational exploration of free spaces based on spontaneous interaction, but rather on the interlocking playing of the individual instruments, uniting into a harmonious overall sound with the corresponding rhythmic drive.

Even though the structural conception of the pieces sometimes tends toward pop, the buzzword chamber music can also be applied in that each band member – as with a chamber music ensemble – takes on an indispensable role and function precisely tuned in volume and sound together with the other voices to produce the overall musical impression. Clemens Rofner says that what emerges from this are songs that go easily into the ear and can sometimes even reach the tips of your feet. As HI5 describes themselves: “Complex structures meet catchy melodies, minimal music elements meet jazz and rock, references to tradition face the search for new sounds”. A lot is really coming together here. This musical firework is visually accompanied by a flash or two, which the light bulb, which is part of the band’s fixed inventory, throws from the stage into the auditorium for dramatic effect.