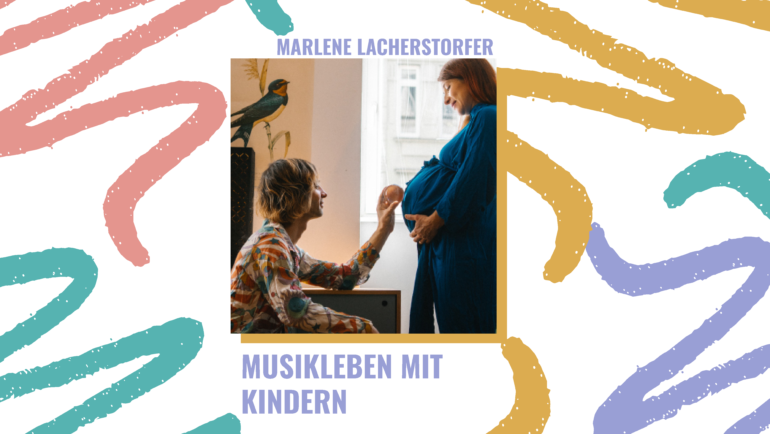 In the series “Music Life with Kids”, mica – music austria and Austrian Music Export explores the question of how professional musicians fare once they have children. In the sixteenth part, MARLENE LACHERSTORFER shares her experiences: What is it like touring with a baby and which means of transportation are best for traveling? What would be helpful, especially in terms of venues, and how could musicians with children be better supported? Lacherstorfer is the bass player for ALMA, Pressyes, Ernst Molden and Clueso, among others. René Mühlberger (Pressyes, Clueso) and she recently became parents of their daughter Mona Sophia, who has already joined them at several concerts.

What has changed for you since you became parents?

Marlene Lacherstorfer: For us it is quite a new state. A lot has changed and, at the same time, not so much. I imagined it to be a lot more strenuous, but Mona is rather chilled out and our life as musicians is already permanently strenuous in a way, in normal times, so we are used to a lot. After almost twenty very active years, suddenly waking up every day next to a broadly grinning baby is a really good change. We laugh more, I sleep more than before, but, as a couple, we have even less time. I’m grateful that Mona lets me maintain part of my musician identity, and at the same time I’m figuring out how much I can put on all of us with a clear conscience. My midwife says children adapt to their parents’ lives – to a certain extent, that’s certainly true.

“There is little talk about parenthood in the music business, it is seen as a private matter.”

In the German-speaking world, it’s unusual to go back to work very soon, but in a European or global context, it’s the great exception. Especially for artist mothers, the compatibility depends strongly on the professional and private environment. In my experience, self-employment is not, in principle, more difficult to reconcile with parenthood than non-self-employment. On the contrary: the freedom to organize one’s work and one’s own responsibilities offers great advantages, which I have recently learned to appreciate anew. But from a financial perspective, it can also be even more difficult for many people.

Are mothers treated differently from fathers in the music scene?

Marlene Lacherstorfer: There is little talk about parenthood in the music business, it is seen as a private matter. It is no longer particularly “rock ‘n’ roll” to be on tour with a child and does not correspond to the traditionally more youthful ideal. Although it affects many people and is also a political-feminist issue, compatibility is not a big topic. But small initiatives like this series of interviews can contribute a lot.

In any case, male musicians with children are perceived differently than female musicians with children. I have the feeling that women are perhaps more aware of this dual role or have a greater need to communicate it. They talk about it publicly more often than men and, since Covid, I’ve noticed that more positively shown in social media. These platforms provide a good megaphone for personal problems and concerns – you can always share private thoughts, network and exchange with people in similar situations and thus also initiate change processes.

“Making fathers visible in the music business in particular would be important for a balanced perception.”

With musician-fathers, I perceive this need to share, less. Perhaps they need to be asked about it more consciously. Representing this role in public is still unconventional. Making fathers visible in the music business in particular would be important for a balanced perception.

On tour with (small) children? In concert in the evening and childcare?

Marlene Lacherstorfer: As a nursing mother, the distribution of roles is forced to be a bit more one-sided, and for me it is quite unusual to suddenly find myself in such a traditionally female role. But this phase passes quickly. (Therefore I have time to fill out this interview, while René is on tour and renovates our garden house, haha 😉. ) Needs of children on tour change quickly, and are supposedly very different later, for each age, and the compatibility becomes increasingly difficult.

We first went on tour when Mona was four weeks old, and so far have had experience primarily with dad, aunt, grandparents and a few acquaintances and friends – strangers to her. On the whole, it has worked well except for one or two outliers. Once I had to leave the stage spontaneously for four songs, but it was agreed with the band that this could happen. I have found that at the moment it is ideal to schedule a short, flexible break in the middle of the set for emergencies. Of course, that interferes strongly with the artistic side of things and doesn’t work for every ensemble.

As far as travel is concerned, so far, train travel has proven best (ICE better than Railjet), and the distances possible in the car can become increasingly longer. Soon I will try longer tours – the suitable flying buggy has already been organized. During summer, we tried all means of transportation while on the Clueso festival tour: Flight, rental car, taxi/shuttle, trains, nightliner. Car worked worst for us, nightliner worked best because it gave us less sleep but more free time. On the upcoming tour we will most likely solve it this way, but all this is only possible with a well sleeping baby.

(A big thanks goes to Clueso, who, with the three of us, entered the experiment tour with babysitter at concerts in front of up to 30,000 people. Because even if it should be like that nowadays – in the rock’n’roll business that is anything but a given!)

Which networks do musicians use?

Marlene Lacherstorfer: So far, we’ve primarily used private networks, on a temporary basis with acquaintances or local people; the first time, the club’s booker even paid attention. In the long run, it will make sense to hire one or two fixed caregivers – we’ll see how long we can get by privately. Andy Baum – nicest rehearsal room landlord imaginable – has made his adjacent studio lounge available for caretaking. So I can rehearse whenever I want, which is essential for me to continue to be active during the baby phase.

“ACCESSIBILITY MAKES A LOT OF SENSE NOT ONLY WITH WHEELCHAIRS, BUT ALSO WITH STROLLERS OR DOUBLE BASSES.”

What would you wish from organizers and where do you urgently need to change something?

Marlene Lacherstorfer: Apart from a backstage room, what’s important for us at the moment is an extra room that’s ideally quiet, at ground level (or accessible by elevator), and can be darkened. Particularly in the subculture sector, where there is already a lack of decent backstage rooms, spatial capacity is often the main problem. In summer, this is solvable in good weather outdoors, but in rain or winter it would not be feasible. For this reason, among others, we moved the last release concert to the Sargfabrik: We were allowed to use the in-house kindergarten there, from where you can get directly to the stage or outdoors, without barriers, using the elevator. Speaking of which – accessibility makes a lot of sense, not only with wheelchairs, but also with baby carriages or double basses.

Is there a need for more sensitivity in the scene in general? What is missing? Are special needs being addressed?

Marlene Lacherstorfer: It is still difficult for me to make a general assessment after our 25 concerts so far. In addition, the requirements for various age groups are extremely different and the working conditions of parents in the music scene are also very diverse. Awareness is there and, in my experience, attempts are made to respond well to special needs. But there is still very little that goes without saying, and some venues or festivals simply lack the capacity or financial means to pay for additional overnight stays for caregivers, for instance. I was surprised, for example, that there is an extra children’s room behind the upper bar at Porgy & Bess. It is used as a storage room, but this was already considered in the space planning a few decades ago.

Awareness of the necessary infrastructure and financial means for extra expenses such as accommodation, travel costs, catering and fees for supervision would, of course, be ideal, but it is difficult to write this into every contract as a band, with a clear conscience. I think a refund option for childcare expenses via grants or submitability to insurance companies would be a good idea for meaningful support!

I recently filled out a survey about parenting in the film business, there were some good ideas in there. It seems to me that the issue of childcare has arrived on film sets rather than in the concert business. I remember suggestions such as tax deductibility for childcare, on-set childcare offered by the film company, or a seal of approval for festivals or event organizers for being particularly family-friendly – just as there are awards for sustainability in the form of green events. This could motivate to offer childcare or corresponding special needs as a matter of course.

Times have changed, social media serves private life as well as the professional environment. How do you deal with this in terms of the dual role as mom or dad and musician?

Marlene Lacherstorfer: How you want to deal with photos of children is something that each person has to think about individually. Do you primarily use social media privately with friends or as an advertising tool with business partners? Do you want to show your children on social media or send them on WhatsApp, which is questionable in terms of data protection or the personal rights of children, or not? If you want to share a special photo now and then I personally don’t find that objectionable, but I’m absolutely in favor of considering things very carefully here.

What aspects of parenthood you share, what private and public balance between being a parent and being a musician feels right, is very individual. I like to share little snippets to show what’s on my mind, to motivate others, or, like right now, here, to start or support a discourse.

I’ve never sought out role models of any gender as a bass player or musician, but as a musician in the dual role of mother, I enjoy reading testimonials and sharing with people in similar situations. It helps me in that case to read personal reports. I am grateful for role models and I like to share my experiences.

Marlene Lacherstorfer: Just – thank you for this important initiative!

For the full series, visit the mica – music austria page. For all those translated into English, go here.