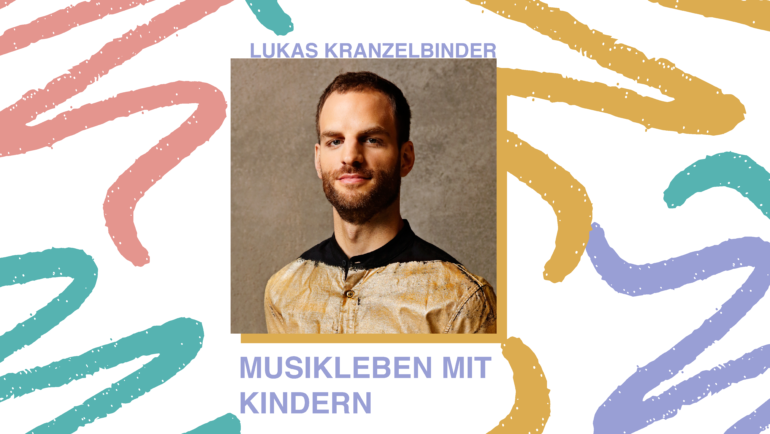 In the series “Music Life with Kids”, mica – music austria and Austrian Music Export explore the question of how professional musicians fare when they have children. In the third part of the series, LUKAS KRANZELBINDER (Shake Stew, Mario Rom’s Interzone) gives us insight into his everyday professional life with children, while examining: Why does one’s own family structure make a huge difference in terms of childcare? Where is there still a lack of awareness within the music scene that musicians also have children? And couldn’t parenthood also be an advantage during hearings for music university positions?

What has changed for you since you became a father?

Lukas Kranzelbinder: I became a father at an early age – 24 – so I know what it’s like to be a professional musician with children and a family. Changed? Everything, especially in terms of priorities. The biggest change for me has been developing an awareness of how much time you have to set aside for certain things to happen at all – that’s especially true in terms of making music. Organizational work and rehearsals can be planned and are also easy to fit into family contexts. However, creative processes very often arise when you have nothing planned and you let yourself drift. Living out phases of inspiration and being able to work longer on compositions is a challenge as a father and musician.

“Living out phases of inspiration and being able to work longer on compositions is a challenge as a father and musician.”

Have you found a way for yourself?

Lukas Kranzelbinder: The principle “All life is chaos” applies always and everywhere. The more you accept that everything is in flux and that nothing can be planned and that, nevertheless, you can cope with it, the better off you will be. With children, it’s massively like that. That’s okay, too. You just have to learn to deal with it and enjoy the beautiful moments, even if they were planned differently. In my opinion, the most important thing for me is my partnership. My wife has been extremely supportive from the beginning. I was the one who doubted that a life as a professional musician with children was still possible. She, on the other hand, always said that we would find a way – and that is true today! My wife Jana is and has been, especially in recent years, an extremely supportive part of my career. I have to say that we also have a very good family structure, as my mother also lives in Vienna and takes care of the children a lot. Colleagues whose parents live further away have a much harder time.

Are mothers treated differently than fathers in the music scene?

Lukas Kranzelbinder: Yes, but not only in the music scene, there is a huge gap that runs through society in general. I generally have the feeling that mothers are treated differently than fathers because the social roles are ascribed differently. There are countless memes on Instagram that denote that: When a musician is on stage who is also a father, people cheer. When the mother is on stage, it’s said that she neglects her children and only thinks about herself. You have to actively create awareness here so that this can change.

In concert in the evening? On tour with (small) children? What networks do musicians fall back on?

Lukas Kranzelbinder: One’s own family structure makes a huge difference – that can’t be emphasized enough. One’s own flexibility and the ability to work and remain creative depend massively on it. Nevertheless, it has to be said that the nature of our profession is, in principle, very difficult to reconcile with the daily routine and the nature of a child. For office work, which I also have to do, the structure of a kindergarten works perfectly. As soon as it comes to times from 5, 6 p.m., it becomes insanely difficult. Most concerts are in the evening when the kids should be asleep. Even things that happen during the day, like soundchecks or traveling, are very tedious. If you don’t have family support, you’re more or less screwed.

I’ve never been on tour with small children myself. But I’ve been thinking about it a lot lately and I wish there was something like the profession of a tour guide for this – a touring nanny who takes care of the kids as part of the tour team. What I think you can already see is that there is a cut-off for many musicians when they have children and retire from touring and performing in their 30s. It’s certainly also the case that some colleagues no longer feel the desire to tour as strongly, which is completely fine… But the vast majority complies because there’s no other way. There is not only a lack of structures, there is also a lack of awareness of the topic of musical life with children. Creating awareness is the first step in thinking about support structures.

“It’s amazing how little the fact that musicians also have children plays a role in our scene. Massive awareness needs to be created here!”

You know, on the one hand, I have the feeling that I have the best job in the world, so that I can also be a good father – also because I am in the fortunate situation that I decide the majority of my concerts myself and can determine how much I am at home. That’s a big advantage. However, I would never organize a three-week tour or something similar for myself, because I don’t want to be away for that long. On the other hand, I find myself in an absurd situation: When you have children, you manage as you think you will. But it’s amazing how little the fact that musicians also have children plays a role in our scene. A massive amount of awareness needs to be created here!

Is there anything you would like to see from organizers?

Lukas Kranzelbinder: I can’t answer that in general terms. Of course, there is the question of who should be responsible for what. Is it a matter of creating local structures for childcare? Or should a new funding line perhaps be created to be able to finance accompanying professionals who take care of the children? I don’t feel in the position to say what is the responsibility of the organizers. It is up to all of us to work together to find ways to improve the situation for musicians with children. I also believe that, in the end, an individual solution is always needed for each person.

Is there a need for more sensitivity in the scene in general? Are special needs attended to?

Lukas Kranzelbinder: In general, definitely! But instead of a lack of sensitivity, I rather point to a lack of awareness. I also believe that this is an issue for society as a whole, because as long as you don’t have children yourself, you simply ignore this issue and have no idea what difficulties can arise here for working parents. It simply has to become a topic, it has to be talked about.

Times have changed. Social media plays a role in both the private and the professional spheres. How do you deal with your dual role as a father and professional musician?

Lukas Kranzelbinder: As far as social media is concerned, I have to say that I use both Facebook and Instagram almost exclusively for professional purposes – i.e. in relation to my person as a musician – and keep my children completely out of it. I think I really have almost never made a post where they appear. That’s very important to me and I think that awareness should be created in social networks through other channels. For example, like here with this interview! Discussions about paternity leave, reports of experiences of musicians as parents or similar topics – I still see far too rarely at the moment.

“I would even say that the ‘mother’ or ‘father’ factor could be quite a big plus in such tenders – because one could potentially convey how these two worlds could be reconciled.”

Another thought on awareness also occurred to me recently: As there have been a lot of hearings for positions at various music universities lately, I’ve been wondering whether children play a positive role in the application process or rather a negative one. So far, I haven’t read anything about parenthood being a positive factor in any way in the announcements (please clarify if this is not the case). If, then rather as a negative aspect, because everywhere the artistic profile and the international reputation are mentioned first. However, the fact that one cannot be so strongly present, especially in the early stages of being a parent, and is thus perhaps perceived less strongly for a certain time, is quite clear and should be supported, rather than ultimately being interpreted as “less presence”. I would even go so far as to say that the factor “mother” or “father” could be quite a big plus in such tenders – also because one could potentially convey how these two worlds could be reconciled. How can you practice your profession as a musician and do justice to your role as a parent? How can you reconcile both? Times have changed, but apparently children are still not a factor that is seen as an asset within the music world.

Lukas Kranzelbinder: I always say, except for the kids, everything is smoke and mirrors. I love music and I live for music. I can only encourage everyone to have children if that’s what they feel they want. In my case, it was relatively early – my daughter is nine today, my son is six – and I’m grateful it worked out the way it did.

For Part 1 of “Music Life with Kids” with Maiken Beer, go here.

For Part 2 of “Music Life with Kids” with Violetta Parisini, go here.