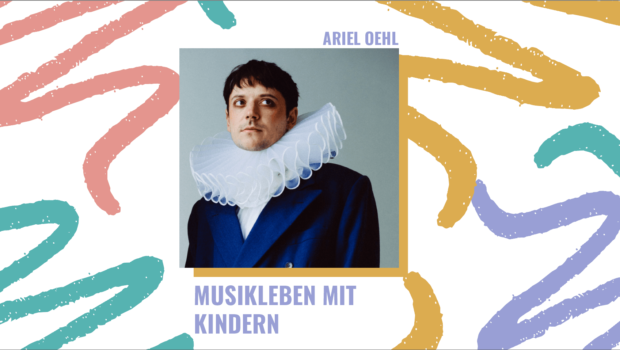 In the series “Music Life with Kids”, mica – music austria and Austrian Music Export explore the question of how professional musicians fare when they have children. In this part of the series, ARIEL OEHL gives us insight into his everyday professional life, with a child: Do fathers today take on more responsibility than in the past, and if so, what does that look like? What role does one’s financial background play in the arts and the music scene? And why does the model of separated parents also have advantages? Read on to find out.

What has changed for you since becoming a father?

Ariel Oehl: Everything. The whole awareness of (male) role models and how my behaviors and positions rub off on a child – that’s when you first become thoughtful and definitely a bit more aware! Children learn through imitation and hold up the proverbial mirror to us. In addition, one no longer lives through self-determination, and that can be annoying. However – and this is probably the best thing about being a parent – the question of meaning in life is relatively easy to answer; or to say that there is always a reason to get up in the morning. Sure, there are dull days when I do accounting or whatever, but cooking a little something in the evening, dinner together. Done, that’s happiness. That’s, quite often, enough.

“BUT I STILL THINK THAT IN MOST PEOPLE’S MINDS, FATHERS OF YOUNGER CHILDREN ARE ‘FREER’ FROM DUTIES THAN MOTHERS…”

Are mothers treated differently than fathers in the music scene?

Ariel Oehl: Maybe. I have my son about three days a week, when I go on tour or when I have to leave Vienna for other appointments, I swap shifts with my son’s mother.

In this respect, I have to time things very well so that everything works out, even doctors’ appointments or seasonal clothes shopping with a child have to be taken care of; and if the kindergarten is closed again because of Corona or one of the countless children’s illnesses arrives, someone also has to stay at home. In this respect, responsibilities probably affect me quite similarly to many mothers, since we divide such things very equally.

But I still think that in most people’s minds, fathers of younger children are “freer” from duties than mothers are assumed to be.

On tour with (small) children? In concert in the evening and childcare? What networks do musicians use?

Ariel Oehl: I think for a lot of families the network is grandpa/grandma/auntie. Most friends are not an option when it comes to childcare or babysitting. In order to get to the point where you can make a living from music, it often takes a lot of patience, and, as in every art, a financial background also plays a role. In my case, for example, that means that purchases such as a bicycle, stroller, car seat, etc. are paid for by grandparents. I also find the model of separated parenthood to be preferable here, because here potential new partners can also help out, thus doubling the field. Also, sometimes it can be quite nice to sleep in or come home at night and not “be quiet”, so an apartment without a child is also a great thing as a father now and then!

What would you like to see from organizers and where do you urgently need to change something?

Ariel Oehl: Pop concerts tend not to be very child-friendly due to travel distances, travel times and volume; I can see that. However, the growth of female or FLINTA acts in the domestic music scene seems enormous to me, and in addition, fathers are also taking on more and more equal parenting duties, so I think we will have to keep asking ourselves this question in the coming years in order not to lose acts from the stages here again. But I don’t have any concrete examples, because the whole concept of touring with children only makes sense to me from elementary school age at the earliest (and my son isn’t there yet).

Is there a general need for more sensitivity in the scene? What is missing? Are special needs (of the children) being addressed?

Ariel Oehl: Here I would distinguish between festivals and solo shows, because the framework conditions are fundamentally different. We have already been to festivals where the artist area was very child-friendly, and with Friska Viljor (Rock im Dorf 2019), for example, a band arrived together with their children, which worked out great. However, we have also played at festivals where there was very little light in the entire artist area and thanks to rain pretty much everything was floating. In such a case, I would have sent children with chaperones to the hotel, because that would simply not have been sustainable at the festival for the whole day. Financing chaperones, additional lodging, etc. is definitely an issue here.

At clubs or concert halls, the premises as well as the accommodations vary greatly, so it is difficult to make sweeping judgments about family suitability. However, what I have experienced in England, for example, is that concerts there typically start quite early and also end on time, which I consider family-friendly. There, it’s also relatively normal to go to the pub or even to a concert after work, but then just directly afterwards and not hours later. Vienna is perhaps particularly hard here, like Gürtellokal concerts often do not start before 9:30pm, and you don’t step into a club before midnight, in principle. Sometimes I wonder how that can be reconciled with parenthood, when children wake up at 6 a.m. and school starts at 8.

Times have changed, social media serves the personal life as well as the professional environment. How do you deal with that in terms of your dual role as mom/dad and musician?

Ariel Oehl: I don’t show any identifiable pictures of my son on social media, but when it’s convenient, you can hear him babbling in a video in the background. I also don’t see why I should create an unrealistic setting to communicate with my audience. It comes as it comes, and then it fits when it fits. At the same time, my listeners don’t subscribe to Oehl as a ‘family channel’, I always try to link the content to music/art.

Ariel Oehl: Kunst (art) and Kinder (children) don’t just happen to start with K. Both are beautiful, but take a lot of work.

For all interviews from the series, visit the mica – music austria page. For the all those translated into English, go here.