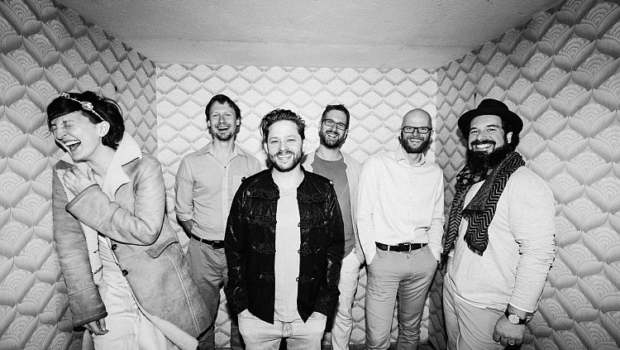 NEUSCHNEE has been in existence now since 2008.  Even though Neuschnee translates as “new snow”, we aren’t talking about a temporary ice age, but instead about a fine band with a lot to say. Their new album “Okay” has been released on Problembär Records, and it is not only cool, but it has a lot to offer.

It starts with a bang. Or rather, with the dark, almost mechanical voice of singer Hans Wagner. On the opener “Der Zeitgeist macht Buh” he philosophizes about today’s society, its many mistakes and contradictions. That might be why he wears a yellow suit in the video. One that looks like a suit worn by worker at a nuclear power plant. But his is hung with bananas. He  also bites into a banana which was peeled and placed in a cling-film wrapped tray. “That’s how we consume in the West,” Wagner seems to think as he rejoices over all the lemons that surround him.

The video contains even more culinary moments. For example, the sausage scene. Wagner asks, “Who’s the maggot, and who owns the bacon?” while dipping a sausage in gold-flake covered mustard. Although the sense of humour is obvious, Neuschnee are serious when they end the song with the line “It’s never too late for a bit more solidarity“. In “Der Zeitgeist macht Buh” the Hamburg school à la Tocotronic meets electropop à la Bilderbuch.

AN ALBUM WITH A SPLIT PERSONALITY

It’s an exciting combination, but it doesn’t go through the whole album. The following songs are a mixture of jazzy atmosphere and classic singer-songwriter ballads. That helps the band slow down their album which clocks in at a rather short 30 minutes. “Stadtstrandkind” is a dreamy and relaxed song which has the potential to become an indie summer hit. It’s nice that the music doesn’t drift into some kind of mainstream painting by numbers summer hit. The song has incredible power and makes some extra points with its great strings.

The nuances are already brilliant, but “Umami” really takes things to another level. Here, Neuschnee once again prove their socio-critical humour by skillfully using food metaphors to mask explicit sexual allusions. “Umami“, sung only in the chorus, sounds like the groaning vocals in Latin American rap tracks. The “Umami” experience becomes especially funny when you watch the video, which is teeming with phallic symbols.

“Okay” ends with two slow, thoughtful songs, with “Lass uns leben” making the perfect final track. Once again, the strings are brought to the fore. Once again self-confirmation finds its place, because even if society is struggling with problems, you can’t lose sight of your own life.

“Okay” is an album with two personalities: On the one hand we have the modern electropop songs and on the other hand there is a lot of classic pop. There is something for fans of both genres, but the electro listeners will get a little less out of the album. Nevertheless, it’s worth paying attention to the slower songs and listening to the lyrics. Because they really are worth listening to.