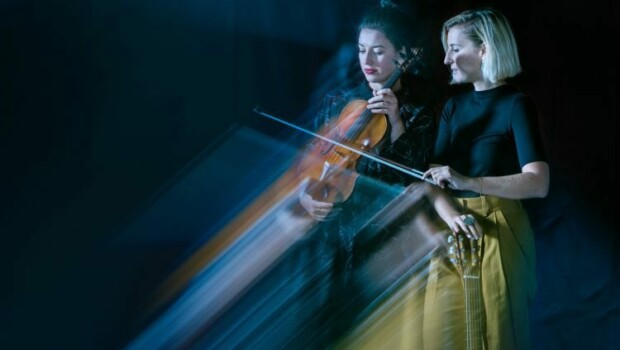 Check out some of the latest albums of the AUSTRIAN WORLD MUSIC scene. Where traditional meets something different and takes it for a spin. World music from Austria: latest releases.

What would it sound like if Johann Sebastian Bach had once had the idea of composing “Heurigenmusik” (traditional Viennese music)? This question and others are explored by the Viennese duo SchrammelBach, Peter Hudler (cello, vocals) and Andreas Teufel (Schrammelharmonika, vocals), on their new release, “Ka Rua” (Preiser Records) (“No Break”).

The traditional Viennese song or traditional Schrammel music comes through in the work of SchrammelBach, as well as elements of classical music, various marches and dances and chamber music. A really nice listening experience where many things combine and intertwine.

A great deal of playing together without notes, always guided by close listening, singing together and replaying what is sung, characterizes the sound of Messi’s Cello Group in an unmistakable way. The roots of the Bregenzerwald string collective go back to the music workshop Glatt&Verkehrt in the context of the festival of the same name.

During the corona period, Evelyn Fink-Mennel, a busy educator, musician, creative mentor and ensemble leader, came up with the idea of asking the band members into the studio and documenting the repertoire they had worked out together over the years on a CD. Connecting threads can be found in many pieces across all genres. The freshly recorded and newly released album “… Almost Live!” allows music enthusiasts to experience the heights to which lively music school lessons can lead.

The two Vienna-based sisters MIRA and SARA GREGORIČ released their first album as Duo Sonoma at the end of last year. Reduced to the sound of violin and guitar, the two musicians, who have been making music together since infancy, move in a wonderful sphere between classical music, folklore and jazz elements. Despite the limited sound possibilities of the chosen instrumentation, “I” (Alessa Records) reveals itself to be extremely varied and dynamic. The constant, tasteful change and the skillful fusion of classical, folk or popular music gives the music a depth that definitely invites repeated listening. Highly recommended for all music enthusiasts!

The Upper Austrian quintet ALPKAN celebrates on its debut album “Hoas is!” (MaKo Records) an original and, at the same time, exciting fusion of folk music, Balkan sounds and popular music styles. The music that the Upper Austrian band creates is one that refreshingly follows its own rules and finds expression in a sound that, above all, inspires great musical variety. Their new release, “Hoas is!” has become an album where the musical stories are told in a truly original way.

A sound that emerges from different musical languages and tells its very own stories – this is exactly what you get to hear on “Great Again”, the album by the duo Marie-Theres Härtel and Florian Trübsbach. The duo musically presents pieces which act as wonderfully lively and stylistically diverse forms of crossover music. They combine tradition with modernity, the alpine with the urban and pave their way to jazz, brushing against popular music styles and also bringing chamber music into their sound. A new release and a beautiful listen.