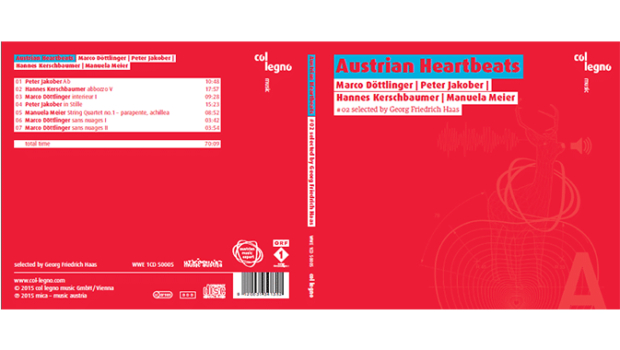 The new CD “Austrian Heartbeats #2 – selected by Georg Friedrich Haas”, which is dedicated to contemporary music from Austria, has just been released.

The Austrian composer Georg Friedrich Haas, whose oeuvre was most recently featured in the renowned Wien Modern Festival 2014, has emerged as one of the world’s most important living composers. For this compilation, he has selected works by four young up-and-coming Austrian composers Marco Döttlinger, Peter Jakober, Hannes Kerschbaumer, and Manuela Meier. The recordings on this album were produced by the Austrian broadcaster ORF, and include performances by members of Klangforum Wien, the stadler quartet, the Phace Ensemble, the Trio Amos, as well as the A Cappella Choir Tulln.

As the title suggests, Austrian Heartbeats #2 is the second in a series of three albums dedicated to showcasing new music from Austria. The first CD, which was curated by Vienna-based producer & DJ, Patrick Pulsinger, and featured a selection of electronic music tracks, premiered in 2014. The underlying concept of the series allows for established Austrian composers and/or musicians to create a selection highlighting music by young up-and-coming artists working in diverse genres.

ABOUT THE CURATOR, GEORG FRIEDRICH HAAS

The 61 year-old Graz-born composer and curator of this new edition of the Austrian Heartbeats CD series, Georg Friedrich Haas, is the recipient of numerous awards, including the Grand Austrian State Prize, the International Composition Prize of Salzburg, the Ernst Krenek Prize, the City of Vienna Prize for Music, the Andrzej Dobrowolski Composition Award, and many more. The artist, whose micro-tonal layers have gained him legions of followers throughout the world, is an active and avid supporter of young composers in search of their own musical language. In September 2013, Georg Friedrich Haas joined Columbia University’s composition faculty in New York where he currently serves as the MacDowell Professor of Music.

ABOUT THE AUSTRIAN HEARTBEATS SERIES

The hidden strength of Austria’s musical landscape lies in its niches. The country’s musicians don’t always produce easily accessible fare, and the “Austrian Heartbeats” series stands for a certain kind of idiosyncratic stubbornness. Austria boasts a number of excellent music events and international festivals, good record stores, and a wonderful openness toward cross-pollination between different music scenes and genres. The musicians and their respective environments such as record labels, bookers, promoters, managers, etc. all live for music and the “Austrian Heartbeats” series celebrates the dedication and love with which Austria’s music-makers approach their art.

The music of the four composers selected by Georg Friedrich Haas for this compilation defies categorization, and as such provides a wonderful illustration of the genre-crossing diversity that this series was designed to highlight. Two compositions by Marco Döttlinger, who, incidentally, was the 1,000th composer to be inducted into the music austria Database, are on this compilation: “sans nuages“ and “interieur I.” On one hand, Döttlinger creates new sound concoctions by combining electronic and acoustic instruments, and on the other hand, he camouflages the individual tonal identities of an accordion, a viola, and the voice of a countertenor, as is the case in “sans nuages.” Peter Jakober contrasts mechanical precision with the constant asynchrony of the performers. The paths between musical extremes that Hannes Kerschbaumer takes are manifold, and in doing so he manages to fabricate memories of what has supposedly been heard before. And the sound reservoirs that composer Manuela Meier creates are continuously subjected to manipulation and alteration.

ABOUT THE COL LEGNO LABEL

The Vienna-based col legno label impressively demonstrates how productive the dialogue between genres ranging from classical music, jazz, world music, to pop, rock and electronic music in all its varieties can be. Its catalogue features classics from the 19th Century as well as contemporary music of all kinds. col legno is also a frequent collaborator of some of the world’s most prestigious festivals, such as the Salzburg Festival, the Wien Modern Festival, the Darmstadt International Summer Courses for New Music, and the Donaueschingen Music Festival, to name a few.