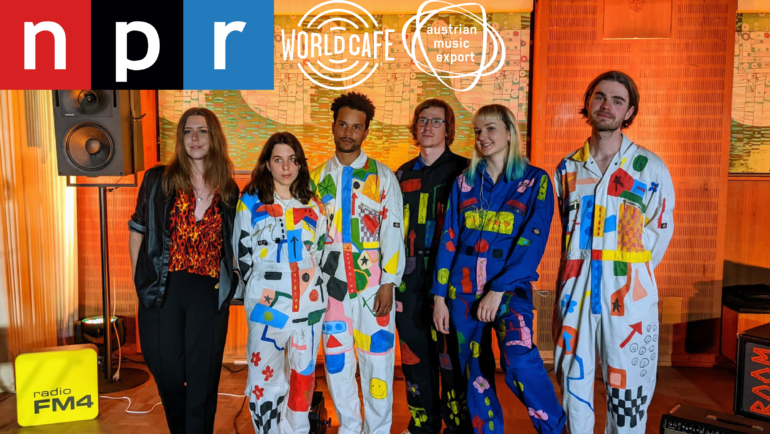 Some of the finest players from the Viennese music scene, both present and past, to be aired on 275 National Public Radio (NPR) local stations across the USA… W-w-wait, what?! Do dreams really come true? Sometimes, yep …

This spring, the U.S. National Public Radio’s (NPR) premiere popular music show “World Cafe” host Raina Douris and production team (WXPN) travelled to Vienna to collect local music and stories for their special series: “Sense of Place”, to be aired across 275 local U.S. NPR partner stations between August 17th – September 2nd, 2022. The segments include interviews with the Vegetable Orchestra, YUGO, the director of the Vienna Museum of Science and Technology, and a walk through the graves of iconic composers and musicians at Vienna’s Central Cemetery, plus live music studio sessions and interviews with the bands: Sharktank, Dives, My Ugly Clementine and Bilderbuch! Austrian Music Export was honored to take on the task of co-curating and co-organizing the program together with NPR’s World Cafe, while joining forces with Radio FM4, to make the bang even greater. This is a must-hear event! So, scroll down for the full lineup, broadcast schedule, tips for streaming and helpful links …

How to tune in

If you’re in the U.S., you can simply turn your radio dial to your local NPR station to catch the segments, live. World Cafe can be heard on over 275 radio stations across the United States. The complete carriage list is available at here. Fans can check their local station’s Program Schedule for the World Cafe broadcast time. On WXPN, World Cafe’s home station, the show airs at 2pm ET (20:00 CET).

If you’re anywhere else, then go to XPN.org and find the “listen live” audio player at the top of the page.

Missed it, live? No problem: the segment will be archived for on-demand streaming at WorldCafe.NPR.org and on the Sense of Place page by 5pm ET (23:00 CET) on the day of broadcast, and remaining online thereafter.

Moreover, for videos from a selection of the segments, go to the World Cafe Youtube page.

World Cafe was launched on October 14, 1991 at WXPN in Philadelphia. Distributed by NPR, it reaches millions of people a year through its daily broadcast on 275 stations, digital content on NPR Music, and podcasts of interviews and exclusive performances by musicians. The two-hour daily program features a mix of artist interviews with in-studio performances by both established and emerging artists. They have had a number of big-name guests visit the program more than once (musicians like Billie Eilish, Neil Young, Adele, Lizzo, Elton John, Coldplay, etc) but also pride themselves on music discovery. The music selection encompasses singer-songwriters, classic rock, indie rock, Americana, alt-country, blues, world music, R&B and soul. As the nation’s most listened-to public radio music program, its impact on the careers and audience awareness of thousands of artists is immeasurable.

The World Cafe is broadcast on WXPN Monday through Friday at 2pm ET.

World Cafe is produced by WXPN in Philadelphia. It is hosted by Raina Douris, along with contributing host Stephen Kallao.