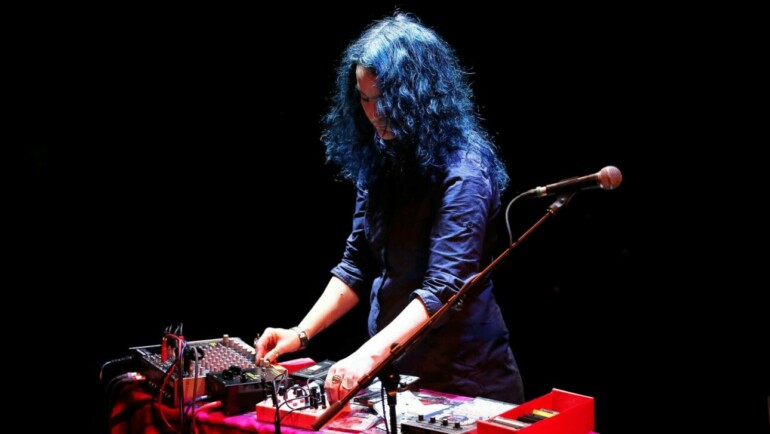 The improv quintet of ANGÉLICA CASTELLÓ, KAI FAGASCHINSKI, BARBARA ROMEN, GUNTER SCHNEIDER and BURKHARD STANGL aka ZIMT has released the new album “Ganz” (“Completely”) on the label BESO DE ANGEL – recorded between two lockdowns and live at KLANGSPUREN SCHWAZ in September 2020. Within three quarters of an hour, “Ganz” lets you doze off while “the ears observe”. Christoph Benkeser and Michael Franz Woels have talked to ANGÉLICA CASTELLÓ about how this works, her “Ikea recorder” and the ability to concentrate in everyday life.

“Ganz” is the new album by Zimt – a homogeneous flow of discreet sound interventions lasting three quarters of an hour. I wonderfully drifted off into a liminal state while listening to it, and then fell asleep. This was a deep listening experience for me…

Angélica Castelló: That’s exactly how it should be! Maybe you know this Zen legend, I think it goes like this: A master teaches his student music. He says to him: Practice for one year and people will laugh when they listen to your music. Practice ten more years and they will cry. But practice until your listeners fall asleep. Then you will be a great master.

How can you get into a mood where that is possible?

Angélica Castelló: You have to make the time for it. We humans listen too little, don’t take the time for long durations, and lose our attention to the constant skipping in computers. That’s why the piece guides us to be there and in the moment. Drifting off in the process is optimal. The music flows. It’s a long journey – even if I don’t like the word at all in this context. Originally, I wanted to release only cassettes on my label “Beso de Angel”. But this recording works better on CD.

Why was the recording divided into five individual tracks when the album is called “Ganz” (meaning “completely”)?

Angélica Castelló: I am not at all happy about the division into individual tracks, because it is due to a pragmatic decision. We thought about the audience. The idea was to be able to jump between the titles within the 45 minutes. It would have been more radical to leave the piece as a unit, as it is online on Bandcamp. After all, it’s like a painting. This project doesn’t follow linearity but is meant to evoke the feeling of standing in the middle of something and looking around. I think of a meadow at night. Above you, you see the stars, you’re just observing. “Ganz“ is about this approach: observing with your ear.

In paintings, no part can be detached without violating the totality.

Angélica Castelló: I’ve been listening to a few radio shows on Mixcloud lately. If you miss a track, you can’t – at least as a free user – just jump back and look up what the track was called. As a result, you have to be there; you can’t just let it play on the side. We’re hardly used to that anymore. After all, everything is available at all times – we’re streaming and doing something else at the same time, knowing we can watch or listen to it again later. To me, that’s the wrong approach. I would prefer to make a cassette or CD that self-destructs after being listened to for one time.

Are we as a society unlearning how to practice patience and appreciate the uniqueness of events?

Angélica Castelló: I’m noticing it myself. My concentration span is getting shorter and shorter – almost like a child’s. That has to do with external influences, social media, etc., of course. But I find it exciting to observe. The question is: Where does this acceleration lead? To absolute emptiness? To a point zero? Is that where we find true insight?

“THIS IS THE MAGIC OF THE MOMENTARY NATURE OF A LIVE RECORDING.”

Or nothingness. However, a lot happens on “Ganz”. Sounds are circling, flowing in and out – and ending at some point, you can pleasantly lose yourself in it. That’s a beautiful realization.

Angélica Castelló: It’s about a kind of timelessness in which you can lose yourself. That’s very much related to the group. Barbara Romen, Gunter Schneider, Kai Fagaschinski and Burkhard Stangl follow the idiom of the now even more than I do. They move musically in a contemplative world. In contrast, I am much more nervous. Perhaps this is due to my approach to electronics. This approach manages to break through the contemplation, even to disturb it consciously in some moments. And yet, on “Ganz” emerges a world in balance again. This is the magic of the momentary nature of a live recording.

One that reflects the external circumstances at play?

Angélica Castelló: Exactly, the improvisation documents the moment. It may sound esoteric, but: in improvisation, the true impulses of the soul come through. The unconscious, perhaps an apprehension or a melancholy – feelings that are residing in something. At the same time, our music is not so much carried by emotions, it is rather a ” discussion “. This play with atmospheres reflects our states of mind about matters relating to the outside world. They resonate in the sound.

In Ensemble Zimt, you not only play the recorder, but also with cassette tapes.

Angélica Castelló: With Zimt, I try to play instrumentally, i.e. recorder, more often. With the Paetzold recorder, I can respond very directly. But there is a lot of electronics on “Ganz” – the cassette sounds run through the live set like a central theme. I like to work with the medium of tape, using sine tones or natural sounds from field recordings, but I also use old radio plays or recordings from scientific interviews.

Angélica Castelló: I think he sends the signals to our second guitarist. They are very different, but still always find each other. This is also related to the fact that they have been friends for over forty years – they know each other insanely well, they are the heart of this project.

“…BECAUSE COMING FROM AN ELECTROACOUSTIC BACKGROUND, I TEND TO THINK ANECDOTALLY.”

You can hear this basic trust in their playing.

Angélica Castelló: Apart from that, they are great masters when it comes to improvisation. If one says A, the other knows exactly how B should sound. I’m approaching this with a different background, because coming from an electroacoustic background, I tend to think in an anecdotal way. I call myself the romantic of the ensemble for a reason.

It is precisely this contrast that characterizes Zimt.

Angélica Castelló: And the fact that we don’t take ourselves too seriously. Kai Fagaschinski leaves nothing to chance, but he is also a very funny person. He is a big fan of heavy metal. He also has a duo with pianist Chris Abraham, they call themselves The Dogmatics. The record covers have this skull heavy metal aesthetic.

Cue conceptual art and aesthetics. John Cage is often mentioned or quoted by impro ensembles. Why do you quote Marcel Duchamp?

Angélica Castelló: The concept piece “Erratum Musical” by Marcel Duchamp was at the very beginning of Zimt. Before we started improvising, we performed this idea by Marcel Duchamp at a Fluxus exhibition at the Museumsquartier in Vienna. Compared to today’s project Zimt, however, it was a tight corset. After all, a concept also constricts. Nevertheless, for me, this world of readymades is the best thing that could have happened to the 20th century artistically. It had a lightness, it was a liberation, and, in my opinion, it allowed non-academic artists to find a place in the art world.

To subsequently academicize this place again.

Angélica Castelló: Yes, an entity emerged again that was and still is highly academicized. You only have to look at the canon of composers who are taught at music academies today. Kai Fagaschinski also once said – tongue in cheek – “that you shouldn’t study music at a university.”

A freedom that was preceded by certain privileges.

Angélica Castelló: That’s true, better social and economic circumstances obviously help you to be able to develop your creativity more freely. But if your personality is insanely obsessed with your art, you don’t need that. There are always artists who come from nowhere and from the most difficult circumstances. The French-Canadian composer Claude Vivier spontaneously comes to mind.

And the canon of music history at music universities was, of course, very strongly male-dominated for a long time. But obviously there are also female role models in contemporary music.

Angélica Castelló: I’m teaching only female role models for a semester in the repertoire of electroacoustics. And I’ve been asked by colleagues, “Can you do it?”- in the sense of, “Are there enough examples?” Of course, I manage it easily. And I then also ask the young students to show me examples from the clubbing scene. Because for me, that’s also electroacoustic music. And I’m really amazed at what’s happening in this generation, if you consider the creation in general to be diverse – also in terms of gender attributions.

Let’s talk about your instrument, the sculptural, square Paetzold recorder, which also looks a bit like a readymade by Marcel Duchamp.

Angélica Castelló: Yes, the design is somewhere between Ikea and Bauhaus. A funny anecdote about the Paetzold recorder: I wanted to demonstrate the instrument to a composer who wanted to get to know it and compose for it. I set up a large recorder, two meters high, and he looked mute, not reacting and waiting. Then, when I started to play, he laughed, thinking that this wooden box was just the case of the recorder.

But there are also large recorders that are round. Pia Palme, for example, only plays round bass recorders. These Küng recorders have a different, nobler sound – more like real recorders. The Paetzold recorder can sound like a didgeridoo or like a wooden box, and I like this noisiness of the keys. The Italian composer Augustino Di Scipio described it as a “noise machine.” There are also pieces composed especially for the Paetzold recorder, you can only play them on this recorder. A highlight for many is the piece “Seascape” by Fausto Romitelli. It was composed for the flutist Antonio Politano. He developed the contemporary language of the Paetzold recorder a lot. I played this piece many times in my student days and afterwards, and it has greatly influenced the palette of my improvisational playing. Antonio Politano has explored the technical possibilities of articulations, playing with the keys, singing with the recorder.

“… EVEN COMPLETELY ABSTRACT MUSIC ALWAYS HAS A NARRATIVE.”

Playing with tapes and improvising on the Pätzold recorder, aren’t those two very different musical approaches?

Angélica Castelló: They are indeed two different worlds that I combine into one. I usually record the recorder with two microphones, sometimes with a few effects. Poetically, the two musical elements go well together, because “Blockflöte” is called recorder in English. That comes from Old English, actually from Italian. “Ricordare” means to remember. A tape recorder as a recording device is, after all, a memory device. Recorders in England were instruments that reminded people of bird calls. Both have to do with memory. I consider my instruments metaphorically and philosophically as one.

Today I read something beautiful on the subject of narrative structures. Recorded music, even quite abstract music, always has a narrative, simply by the lapse of having already been. And even the moment you hear a sound, that sound is already passé again.