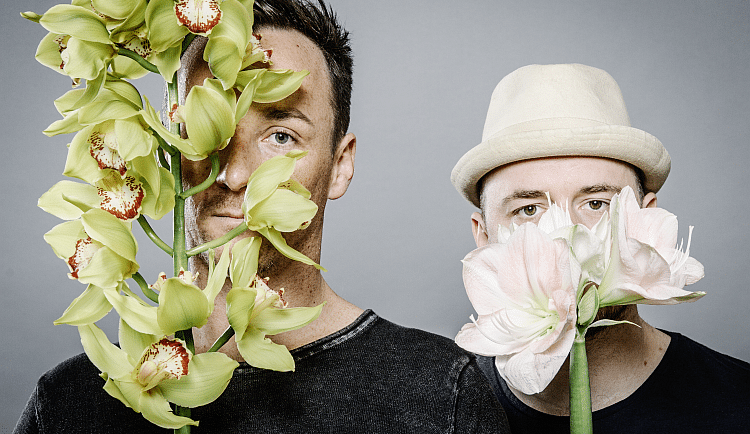 In 2010, Gregor Ladenhauf and Daniel Kohlmeigner released the track “Miezekatze”. A song that created a new musical paradigm and catapulted the duo to international fame. And now, 11 years after their founding in 2005, the electronic duo have finally released their long awaited debut album. “Constant Spring” will be released on Affine Records, and on the 22nd of April it will be presented at the Cafe Leopold in the Museums Quarter in Vienna. Gregor and Daniel spoke with Julia Philomena about the delay (that really wasn’t), their process, and the bird as shooter.

How would you describe your album “Constant Spring”

Daniel Kohlmeigner: The colourful cover by Leonhard Lass, practically our house or court artist, comes across, together with the title, as being very euphoric and energetic. Behind that energy is a spirit of optimism that we wanted to get across musically as well as visually, with the help of artwork and videos. Aside form that, it is certainly not a pure club album. The tracks aren’t all just good for the club, some are also good for home.

Gregor Ladenhauf: The mix of pop elements and other genres, like jazz for example, has always been a part of our tracks. In that sense it was never our goal to make straightforward club music, and I think we achieved that quite well on “Constant Spring”

Daniel Kohlmeigner: I think the phrase “neither fish nor fowl” hits the nail on the head. We were also more blatant with the use of Gregor’s vocals and used them very pointedly. The voice is less singing and used more as an instrument. At least a part of the sound.

Gregor Ladenhauf: When we started using vocals it was still unusual and a rarity. There weren’t many other acts that were doing that because it was either seen as a no-go or they preferred to use samples. Who wanted to stand on stage in a club and sing?

Daniel Kohlmeigner: That is why Michael Reinboth, back during the first recordings, asked us what we wanted to do with the sample. The fact that it wasn’t a sample, but recorded vocals, had everyone baffled.

Gregor Ladenhauf: In the beginning it helped us stand out in the crowd a bit. But now the vocal thing has become so omnipresent and made it to the mainstream, that it isn’t really relevant for us as a trademark anymore. We didn’t really have to rethink our approach to vocals though, because we only ever used them if they occurred to me and worked well with the music.

How was Ogris Debris formed?

Daniel Kohlmeigner: in 2005 we were at a creative workshop in Hallein, at the Perner Island in Salzburg. in the Schmiede. I was interested and went with a friend, and I also knew some of the organisers and participants. Gregor was already pretty good at many things because he had studied at the FH in Salzburg. And so we came together indirectly. Not long after Gregor moved to Vienna and then we started working together.

Daniel Kohlmeigner: At that time Gregor and I wanted to start a band that was more dance oriented. We gave it a shot and luckily enjoyed it so much that we continued. Our first gig was in Massiv.
Gregor Ladenhauf: For the first two years we only played live. Until we thought, maybe it’s time to record something.

Ogris Debris has released around 10 recordings so far. Why did you wait until now to release a debut album?

Georg Ladenhauf: Live shows were always our focus, the wish for an album always came from someone else.

Daniel Kohlmeigner: We never collected material. When our first recorded track was going to be published on Compost Records, they asked us for a B-Side and we said “wait a little, we will make one”

Gregor Ladenhauf: After the first releases Austrian labels started to show interest in us, and we always had to explain that we needed time because we didn’t have a stockpile of songs. we didn’t want to be pressured, but to decide for ourselves when tracks were finished. Making an album. And it paid off.

Daniel Kohlmeigner: For us in the club context, it isn’t really a requirement, classic albums aren’t usual or essential. When someone asked us when our first album was coming out we just always answered “The album will come out. Soon enough”

How is “Constant Spring” different from your previous recordings

Gregor Ladenhauf: Except for “Miezekatze” but that is a different version. That’s why we added “My” to it in order to differentiate between the old and the new.

Daniel Kohlmeigner: Since we are best known foe that track it was important for us to give it a “Constant Spring” treatment, so it would fit with the rest of the album. For “My Miezekatze” we used a lot of instruments that also show up on other tracks on the album in order to give it a basic sound form that works well with the other recordings.

The visual design of your current music video, “See The World” came from the Viennese graphics and animation studio LWZ. Why did you decide to use a video game aesthetic?

Daniel Kohlmeigner: The scrolling effect is, naturally, a reference to the people who are constantly in front of a computer screen scrolling manically through the internet. We gave concrete instruction for the content, but not for how it should be made. The combination of video game and Facebook optic appealed to us.

Gregor Ladenhauf: The scrolling aesthetic helped the animators create a leitmotif between the various scenes. The bird. The bird took on the role of a shooter in a video game. If it weren’t for the bird the video game aspect wouldn’t be as well developed.

What is important in a club, and what makes a live performance special?

Daniel Kohlmeigner: We don’t play a monotone four hour gig, we play compact and intensive, usually a little more than an hour. In that form it is less of a DJ situation and more of a performance or concert. We want to challenge the listener and bring them along with us and entertain them. When we play the audience has already been dancing for hours, and they will continue to dance for hours afterwards and that is why we try to play with a lot of variety and power.

Gregor Ladenhof: The most important is that spark, the interactive. We are all partying together at the same level. If there is one thing I want to give, it’s energy. The more energetic the performance the better the audience reacts.