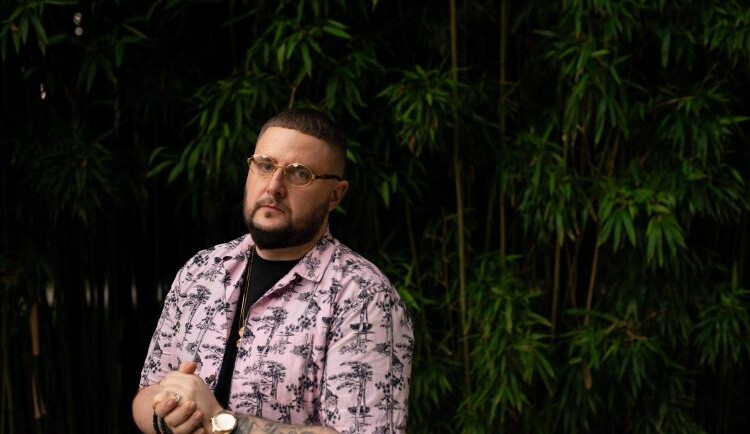 BRENK SINATRA delivers smooth beats all over the world. For his latest album, which has the greatest dose of a summer feeling to date, he and his team have started a label. As part of the series on Austrian producers, Stefan Niederwieser spoke with BRENK.

Have you ever been on the verge of giving it all up?

Brenk Sinatra: Mr. L, a rapper from Frankfurt, was my first release. Beats were already circulating in Vienna in 2003. Everyone I grew up with went the normal route with kids and being in debt for a condo. I stuck with it, even though everyone said I was crazy. As a school dropout, I only had shitty jobs back then. It was really hard. Nobody did me any favors. I moved out when I was 17. With my back against the wall I put all my eggs in one basket. Being able to make a living from just music was my biggest dream. I also wanted to show people that we needn’t hide from German producers, that we are even more innovative in Vienna. I paid a lot of dues for my first publishing deal, which at that time was the only option to make what I’m doing today possible.

Brenk Sinatra: For a Viennese to make an instrumental album, wasn’t the most normal thing to do in 2008. It was rather smirked at. But it started to catch on in Germany. Then “Gumbo 1” was among the best 20 instrumental albums of all time in Juice. That of course was a great honour and a huge joy. And the starting signal for everything. People had me on the radar. About the end of 2012, making a living became possible just by creating music.

How much is a beat from you?

Brenk Sinatra: That’s like asking how much does a car cost? It’s really from here to there. It depends on so many factors. Selling beats is also not the main source of income for most producers I know. Most of the time you agree on points and no buyout. Especially with people who perform well in streaming, percentages are ten times better than being fobbed off with a buyout. Know your worth, as the Yanks say. You have to make your point, but keep a  realistic stance.

How long have you been running your business yourself?

Brenk Sinatra: I’ve had a strong team around me for two years. Now there are four of us handling these huge things. Before that, my wife and I did everything ourselves.

How difficult is it to collaborate across the pond?

Brenk Sinatra: The dream of working with American rappers is there for every producer, of course. They are the best. They invented it all and are setting the trends. But unfortunately things still get lost, management doesn’t know anything about anything and you hear one half of your beat later without getting any credits. A lot of rappers are screwed up. ASCAP doesn’t account for the stuff properly. The publishers are fucking around. Distance plays a role as well. It’s really difficult. They are simply wired differently than we are. At least the people I’ve dealt with so far. You need a strong partner over there. Otherwise it’s just a pain in the ass. That’s what a lot of people say, unfortunately.

Brenk Sinatra: We have structures in Germany. Most people stick to the rules within this musical landscape. Of course it’s a shark tank. You have to bare your teeth. Some producers are introverted and cannon fodder for manager sharks. But until today there was, and is, no other option. Most people make it only via Germany. Nine and a half times out of ten. Falco already said that.

How did working with Xatar come about?

Brenk Sinatra: Some of my instrumental albums have flushed out into circles I never thought they would. And then someone writes to you, hey, I’ve done a song on it, let’s get it out there. That’s how some things came about. It was the same with Xatar. I met him when he was still in prison in Cologne and had a night out. I heard the wildest stories.

And the last album by Kreiml & Samurai?

Brenk Sinatra: That was a rather spontaneous story. We had met each other. Their concerts are just complete “mayhem”. I didn’t have them on my radar. We got the album off the ground in two or three months. It was number 4 in Austria. Then corona came along. They had played live a lot before that. The tour would have given the record the next boost. In Vienna they were scheduled at the Gasometer venue.

Who wouldn’t you work with?

Brenk Sinatra: When you do rap stuff with Americans or even Germans, there are many who have done time for various violent crimes. I grew up with people like that. You know, I know people who have gone off the rails. If two people had a fight a few years ago and one of them broke the other’s nose, that’s just stupid. But if that was a reason … well, then I couldn’t work with half of them anymore. But I would immediately pull the emergency brake on really ugly things, if children were involved, racist things or anti-Semitism. No debate.

Which projects are still in the vault?

Brenk Sinatra: I have a few demos on my hard drives. No whole EPs or projects. Apparently there’s a verse by Kendrick on one of my beats. Kendrick’s album “Good Kid M.a.a.d. City” had MC Eiht on it. And there was supposedly a counter-deal. I was on the road a lot with MC Eiht at the time. And Kendrick was supposed to have rapped on one of my beats that we were supposed to have used. But I never heard it. Whether that exists, I don’t know. According to MC Eiht, it exists. You hear it like that, you think, oh my God, Kendrick, effing A! But one becomes jaded. I’ll believe that when I see it for real.

How do you work?

Brenk Sinatra: Before, only on the computer. I used Acid software from the beginning. I can use it in my sleep. I quickly switched from Fruity Loops to a Wavelab and Acid combination, and later Native Instruments. I’m endorsed by them. In the meantime I have a big studio with many instruments. I’m collecting a lot of vintage. I love the way it sounds, the feel, pressing buttons, sliders, faders. The tinkering suits me. Even if the large choice you have almost inhibits you at times.

Brenk Sinatra: A sampler was like a uniform. You had to have one if you did hip-hop, an SP 1200, MPC or Akai. I never had the money for it. That’s why I had to use cracked software on a rundown computer.

Do you clear all rights?

Brenk Sinatra: I’m using samples now that I made myself, samples from colleagues or samples that have been cleared. It’s just getting hotter and hotter. Who sampled is great for consumers. For the producers it’s a nightmare. Your stuff is on display. Allegedly, the idea for the platform was born by major labels, simply to see who was violating their rights. And then someone implemented it. I shudder when I hear that my name is on there. You can’t delete the old records. There weren’t any big streams, it was all hobby stuff, there’s not much there.

Is that why “Gumbo” is not available for streaming?

Brenk Sinatra: “Gumbo 1” is coming soon. Our new label is doing a re-upload. Then there’s almost my whole discography. Individual tracks are actually not up because the sample is too hot, I agree with you.

What are your plans with Wave Planet Records?

Brenk Sinatra: As a label, you can only create the best possible starting conditions, i.e. that the mix, master or cover are really “top notch”. What happens afterwards is random and will remain random. You can’t control that as a label. Our distribution partners are Groove Attack and Believe. We have also set up a publishing company. Wave Planet is primarily meant for up-and-coming talents. Stylistically we aren’t limited at all and have already done a good job. Of course the label is a home for my stuff. But creating it just for myself would be a kind of North Korean move.

Brenk Sinatra: I’m actually singing. On some tracks it was a mix of vocoder, talkbox and autotune which I transformed into layers. It’s not mixed in such a way that it stands out fully like a voice, but rather as part of the beat. At some point I had a few tracks and thought they sounded awesome in a row. I’ll play over the sketches, record ten tracks, delete half, cut that up, and so on. I often use a Rhodes piano. It immediately gives you this warmth. The lead sounds of synthesizers in the late 70s are deeply rooted in West Coast culture. I’m using those a lot, sometimes upfront, sometimes in the back. The album is the logical continuation of “Midnite Ride”. There the drums and the programming were completely different for the first time. The tempo was slower. And this record has a very summer-like feeling. I wanted to create an uplifter. It has this aesthetic of No Limit, Suave House, Rap-A-Lot, Cash Money and the late 90s. I tried to bring that into the here & now. We’ve all been through two really shitty years. I wanted to make a record that I like to listen to when it’s warm. This is definitely the record.