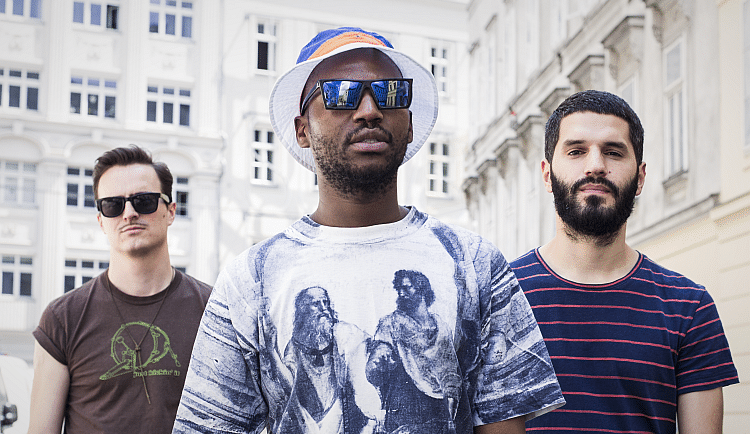 Okmalumkoolkat is back! In the summer of 2014, together with Cid Rim and The Clonious, he released the debut of their collaboration “Holy Oxygen Part I” (Affine Records). Now, not quite three years later, they released the sequel. Same title, different content. The EP “Holy Oxygen II” lives up to the high musical expectations.

Simiso Zwane alias Okmalumkoolkat has been a part of the Affine Records family for a while now. And with his recent release he has once again delivered a well produced and multifaceted record. The subtitle could be “Austrian-South African Friendship”. Because the artistic results constantly move between the two. The musicians skilfully weave together a diverse selection of influences and sound aesthetics over the course of the four tracks on “Holy Oxygen II”.

The collaboration between the two Viennese producers and Okmalumkoolkat began on the South African tour of Cid Rim and The Clonius during a trip to Johannesburg. From that time on Okmalumkoolkat was part of the game. The result of this encounter was the EP “Holy Oxygen I” and a smooth functioning musicians-collective.

Okmalumkoolkat international breakthrough took place in 2012. He performed together with the British producer LV on the album “Sebenza” which was released on the “Hyberdub” label from Kode9. The feedback back then was thoroughly positive. And now it continues.

A MUSICAL SYMBIOSIS OF DIFFERENT AESTHETICS

With the opening track “Straight To The Top”, Okmalumkoolkat reflects musically and vocally on the past couple of years; his career, it’s development, and all that comes with it. The significant sound that had been established on the previous release one again reveals itself. A futuristic version of GQOM inspired sounds and lyrics that goes straight to your eardrums.

The following track “Zweitbester” is primarily a self-reflective dialog amongst the trio itself. A musical symbiosis between the aesthetics of the musicians and their mutual convergence. Stylistically elements of smooth jazz and a certain feel-good house mood come together with the characteristic vocals of the rapper. “Isimangaliso” is more revealing and plays with dynamics, particularly in the vocals.

And at the end comes “Shark Attack”. Worlds collide, but the result isn’t destruction so much as fusion. Juxtaposition and interconnection are the primary features of this cooperation, not separation of the elements. The artistic result is in no way monotonous or predictable. As the last sounds of the album fade away what remains is a musical plurality and the urge to hit “repeat”.

With “Holy Oxygen II”, Okmalumkoolkat has once again interwoven Zulu, diverse sounds and dialects and an accessible flow into a whole that is incredibly memorable. It’s exactly this fusion of languages, content, and approaches that makes the EP so varied. It also a work that is the result of a collective thinking above and beyond the boundaries of country or genre.

Ada Karlbauer (translated from the German by Dave Dempsey)