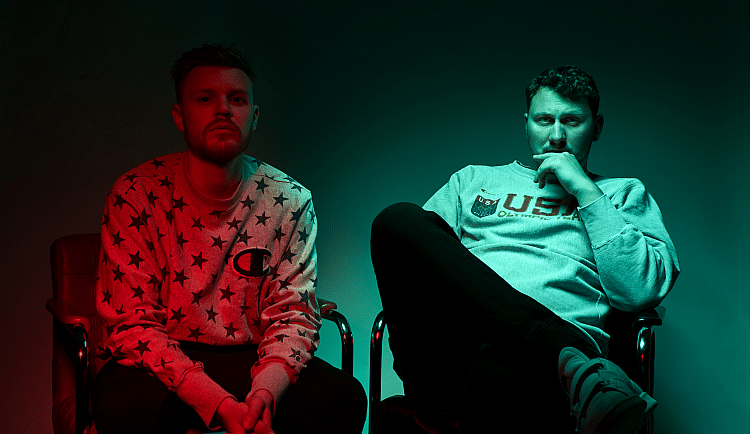 “Chron” (Karmarama/Sony) is the remarkably mature second album from OLYMPIQUE. Since the debut album already caused quite a stir, the duo from Salzburg left nothing to chance on their follow-up album. “Chron” is a detail-rich interpretation of alternative rock music from musicians who placed high-demands on themselves. But the memorable voice of Fabian Woschnagg makes the music easily accessible to a broad audience.

The guitar riffs on “R.O.F.”, which opens OLYMPIQUE’s second release, are almost boisterous compared to the rest of the album. The song also displays the band’s versatility. What really stands out, however, is the conspicuous thread that ties the entire album together and makes it feel like a unified whole. The fact that all of the songs sit comfortably in a toe-tapping, mid tempo range certainly contributes to this. The music of OLYMPIQUE is an opulent mixture of almost reverent indie-rock, electronic elements, and rhythms that often step to the fore. The arrangements of individual song parts and ideas are skillfully done and despite an unusual mixture of styles their songs have a real pop-appeal. That might also have to do with the very catchy and charismatic voice of Fabian Woschnagg. It can confidently be called the true unique selling point of OLYMPIQUE.

ONE VOICE TO RULE THEM ALL

The sound of the vocals are sometimes melodic and sometimes rough in just the right places. But they are performed by a voice that is always emotive. The clever arrangement of the vocals does the rest. “Call and Response” schemes and gang shouts just highlight this all the more. The highlights on “Chron” are probably the single “True Love”, an ear-worm by design, or the beautiful “Warlord”, which slowly builds, layer by layer.

Olympique really dig deep into their box of tricks on the closing track, “Will it be alright”. Haunting drum sounds alternate with wind instruments, a beautiful piano sets the tone, and distorted vocals show a certain willingness to experiment. On “Chron”, OLYMPIQUE move confidently with the zeitgeist of modern rock without being ingratiating. They consistently follow their own recipe by presenting emotional and catchy vocals enthroned over somehow similarly powerful compositions and arrangements. It is a mixture that should make OLYPMIQUE interesting for both radio and the home turntable.