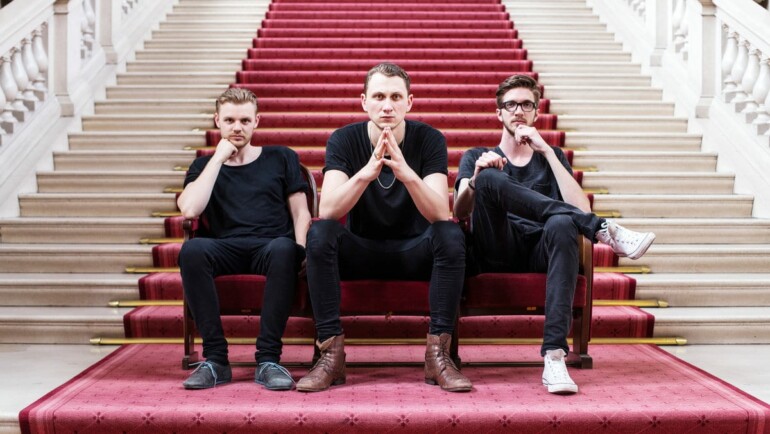 Regarded as one of the most anticipated local indie-rock albums of the year,  the expectations for Olympique‘s new debut album were high. The two singles “The Reason I Came” and “No Estate to Remind” released beforehand were stellar and helped to create the excitement about the new album. The final release of the full album “Crystal Palace” (Acoda/Sony Music) did not disappoint and can easily be added to the best of this country’s indie-rock releases in recent years.

The sense of enthusiasm that you feel during the initial listening of Olympique’s debut album is not something you experience every day. “Crystal Palace” is a spine-tingling thrill ride through thirteen captivating tracks with mesmerizing vocals and supercharged melodies. Fabian Woschnagg, Leo Scheichenost and Nino Ebner, the three heads behind this Salzburg formation, truly understand how to draw on grand gestures of indie-rock, without falling into the trap of clichéd pathos. Their music is refreshingly authentic and genuine, which is due to the fact that the band refuses to submit to any mainstream sounds.

Fabian Woschnagg and his band colleagues share their own distinctive musical visions and transmit these into impressive, powerful and above all wonderfully timeless songs. The trio from Salzburg skillfully oscillates between indie-rock anthems (“The Reason I Came”, “Words Lose Their Lines”), fragile ballads enriched with blues (“Face Down The Earth”) and catchy pop songs with depth (“Lullaby”). The vocal performance of the charismatic frontman Fabian Woschnagg is particularly outstanding, with his rough but soulful voice that soars through the varied pieces and turns each song into an enchanting and spell-binding listening experience.

With “Crystal Palace” Olympique have definitely set their mark as serious contenders in the music scene. It does not take a prophet to predict that this band has what it takes to succeed on a large scale.