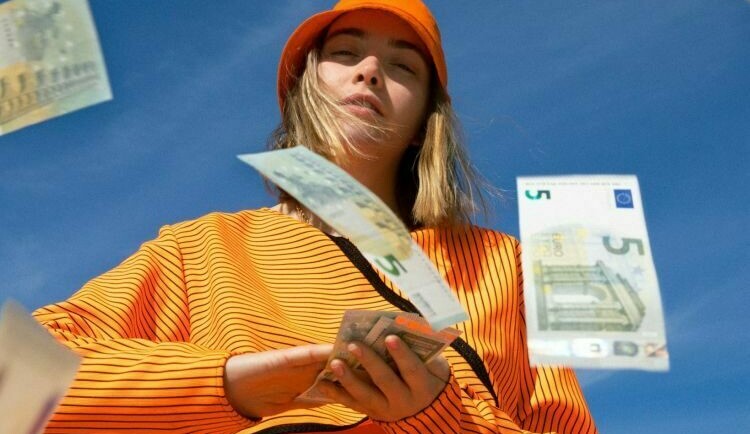 FLORENCE ARMAN feels at home in the world of timeless pop finesse, but before stepping into the spotlight herself, she was busy writing tracks behind the scenes. In the production of her debut EP “Out of the blue”, FLORENCE not only made her romantic decisions but also her creative ones with her heart. Clemens Engert spoke with the young Brit, who lives in Austria, about the decision to release her music under her real name, what a perfect pop song is, and the differences between the London and Vienna scenes.

The video for “Out of the blue” is very successful. Can you tell us something about the idea behind it?

Florence Arman: The idea for the video actually came about when I saw a jogger on Mariahilfer Street and briefly thought she was smoking. Of course, that was a crazy image at first, but it was more this discrepancy that stuck with me – between what you aspire to or where you want to go, and where you actually still are. That’s exactly what happened to me with a friendship that broke up. I wanted so much to get my life back on track, but I couldn’t quite get away from the whole story.

Is there anything like a common thread running through all the songs on your debut EP?

Florence Arman: The songs have a common thread in that they have taken me through the last few years and simply capture a certain time in my life. Thematically, however, they also vary as a result.

To what extent is music for you also something like a means to be able to cope with negative things?

Florence Arman: For me, songwriting has almost the same function as writing a diary. I just find it incredibly liberating. Writing a song is a bit like arguing or having a good cry – except no one can argue with you. I love that. Once feelings are in a song, they’re legitimate. If you share them with your girlfriend, for example, you might get the objection, that you’re wrong.

You have worked a lot as a songwriter for other artists in the past and released your own music under the pseudonym klei. What made you decide to release your songs under your real name now?

Florence Arman: It was a pretty natural process. I’ve always just written songs for myself, but just taken ages to release. Eventually, though, there came a time when there were these seven songs that felt like a cohesive whole. My manager and I then thought “let’s go”. I had already released a lot of songs with the klei project before, but these were created in sessions and were therefore not quite as personal and intimate as my own music. That’s why it made sense to publish under my real name from that point on.

Florence Arman: It’s actually different every time, but most of the time it’s already decided before a session who you’re writing the song for. But it has happened – for example with my song “All Night” – that something was created in a joint session with other songwriters and it suddenly became very personal when it came to writing the lyrics. Then you can’t let go of the song.

What was your most exciting encounter in all the years you have worked with other artists? Were there also sobering experiences?

Florence Arman: Well, the first encounter with the Kooks was very crazy. They say “never meet your heroes”, but in this case it wasn’t true – because in the meantime we are all good friends. I still think it’s crazy though, because I’m such a fan girl. So far, no encounter has actually been disappointing. It’s just totally exciting to work with so many other artists and musicians. Often you have quite a lot in common – people who find their way to music probably have similar characters – and so you form very close friendships very quickly, because you also often completely open up in a very short time, in order to write a song.

What do you think is the most important characteristic that makes a good pop song?

Florence Arman: I’ve been thinking about that for a very long time, and I’ve since given up on it. As soon as you think you have it figured out, along come ten totally brilliant songs that disprove exactly what you thought. Anyway, I think authenticity is very important.

FUNNILY ENOUGH, I DON’T REALLY CONSUME MUCH MUSIC MYSELF – IT JUST GETS ON MY NERVES

Who do you consider the greatest songwriter in history?

Florence Arman: (Sigh) I probably know too few for that. Funnily enough, I don’t really consume much music myself – it just gets on my nerves. But, who always comes to mind in the context of great songs is Billy Joel. I love him. Extremely.

Are you constantly in a creative flow or do you suffer from writer’s block sometimes?

Florence Arman: Yes, unfortunately I also have phases of writer’s block. But they happen more when I’m trying to write a song for myself. When you write with someone else, you inspire each other and automatically get feedback right away in the exchange. That always works, actually.

You commute back and forth between Vienna and London. How do you perceive the music scenes in both cities? What are the biggest differences?

Florence Arman: I think the biggest difference is that there are fewer collaborations in Austria. I think that the exchange between each other is super important and creates a positive climate in the music scene. Also, it’s really exciting to see what interesting projects are formed in this way. What I also notice is that in Austria, musicians who don’t make smooth radio-pop or indie have a bit of a harder time because there are too few platforms for them. Who knows what incredible music is still out there in Austria, but you don’t hear about it because the necessary media infrastructure doesn’t yet exist.