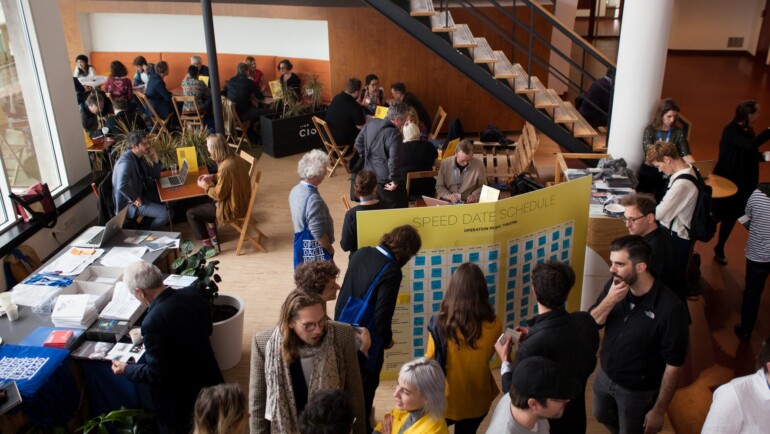 In the field of pop, rock and electronic music, it’s quite usual for upcoming artists to play at showcase festivals, like Eurosonic Noorderslag in Groningen in the Netherlands, which is one of the biggest Showcase festivals in Europe. However, as common with many other aspects of contemporary music, the mechanisms work differently. Consequently, Austrian Music Export continues to work on developing formats and structures that suit a satisfactory inclusion of contemporary music.

To kick off the Austrian Focus, our delegates were invited to the Austrian Residence in The Hague. A concert programme presented by members of the ensemble Airborne extended was accompanied by an artist talk. Through the hospitality of the ambassador, Austrian composers and expats were given the opportunity to establish significant contacts in the Netherlands.

Óscar Escudero and Belenish Moreno-Gil showcased their seven-minute performance “[OST] Original Soundtrack” as part of the “Flat Time Trilogy”. Both describe the Austrian Focus at the Operadagen Rotterdam as “a valuable experience. It was a great opportunity to meet creative, committed people and get to know about other circuits in the music theater scene, which are not always connected. Many of the participants expressed surprise at the stylistic diversity.
Elisabeth Schimana, composer of “Gestochen und Weg”: “My expectation was to gain an overview of what is subsumed under the terms music theatre or opera. I must say that I was very astonished. Some of them I wouldn’t have considered.

Regarding our experience, we are pleased to note that our performance of “[OST] Original Soundtrack” at Kriterion was a topic of enriching conversations during lunch breaks. We were happy to discuss the current heartbeat of musical performance or the inclusion of portable technologies on stage.” – Óscar Escudero & Belenish Moreno-Gil

Leonhard Garms, conductor and member of the Austrian Schallfeld Ensemble: “I will take it as an impulse to increase active networking and as an incentive to think outside the box as much as possible, which is often difficult when you are very busy with your own things.”

Franziska Guggenbichler Beck, who presented “Be My Superstar” by composer Simon Vosecek and Alexandra Lacroix described the Professionals´ Programme as “an amusing experience that also made me think a lot. […] An abundance of pitches that clearly shows that the scene is vibrating all over Europe.”

On September 14 we will meet again for an international networking event dedicated to the fields of opera, music theatre and contemporary music. Stay tuned for the upcoming Austrian Music Theatre Day 2019.