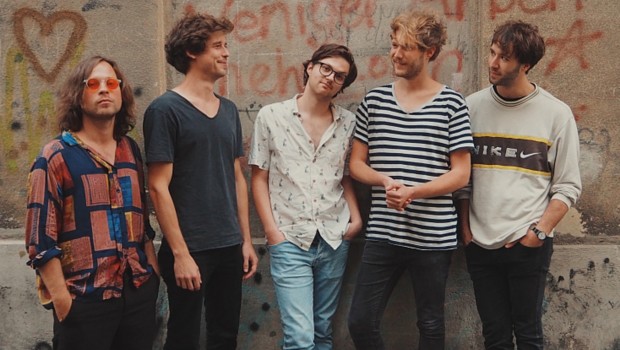 The Austrian music-collective POLKOV published their second album “Closer” on the 25th of November. Although the quintet has enjoyed significant attention since their formation in 2012, “Closer” will be their last album for a while. It is time for a break.

Paul Pfleger, Laurenz Jandl, Alex Hackl, Günther Paulitsch, Jürgen Schmidt and Florentina Finder have been making music together since 2012. This year Florentina Finder quit the band, and now they are just five. But even as a quintet, Polkov works. The new album is delicate, and plagued by disappointment and self-doubt. They exchange pedal steel guitar for 80’s synths and combined that with their celebrated song-writing skills. What used to be a europe-wide showcase series has become a critically acclaimed music project. One that is taking a break after this album. Because it is good to quit while you are ahead.

First off: “Closer” is an excellent work. It has something for everyone. Wether rock, or pop, or singer-songwriter – it’s all there. Every single song is a surprise, a gift that reveals itself with a push of the play button. The bows around the presents are the lyrics written by Laurenz Jandl and Jakob Kolb. Vocals that continue to reveal new harmonies with repeated listening. The instrumental backing of the vocals is reminiscent of early Tocotronic, whereby Polkov have left out the raw undertones and sound more vulnerable.

The album begins with the track “My Sweet Oblivion”. A song filled with nostalgic memories that manages to be cumbersome and fleet-footed at the same time. The refrain can raise goose-bumps and put one in a dreamy trance. But this mood is immediately changed by the following number. Tempo and mood shifts, but the dreamy feeling remains. But that is Polkov’s specialty. The title song “Closer” was recorded together with Florentina Finder. It is a duet that puts the listener in the rare state of happy melancholy. A massive sound carpet is rolled out and in the middle of it the voices are finely woven, perfectly composed and combined.

“Stay” is a somewhat more rocky song that isn’t fast but laid back. The atmosphere moves somewhere between road-trip and forever goodbye, while remaining continually optimistic. The album closes with “Hyrule”. It begins as a purely acoustic track that slowly transforms into a ballad. Once again, it is hard to tell if the song is happy or sad, since the harmonies change from verse to verse to refrain. The tempo is throttled, the lyrics excite the heart of enthusiasts, and the instrumental foundation is, as on the rest of the album, the best of the best.

It is a shame that Polkov are taking a break. Because it would be easy to get used to albums like this. The songs on “Closer” are soothing and can sweeten winter days, especially in the frequently stressful holiday season.