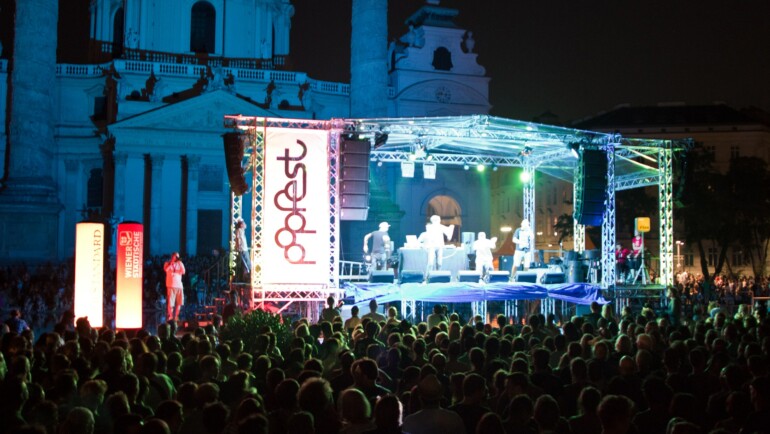 Today heralds the long awaited festival start of the Popfest Wien! After a series of hot, sweat dripping summer days in the city, the weather forecast for today predicts a storm. Indeed, a storm is coming, and this in the form of a musical blast for the next few days. Rain or no rain, this will definitely not keep the hordes of live music fans from gathering at the Karlsplatz Vienna in the center of the city to support their local heros.

What started in 2010 as a first cautious approach to anchor pop music in the heart of Vienna, may now, regarding the great interest of music fans (last year with over 50,000 visitors), be considered as a real success story. Taking place this year from the 25th – 28th of July, the Popfest Wien has been able to establish itself as a benchmark in the Austrian music scene. More so, it stands as a testament to the diversity and vibrancy of the local pop scene, which is now calling more and more international attention to itself. In this light, this year’s stylistic range in the program, curated for the first time by Patrick Pulsinger, is as varied, vibrant and abundant as it gets. Following the theme of recent years to offer the audience as few repetitions as possible, this year’s festival opens the stage for a number of promising newcomers to introduce themselves to a large audience. Once again, a major part of the festival are the Popfest Sessions, which serve as a platform for discussions and conversations on current topics in the music industry and are organized in cooperation with departure and mica – music austria.

In the past years curator Robert Rotifer set the quality bar quite high for his successor Patrick Pulsinger. Thus, big expectations were laid upon the new program director. Will he be able to increase the already very high standard of past festival editions? And what new features will he put forward? Well, the first question can definitely be answered with a yes. Just as his forerunner Robert Rotifer, who is not completely gone and still continues to support the organizing team with advice, Patrick Pulsinger focuses on a broad stylistic spectrum, ranging from indie pop and electronics, singer/songwriting and modern Viennese songs to prog rock, hip hop and all sorts of weird and interesting musical outputs. 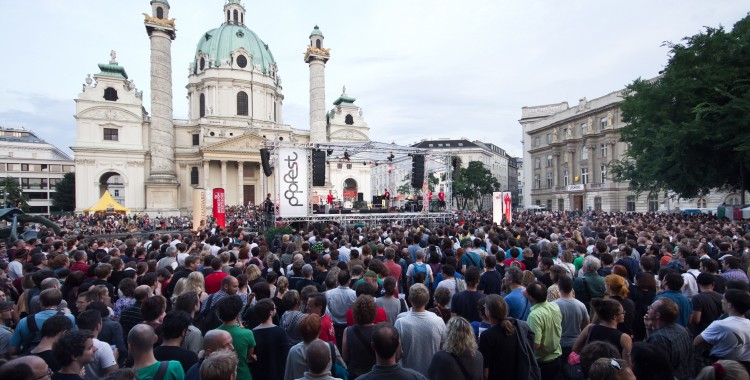 In the selection of acts, the Viennese curator proved himself as a true connoisseur of the scene, or at least very well informed, and has definitely put a lot of thought into choosing the most interesting acts of the local music scene. Thus, three heavyweights of the local pop scene, Steaming Satellites, Bauchklang and Her Voice Over Boys, will kick off the opening day on the big lake stage in front of the Karlskirche. Sticking to the stylistically colorful mix of the program, the following days on the main stage will feature a line-up consisting of the Maja Osojnik Band, Giantree, Catastrophe & Cure and the A.G.Trio on the 26th of July, as well as Soia, Velojet, Gin Ga and Atomique on the 27th of July.

Exciting local music will also be offered offside the main stage. Among many others, the audience can look forward to concerts with Ghost Capsules, Koenig Leopold, Gudrun von Laxenburg, Sex Jams, Milk+, Spring and the Land, Sado Maso Guitar Club, Brenk Sinatra, Gerard and DAWA. New this year, and this answers the second question from above, is that the Karlskirche will also serve as a venue for the first time. Finishing on a “quiet” note on the 28th of July, the festival will end with Ritornell feat. Mimu and O, the new project of former Bunny Lake’s front woman Teresa Rotschopf.

Anchored firmly in the festival since the very beginning are the Popfest Sessions, which will take place between the 27th and 28th of July and will form the supporting program at the Kunsthalle Karlsplatz. Besides numerous other topics, the Popfest Sessions will cover Austrian pop music history, as well as the issues of “crowd funding” and “Vienna as a starting point or destination of artistic careers”.
Michael Ternai
(translated from German)
Photos Popfest: © Simon Brugner/They Shoot Music

For the entire festival program go to:
http://popfest.at/#Programm