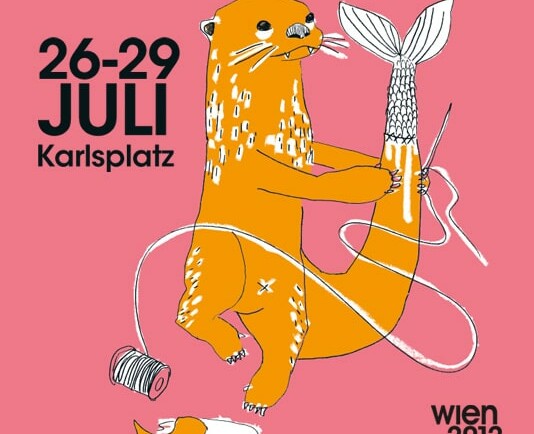 After the outstanding festival debut in 2010 and the no less spectacular sequel in the past year, the organizers of the Popfest Wien are determined to once again succeed with this year’s festival edition, which will take place from the 26th to the 29th of July. With a program that is more extensive than ever, the new timing of the festival in July and a few other small changes, such as extending the number of venues with the renowned Ost Klub, the organizers should be able to settle the high expectations of fans and critics that have naturally been built up after the last two successful editions. The last remaining secrets of the Popfest Vienna were revealed at a press conference in the Vienna Museum, namely the names of the performing artists and bands.

With the aim to set the local pop music in the spotlight, the Popfest Wien can look back on  two very successful Popfest editions with tens of thousands of music fans gathering each year at the Karlsplatz and in the adjacent locations. Now it is time to lift the project to the next level and to reap what has been sown. Robert Rotifer, the curator of the festival, definitely did not take his duty lightly in the selection of the many bands. In total there will be 47 concerts this year.

This year’s festival is almost like a summary of the past two years. On the one hand, the festival will present some of the currently hottest acts of the Viennese music scene, and on the other hand, the festival also wants to give lesser-known bands the opportunity to perform in front of a bigger audience. Thus, we can look forward to the likes of Elektro Guzzi,  Attwenger, Kreisky, Texta, Patrick Pulsinger and Wolfram, who will all play for the first time at this festival, as well as Welle Wien, The Beth Edges, Mile Me Deaf, Anbuley, Eloui and Monsterheart, who are perhaps lesser known to big crowds. Visitors can also expect to see a regular guest, the Viennese singer Ernst Molden, who has been a part of the Popfest every single year now. Also no strangers to the Popfest are Nino aus Wien, M185 and Anna Kohlweiß aka Squalloscope.

In terms of the program, the musical variety once again plays a major role and the stylistic diversity has been expanded more than ever. The program ranges from tasteful singer-songwriter sounds of artists such as Bernhard Eder, Mel, Martin Klein and Werner Kitzmüller to excursions into the diverse world music, practiced by Fatima Spar & The Freedom Fries, Alp Bora and the Nifty`s. It is also a great opportunity to get jazzy with Willi Landl, oblique and experimental with Sixtus Preis and the jazz-electro-improv band Kompost 3, pop and queer with POP: SCH, modern Viennesque with 5/8erl in Ehr’n, and francophone with Mopedrock.

An important part of the festival is also the music conference called the Popfest Sessions.  Together with the Austrian Music Fund, mica – music austria is responsible for a two-day conference, which will focus on the conditions of the current pop music scene and the economic aspects of new (local) pop music. Aesthetic dimensions, economic potentials and risks of a rapidly changing industry will be addressed in panel discussions and interviews.

11:00 WORTSCHWALL 1: WHO CARES? AUSTRIAN POP DEDUCTION, PRESENTED BY THE GAP
A few people toil against forgetting, make compilations and music boxes, collect important musical works in archives, or present an Amadeus Award. Recently films were made, with or about pop from Austria. And our fatherland sometimes bestows its sons and daughters with a federal cross of merit.  Well, mainly sons, namely STS. But is that it? Where is the canon, where are the festivities, the palaces, the memorials, the Youtube documentaries? And if that doesn’t work, what kind of system can be found behind it?
Guests: Samir Köck (Die Presse), Gerhard Stöger (Falter), further guests tbc
Moderation: Stefan Niederwieser

13:00 WORTSCHWALL 2: INTERVIEW WITH ANNA KOHLWEIS / SQUALLOSCOPE, PRESENTED BY FM4
The native Carinthian musician, songwriter and artist Anna Kohlweis began to release music in 2005 under the name of Paper Bird. Beautiful song-oriented pop music with sprinklings of field recordings that always conveys a sense of geographical distance and emotional closeness. After three albums Anna Kohlweis took a pause from her artist’s name in 2012 and released her debut “Soft Invasions” as Squalloscope. As part of the Seayou Record’s family, Anna Kohlweis is always on a quest for a new beautiful word creation in addition to her activities as a musician, visual artist and cartoonist.  This versatility and artistic output has impressed the music writer Susi Ondrusova since Anna Kohlweis’s very first studio visit at FM4. The interview with Anna Kohlweis will address the following anchor points: growth/ claims/scene/lo-fi/experimentation/timelessness.

15:00 WORTSCHWALL 3: SURVIVAL IN THE POP CULTURE. CHRISTIAN WERTHSCHULTE, PRESENTED BY FM4
Last December the German pop discourse periodical Testcard featured on its cover nothing more than an image of a solitary candle along with the simple title “survival”. As versatile and well thought out as the inside collected texts were, as little did this cover need the declaration: Ranging from making music, the music media, up to all the other forms of (self-) exploitation euphemistically declared as Creative Industries,  the romantic promises of the new, free digital age have created a practice of busy unemployment, which threatens to make pop culture a playground for other wealthy protagonists. Testcard editor Christian Werthschulte will come to  Vienna to dicuss with Thomas Edlinger (FM4) the causes and effects of this condition and to discuss strategies for survival.

13:00 WORTSCHWALL 4: ATTWENGER: OVERCOMING THE POP-PROVINCE, PRESENTED BY DER STANDARD
Regionalism and internationalism in the Global Village: A conversation with Attwenger about overcoming the so-called provincialism. And why a great world band is mostly equal to 5000 bad imitators. Moderated by Karl Fluch.

15:00 WORTSCHWALL 5: KEEPING RECORDS: INTERVIEW WITH DAVE SHEPPARD AND ANDI DVORAK, PRESENTED BY POPFEST VIENNA (ENGLISH)
With the rise of downloads and streams as the most popular formats of music consumption, recorded music has seemingly become obsolete. In contrary stands the stronger popularity of vinyl as an aesthetically and sonically fulfilling product, but also sentimental retro fetish, accompanied by the existential crisis of the CD once traded as the high-quality standard. The record retail market has become an elite specialty trade, pop recordings have gone from mass products to limited editions of arts and crafts. What kind of impact does this development have on the content or function of these recordings? Is the small vinyl boom we are now experiencing substantial or are we only dealing with the last flicker of a dying idea? Dave Sheppard is a music journalist (Mojo, BBC), musician (Ellis Island Sound), author of “Some Faraway Beach”, the definitive biography of the great pop esthete Brian Eno and co-owner of London’s subscription label Second Language, Andi Dvořak is the head of the Viennese independent label Fettkakao which specializes in vinyl . Robert Rotifer will lead the discussion with both in English.

17:00 WORTSCHWALL 6: INTERVIEW WITH PATRICK PULSINGER, PRESENTED BY MICA – MUSIC AUSTRIA
Live music is often regarded as the savior of a battered industry, but global sales figures may hide the facts of the local situation for organizers, musicians and operators of concert venues. Does this not also display the broad social development in this area – the rich musicians and big festivals are getting richer, but the poor are getting poorer? What is the situation for contemporary musicians in a city like Vienna with its rich concert landscape? Franz Hergovich (mica – music austria) will speak with Patrick Pulsinger about his experiences and his multilayered career as a musician, promoter, producer, label owner and curator.

The Popfest Sessions are presented by departure  – The Creative Agency of the City of Vienna. A Fair Music Conference in cooperation with mica – music austria and Popfest Vienna. Organization: Franz Hergovich and Tatjana Domany. All talks and concerts are  free to the public.