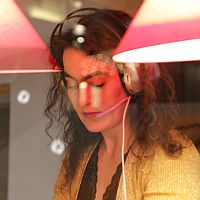 There are things that grow ever larger and the eventually break out of their confines and reach a point where a new perspective is necessary. It is exactly at this point that the composer and flutist Angelica Castello has found herself, with the release of her first solo, as well as fully self-composed album, “Bestiario”. Until now, she has found herself alongside a host of different musicians and formations, such as Billy Roisz or with Thomas Grill in duo, or with Maja Osojnik, Matija Schellander in the “Low Frequency Orchestra”. She has not only provided her services with the flute, but also recorder and other devices, and has, until now never given fruition to a fully self-composed and realized album, simply because she never found a good reason to do so. A Mexican native and having found a permanent home in Vienna, she explains, “On the one hand, because I thought, no one would be interested in my own music, but on the other hand it was also a very conscious decision that I took.” In any case, opinions can be changed, and that it was with the release of the first “Low Frequency Orchestra” album, and she became aware of the impact the making of an album had on her. Following her participation and experience with ever more recording sessions and album productions it became clear that there would come a time for her own recording of an album, for her own personal art and to capture a certain moment in time; a document which could encapsulate a certain phase in her life.

The moment came finally with a request from the avant-garde record label “Monotype” who asked if she wouldn’t be interested in the recording of a limited edition cassette. She accepted the offer and had decided that the moment had come. The project began to take form, and the work on individual tracks was intensifying, the compositions continually expanding, and with that came the simple decision to carry on with the recording of an entire album. The album “Bestiario” became a monolithic piece which, although heavily abstract, follows the telling of personal stories and experiences throughout its seven pieces.

But how exactly do abstraction and narration fit together? Simple— Abstraction is the only form that Castello can express herself, or wants to, as it were.  Much like a poem which the reader can feel the deepness of the evoked words and emotion, even when each personal may feel and understand something entirely different than Castello does herself, or anybody else, for that matter. Castello herself says, “The origin of the intention loses its importance” and that, “having a plethora of interpretations would be the best of all scenarios.”

Castello loves to work out different stories. For example the story of her childhood memory of a family trip to Acapulco, where she awoke after a long trip over the Mexican highway. “You awake to find yourself in a totally new and alien place: concrete, refuse, drunkards. And people hover around a single light bulb like a million insects. And in the middle of all this sits a gigantic red toad, just staring out at you.” A memory painted like something thought up by Edward Hoper, which lends itself perfectly for the kind of intense musical environments that Castello is so adept in producing. The experiences that find their musical form on “Bestiario” are imminently close and make a forcible impact, even when the creative origins remain a mystery.

Castello is herself not one to force things with a rigid sense of control. She remarks that the notes often find their own way or path, and that the location where she creates also plays an important role in musical creation. Her main source of expression remains her flute, a unique custom instrument made by Herbert Petzold, which is a cross between a block flute and an organ pipe, and which can be cajoled into forming myriad sounds, which she makes following her intuition, much like the creation of a sculpture. “The sound stands by itself”, she concludes.

“Bestiario” can also be seen as the impetus for Castello’s solo project, and the creation of more albums to come. She remarks, ”I had completely closed myself off to recording albums, but now they are so much fun to make.” She has already received other album requests from record labels, and more recordings will surely follow, which isn’t to say she still won’t be participating in her other projects. For example, one project which is very near and dear to her heart is the cooperation with Burkhard Stangl and Martin Siewert. Together they deconstruct love songs from the 1950s, and become “la doctora Corazon” of kitsch.

“I am letting more and more kitsch find a place in my music”, Castello says. Kitsch, which is under strict quarantine within Austria, finds a more open mind in Castello, who approaches it with the sensitivity of a foreigner. In Mexico, people can simply enjoy kitsch, the cheap thrill, which can make everybody feel happy. However, not only her Mexican origins, but also her academic training have paved a more opinion-free perspective towards kitsch, especially her studies of Barok music, which gave her a sensitivity for the nostalgic and sentimental.