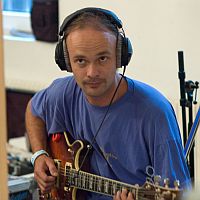 Is the village of Ottensheim an island of the holy? It certainly has the allure of such, considering the noticeable amount of outstanding musicians that hail from this small hamlet in the upper region of Austria in close proximity to Linz. Once a year the small community takes center stage while it hosts the open air festival, which is a cooperation between the local workshops Kapu and the organization, “KomA”(Culture without momentary Homebase). The festival is the bundling together of the most impressive talents in the region of Ottensheim, starting with the local Youth Community Center (JO). At the center of it all, and the promulgator for many activites is the renowned guitarist, bassist, trumpeter and composer, Christian Gatt, more well known as Gigi.

His most important and, until today, most active project is the band, Tumido, a duo with Bernhard Breuer, a drummer from the neighboring village of St.Martin. Tumido cultivates the art of Drum and Bass in the highest form, following the analog form of improvised music, which also finds itself often in partnership with the trio “Bulbul”. Beyond that, Gratt also incorporates Mario Stadler, another local Ottensheim musician into the boat, in order to record a “trumpet” album. Gratt also hosts and participates in a variety of other ensembles, including: “Braaz” (improvised music with Werner Zangerle, Marcus Huemer and Martin Flotzinger), “NI” (the same formation as “Brazz” but with two additional guitarists Manuel Mitterhuber, Tobias Hagleitner, the drummer Martin Flotzinger, and neo-futuresitic costumes) and “Gigi’s Gogos” and “Gratt’s Little Big Band” which are each decked out with three guitarists, bassists, saxophonists, and drummers. Fermenting in the back of Gratt’s mind is still the realization of larger, 50-piece orchestra, but for now that is still music of the future.

Until then, however, Gratt has enough projects and engagements to keep him busy. He is currently active in a Gypsy band, “Romanovastra” with Nica Stojka, is rearranging Drumski’s folks music in a new context, collaborates with the jazz-pianist, Günther Wöss into the synthesis of classical and jazz music, as well as developing and tsting a new three-stringed guitar from Cuba (“Tres”). He still always finds time to improvise and play with his friends such as Elisabeth Harnik, Dave Rempis, Mats Gustafsson, Hannes Löschel, Manfred Hofer and Bernhard Breuer.

Tireless, Gratt still enjoys playing solo shows, as well as composing a smattering of different musical scores, while collaborating with his musical colleagues from both Linz and Ottensheim (Zach Record) and the Ottensheim Choir, for which he has arranged music for 80 woodwinds.