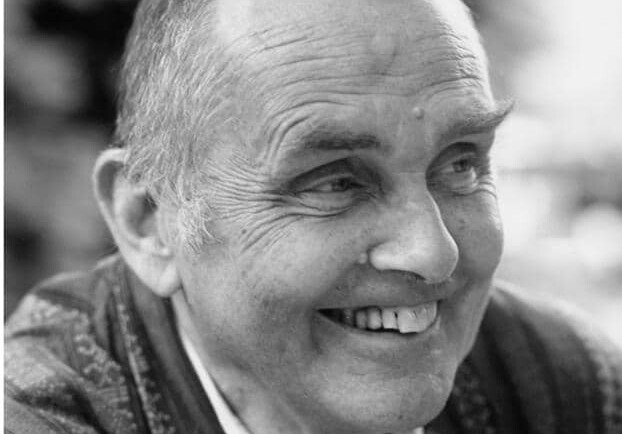 Sound-explorer, electronic pioneer and holdout. Hans-Joachim Roedelius is one of the unsung heros of pioneering experimental electronic music, who steadfastly explored a new medium of music without the notion of fame or fortune driving him. Despite his association with Brian Eno, the 77 year old Roedelius lives frugally in Baden near Vienna, and has from here, hosted and organized his musical festival More Ohr Less for many years.

It isn’t necessary to delve far into the past to discover that Roedslius’ work has been far less received and noted in his own corner of the world than in the international community at large. The German Wikipedia entry is hardly sufficient to the true status and importance of Roedelius’ stature and importance within musical history as one would expect to see. Whether as solo performer or with accompaniment, Roedelius is content to let the music speak for itself, even though as a juvenile musical talent he tended towards a more extroverted attitude. His earliest compositional credit can be found in the years 1938-1941, when he worked with then famed Brigitte Horney in two American film productions. Only since 2004 has the Berlin-born Roedelius become somewhat of a known figure within the electronic music scene, which has been spurred since his founding and hosting of the musical festival,  More Ohr Less and a music symposium in the beautiful Lunz am See. These events have become, year after year, a cultural fulcrum within the summer festival season.

Creation out of Chaos

At the end of the 1960s in both Berlin and Düsseldorf, a culture of creative and important musical output was formed, which gave rise to the first exports of German international Pop music. Notably was Kraftwerk, who recorded their first record with both traditional and a smattering of electronic instruments. At the same time, artists such as Roedelius, Dieter Mobius, Conrad Schnitzler (Tangerine Dream) formed a new collective under the name, Kluster, in which they forged new musical experiments starting in 1971, without Schnitzler, under the new spelling  Cluster. Roedelius recollects his time with Kluster, “At the beginning it was total chaos, actionismus, musical-actions. We made music from pure feeling, with no intellectual premeditation; we didn’t want to become famous. We didn’t want to be the inventors of a new musical language.” Dieter Mobius continues, “We couldn’t even play the organ correctly, we were all directed to making this kind of music, and it was clear from the very beginning how it would proceed.”

A Record That Set The World On Fire

Within their time together Cluster recorded and pioneered many of the sounds which would later dominate and become staples of the electronic music aesthetic. Similarly, with projects such as Harmonia (with Neu! Founder and ex-Kraftwerk member Michael Rother) and partner projects with Brian Eno such as Cluster & Eno, Eno-Mobius-Roedelius, and Harmonia 76’ the members sought to push the limits and breadth of electronic music, and which by the mid-1970s brought Cluster to be called “The World’s most Important Rock Band”. The first Cluster album is listed on the British Wire magazine’s list of  “100 Records That Set the World on Fire (While Nobody was Listening)”

The creative axsis of Mobeius-Roedelius exsists until today, and finds expression in a variety of projects, until two years ago still as Cluster. Since the middle of the 1990s and early 2000s the output of Roedelius’ solo-output has increased notably. Since the reissue of the early Harmonium and Cluster records on Herbert Grönemeyers Grönland label, the pioneering work of these early electronic artists has regained attention and renewed interest in the frontier of early German electronica.