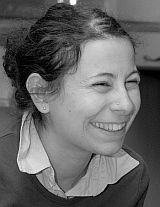 Manuela Kerer is an Italian composer currently living in Innsbruck, who grew up in Südtirol with German as her mother tongue. Although she managed to accomplish completed studies in composition, psychology, law and violin, nothing grips her heart like music, so she is currently dedicating more and more of her time to composition.  Her dynamic approach, which draws quirky influences from her multi-faceted career is strongly evident in her composition palette where she draws as freely from neuropsychological processes as from things that make her laugh. She belongs to the youngest emerging generation of composers in Austria being born in Brixen, 1980.

Kerer studied composition at the Tyrol conservatory in Innsbruck with Martin Lichtfuss, and graduated with distinction in 2007.  She has had scholarships and bursaries to enable her to attend numerous masterclasses and workshops, including further studies with Alessandro Solbiati in Milan.  Kerer has written for Klanspuren Schwaz, Ensemble ascolta, Stadler Trio, Landesmuseum Ferdinandeum Innsbruck, die reihe/Wien, Ensemble Windkraft, Ensemble Reconsil Wien, Next Step, pro musica, Bläserharminie Brixen and Tirol Festival.

Her artistic output thus far has been varied and eclectic, for instance her piece titled Aurimi for 69 Wind Players (6 Wind-paper flutes) and 11 percussionists for a youth wind orchestra where they made and played paper-wind instruments.  Her interest to collaborate and openly work with other artists is an integral part of her artistic palette: she has composed with other composers, and is also active in projects with visual artists where the connection of ear and eye fascinates her. With Hartwig Thaler, a sculpturist, she has worked with video montages, collaborating in many conversations and reciprocal presentations of their works.

Her first opera project was Rasura, in 2007 for symphony orchestra, 10 soloists, choir, and in 2008 the “Prozession der Käfer” was for string quartet, 2 singers and 2 composers, with Daniel Oberegger.  The strategy was to compose some scenes separately and then some together.   In 2009 she wrote a short opera “tickende polli”, in video – cuts, with an accompanying orchestra, an ensemble of 16 instrumentalists and 4 singer soloists.  It was an absurd theatre play, derived from a visit to the Senate in Rome.  Following this was a commission from the opera Frankfurt, a piece for 2 singers and cembalo, as a concert performance.  She has recently premiered, in summer, a short chamber opera in Munich, at the Prinzregenten Theatre.  She is currently commissioned to write a chamber opera for the Wiener Kammeroper for 2013.

Her works contain vivid and fascinating discoveries she has made with her many studies, a recurrent theme is drawn from her interest in the brain and neuro-psychology.  Plas (2008/9), dedicated to the violinist Bojidara Kouzmanova, who premiered the piece in 2009, written for solo violin and ensemble opens with the violin expressing an unstable drone which proceeds to unravel and corrupt layers of sound colours, collapsing often into annoyance and roughness, if one can speak of music in such a way.  On first hearing this piece seems to contain an animalistic edge which corrupts back into itself, which is perhaps due to the nature of the energy of where the composition was conceived.  Kerer in this piece, takes her particular interest in the brain and neurology quite literally, where she has actually included “brain wave” graphics, incorporating real-time graphics into the score.  This was a unique use of special brain waves, containing disrupted movements.  In other pieces, for instance in the string quartet Monddüne, Kerer has incorporated brain waves of people sleeping.

These techniques serve to add flavour and nuance to her ideas, and are particular here because of the psychological implication the musician needs to confront in order to interpret the material.  It seems to highlight the openness of Kerer’s composing, in the sense that she desires to use unconventional methods when it brings a deeper relationship of communication for the resulting art itself.  She describes that these wave patterns, scripted into the violinist part, are simply a means to communicate to the violinist more accurately the nuance of the desired sound colour.  They are instructions to determine a certain technique that needs to be used, for instance, vibrato, or where the bow should make contact on the string, bringing effects which change timbre, to allow a more tangible sound colour.

Kerer describes herself as a realistic person, who thinks that a good cost-effective approach with composition is important.  You need to make certain compromises, as the time for both ensembles and commissions can be very short.  Perhaps it is partly this pragmatism that is helping her quickly amount to an innovative and interesting sound practice.  She has recently been awarded the Theodor Körner Prize and SKE Publicity Prize to enable her to continue her numerous compositional projects.