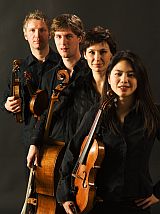 The radio.string.quartet.vienna is an ensemble that is always full of musical surprises and is not satisfied with the reproduction of the familiar, but always tries to tread new paths, no matter how unusual they may seem. With their classical music backgrounds, the four musicians understand themselves as innovators of different forms of performing, as musical free spirits, as explorers driven by curiosity, always on the lookout for new challenges.

The four instrumentalists – Bernie Mallinger (violin) from Carinthia/Austria, Cynthia Liao (viola) from Taiwan, Asja Valcic (cello) from Croatia and Igmar Jenner (violin, filling in for Johannes Dickbauer) from Berlin/Germany – strive to create their own scope of freedom with no fear of contact. Instead of repetition, they rather interrupt retracted listening habits, in order to reach new shores and to prevent themselves from getting lost in randomness.

From the very beginning, the aim of the musicians was to get rid of the constricting corsets of classical music in order to open up to new musical ideas and perspectives. Their joint project, the radio.string.quartet.vienna, stands for an open approach to a variety of genres and to unlimited creativity. Ever since their most unique and spectacular interpretation of John McLaughlin’s “Mahavishnu Orchestra” at the Berlin Jazz Festival in 2006, the musical intention of the formation has been made audibly clear. The quartet impressively demonstrated that jazz pieces work quite well according to the laws of classical music and vice versa.

Even John McLaughlin, the British jazz and rock guitarist, composer and founder of the “Mahavishnu Orchestra”, mentioned: “From the first note I was struck by the way this group has ‘appropriated’ my music and made it their very own. They even got the atmosphere which was present all those years ago. The other aspect that touched me deeply was the importance they attach to the improvisation, and they do improvise!” (From the liner notes of the album “Celebrating the Mahavishnu Orchestra”, which was released in 2007 and awarded with the German Record Critics’ Prize).

In 2008, the radio.string.quartet.vienna once again underlined its enormous versatility on the second album “Radiotree”. Together with the Austrian accordion/bandoneon virtuoso Klaus Paier, the four musicians tried to cover a wide musical range, from chamber music to jazz and tango and world-music sounds. With success. Again, the critics and music lovers were delighted and praised “Radiotree” with raving reviews. In the same year, the four musicians also drew a lot of attention to themselves as guest musicians on Ulf Wakenius’s CD “Love Is Real”.

In 2010, the most recent CD “Calling You” followed, probably the most successful album of the radio.string.quartet.vienna. Together with the Swedish singer Rigmor Gustafsson, the international ensemble developed yet another wide musical repertoire, which ranged from pop gems à la Paul Simon, Joni Mitchell and Stevie Wonder to jazz compositions and classical arrangements, as well as Swedish folk songs. “Calling You” even made it into the Swedish charts for a few weeks.

At the end of 2010, the violonist Johannes Dickbauer decided to leave the radio.string.quartet.vienna after years of collaboration, in order to devote himself entirely to his own projects. His spot was replaced by the Berlin-born violonist Igmar Jenner, who had already substituted several times for Johannes Dickbauer at perfomances with the radio.string.quartet.vienna.

Whether with Johannes Dickbauer or with Igmar Jenner on the violin, the pronounced openness for different musical styles and the love of experimentation and curiosity make it difficult to predict which direction the radio.string.quartet.vienna intends to follow in the future. One thing remains clear, this ensemble will never cease to surprise the listeners.