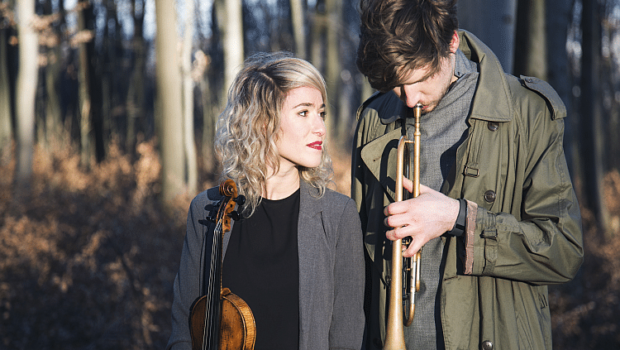 Julian Lacherstorfer and Simon Zöchbauer have made it their life’s work to give traditional music a new sound. A sound that artistically places it in the here and now. Together they are Ramsch & Rosen, and they have proven just how beautifully they can realise those goals on their new album “Bergen”

Julia Lacherstorfer (violin, viola, vocals) and Simon Zöchbauer (zither, trumpet, vocals) have taken a musical journey through their homeland. They sought out traditional music which they then reworked, reinterpreted and combined with their own compositions, breathing new life into old music. As with their previous album “Belver”, they accomplished this in an incredibly sensitive, artistic, and lyrical way.

The music of Ramsch and Rosen builds beautiful bridges between the past and present. Their work on “Bergen” opens the borders between the traditional and the modern. Their work lets styles flow into one another in a way that creates an incredible musical diversity. If one were forced to fit these creations into some subjective musical pigeonhole, “contemporary folksy artmusic” might, almost, fit.

Ramsch & Rosen focus on the essentials and approach the melodies, vocals and yodels of the past with a respectful humility. They employ a reserve that creates more mood and feeling the more quiet and melancholic it becomes. That doesn’t mean it can’t be danceable and exhilarating, but it manages to do that without falling into worn out cliches. They do that without avoiding the experimental and innovative, which gives the entire album some incredibly exciting moments.

“Bergen” is an emotionally gripping and magical album. Julia Lacherstorfer and Simon Zöchbauer prove themselves to be talented storytellers who use their musical skills to paint a fascinating and moving musical picture. The folk music that Ramsch & Rosen create is one that connects the local traditions with the rest of the world while adding their own exciting and impressive personal accents.