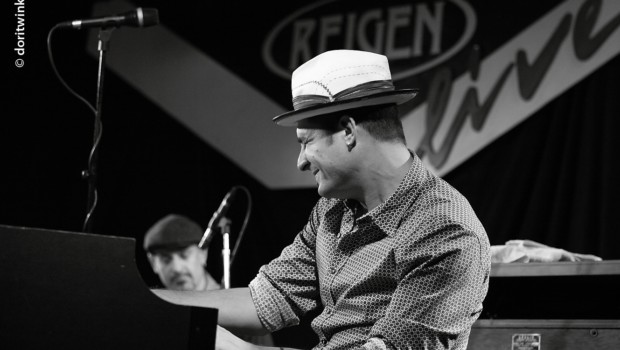 Raphael Wressnig is an excellent example of the fact that there are methods and possibilities beyond conventional didactical paths to establish oneself in the music world and to draw attention to oneself on an international level. His career is slightly reminiscent of the great Joe Zawinul, who once emigrated to the United States and came back as a celebrated star. Not only do these two share an intense passion for keyboard instruments, but also the love for soul jazz of the early 1960s.

Raphael Wressnig was born in Bad Radkersburg near the Slovenian border and already played piano at an early age. For him the piano was, as he says, „deeply boring” and he frequently thought of quitting. It was not until 15 or 16 years, until Raphael Wressnig slowly started reaching out to musical styles that really interested him. He gradually started to explore blues, soul, funk and jazz and experiment with different sounds on his keyboard, especially genre-specific sounds such as the Wurlitzer Electric Piano, Fender Rhodes, Hohner Clavinet or the Hammond B3 organ.

The distinctive and diverse sound of the Hammond B3 eventually had the biggest impact on Raphael Wressnig. “For me the Hammond is like a virus. The significant thing is that you can make a band sound “fat”. The Hammond is especially ideal in atrio line-up (without bassist). The slightly wider, undefined organ bass combined with tight drums really gets you fired up!” Soon enough, at the age of 19, Wressnig swapped his keyboard for a real Hammond B3 including the belonging Leslie (rotating speaker).

Unlike the majority of fellow musicians of his generation, Raphael Wressnig -apart from the piano lessons as a child- taught himself how to play his instrument with recordings of his idols such as Jimmy Smith, Jack McDuff, Jimmy McGriff, Groove Holmes, Hank Marr and in this way united phrases, expressions and playing methods with his own musical vocabulary. In addition to these pioneers of the Hammond B3 in jazz, soul and funk, he mainly learned from contemporary masters such as John Medeski, Larry Goldings, Billy Preston, Joey DeFrancesco and other prominent Hammond organ players during their many live performances.

Although Raphael Wressnig admits that this approach to music certainly lacks some of the theoretical background, he sees his musical creative process detached from the academic corset that can often paralyze you with “too much sticking to harmonies and scales, and less on natural methods.” For the listener it does not matter in which context the one or the other cool phrase stands to the chord. “Many of my colleagues who have studied – for example Lukas Knöfler and Georg Jantscher from my trio – tell me that during their studies they were so devoted to the classes, that it first took them a few years to break away. And only then were they able to start fresh and free as a musician, just as you imagine it to be, where it is all about the music.”

The path to becoming a professional musician almost happened by itself. Performances started increasing and soon Wressnig was able to make a living out of it, which sparked the decision at the age of 22 to finally pursue a musical career. Since then Raphael Wressnig has been traveling with different formations across the globe from the U.S. to Dubai, from Mexico to North Africa, from Russia to the Caribbean and back to Europe.

One of his central projects is the soul-jazz-bluesy “Organic Trio” with George Jantscher on the guitar and Lukas Knöfler on the drums, with the debut album “Manic Organic” released in 2002. In addition Raphael Wressnig operates several trio and quartet collaborations, among others with Sax Gordon, Alex Schultz, Jim Mullen, Enrico Crivellaro or Harry Sokal, with whom he plows the wide field of soul, jazz, blues and funk. Complemented with Horst-Michael Schaffer, Christian and Robert Bachner and Luis Riberio, the “Organic Trio” suddenly transforms into a panting, wild funk groove monster – also called “Raphael Wressnig’s Party Factor”.

Similar also happened with his second major formation “Raphael Wressnig & The Big Boogaloo Hornz” – although with another line-up including Josef Burchartz, Markus Ecklmayer, Sebastian Grimus, Gerald Pöttinger, Peter Legat and Silvio Berger – where R&B, jazz and boogaloo meet big orchestral funk and soul. Increasingly blue oriented, Raphael Wressnig  worked closely together for several years with the doyen of the Styrian Blues “Sir” Oliver Mally, where they covered the full range of acoustic to modern, electric blues in a duo and also with his “Blues Distillery”. The musical fruits of this collaboration were masterfully served on the five released albums and a DVD. Beyond that, Raphael Wressnig made an international  name for himself with numerous tour acts such as the blues singer and guitarist Larry Garner, an All Star Blues Band from Chicago including Billy Flynn, Kenny “Beedy Eye” Smith and Felton Crew, as well as other blues and jazz giants such as Louisiana Red, Phil Guy, Sugar Blue, Craig Handy and Pete York.

So far Raphael Wressnig has released around 15 CDs and has several times won the poll of the magazine “Concerto” in the categories “Best Blues Act of the Year”, “Best Jazz Album”, “Best Jazz Act of the Year” and “Best Jazz Musician of the Year”. In 2003 Raphael Wressnig took 2nd place at the International Jazz Organ Poll of the International Archive for the Jazz Organ (IAJO). “A great feeling and a great honor for me!“  We can only hope for many more, lush groovy-cooking jazz-soul-delicacies. Keep it up!
Georg Demcisin
(translated from German)
Photo: Dorit Winkler