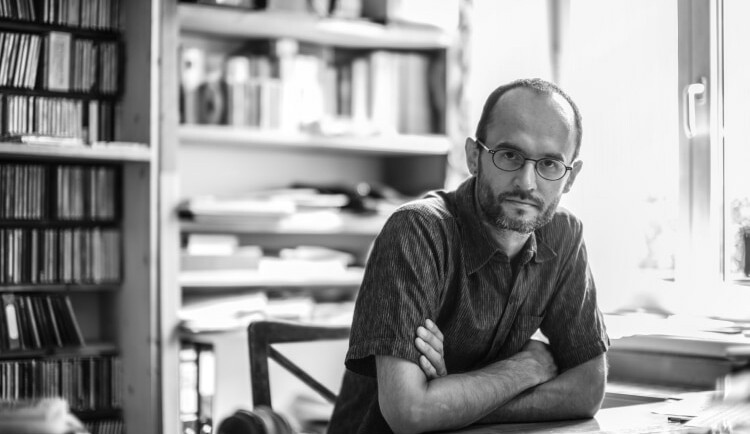 About a decade ago SIMON VOSECEK received the outstanding artist award for or his first full-length opera “Biedermann und die Brandstifter” [Biedermann and the Arsonists] – already at that time an indication of the importance of his work for opera production in Austria. He is now working on his fifth work for music theatre. Christian Heindl spoke with the Neo-Austrian.

It was with a grin of astonishment in January 2019, that the Prague-born Simon Vosecek received a letter from former Minister of the Interior Herbert Kickl, of all people, informing him that “the granting of citizenship is in the special interest of the Republic because of the extraordinary achievements you have already made and are expected to make.”– Perhaps a rare impulse of a federal government that is exposed to immigration criticism to want to anchor a “foreigner” in the country? – By no means. Rather the result of a longer bureaucratic process, in which relevant and competent personalities of Austrian cultural life emphatically advocated that the composer, still a relatively young, 41-year-old, should also be anchored here as a pillar of our current and future music scene. Since the decision was ultimately taken in such an extraordinary form, Vosecek now enjoys the rare privilege of dual citizenship (which is generally only granted to select people, for example, university professors).

For the staunch European and Democrat, who is now entitled to vote in the Czech Republic and in Austria, this is above all a confirmation that he is heard. That his work is not only acknowledged, but that it is recognised beyond a small circle of fans of new music. It should not be underestimated that such a gesture also gives support to a creative spirit when he devotes himself to composition and demonstrates a recognition that, nowadays, it is difficult enough for everyone in the creative field to find organisers, performers, let alone an audience.

To date, the catalogue of works at Voseceks contains around two and a half dozen completed works. He is not a “frequent writer” in the conventional sense, but one who creates with persistent consistency. From early on the medium of opera was a focus: the three opera sketches “Soudnicky” (German title: “Heiteres Bezirksgericht”), written in 1999, not only made it to the stage of the Prague theatre Zizkovské divadlo in 2000 in a production of the Prague Conservatory, but also to the Opera Festival 2001 in the Czech capital in the following year. A new production took place in 2008.

“[…] it already has everything a good comic opera should have.”

“Soudnicky” ran with considerable success with repeated realisations by the opera studio of the Prague Conservatory. The German-language premiere is still pending. The work was written exactly 20 years ago, but since then a lot has developed in your oeuvre. What do you think of this first work today?

Simon Vosecek: This is my oldest completed piece. Sometimes I’m amazed at it myself: It’s simply made, it’s funny and it already has everything a good comic opera should have. It’s a pity that it’s not performed professionally somewhere.

What could be the reason why this little opera triptych, which was so successful in Prague, did not succeed beyond the borders and what possibilities could you imagine, for example, in this country?

Simon Vosecek: In the Czech Republic, successful things rarely have consequences. I am partly responsible in the fact that no performance has yet taken place in Vienna, because I once neglected to respond adequately to an inquiry. The productions of the Wiener Volksoper in the Kasino am Schwarzenbergplatz and the Theater an der Wien in the Kammeroper, for example, would be suitable settings. These sketches would be ideal for this Youth Ensemble.

Your breakthrough came with the world premiere of the Max Frisch setting “Biedermann und die Brandstifter”. This full-length opera was selected in 2008 from around 100 submissions for the Austrian Music Award. Nevertheless, it was not until 2013 that the Neue Oper Wien, under the direction of Walter Kobéra, decided to realise the project. For a musical stage work today, it is the absolute exception and not the rule that two further national premieres have already taken place in new productions: in 2015 by the Independent Opera at Sadler’s Wells in London and in 2017 by the Stadttheater Bremerhaven. How do you rate the performances and where does this work rank for you today?

Simon Vosecek: I think every production has its great strengths. That’s what is so exciting about various productions. In London, the opera was translated into English and proved its worth. Bremerhaven was a real repertoire performance at a municipal theatre, which I think was a huge success. But the greatest consequences were due to the premiere in Vienna. I can certainly say that almost everything that has happened since then has something to do with it. This has resulted in further productions as well as past and current projects.

The direct consequence in Vienna was your next opera “Hybris” on a libretto by Kristine Tornquist. This production by sirene Operntheater premiered two and a half years ago at the Vienna Chamber Opera. What do you think of this work, not least with regard to its positioning in relation to “Biedermann”?

Simon Vosecek: “Hybris” was a continuation of the “Biedermann” path and a confirmation for me. In my opinion, this is my best score to date, but another performance has not been discussed yet.

But obviously you have made the most of the situation and adopted the material for your orchestral work “Hypnos,” which was first performed in May with the Prague Chamber Philharmonic under the baton of Ben Glassberg at this year’s Prague Spring Festival in the venerable Rudolfinum.

Simon Vosecek: Yes, I incorporated the ideas from “Hybris” into it. With “Hybris” I saw that a larger orchestra would actually be better for this music. I could now try that out for this new work. In itself, everything was rewritten. The original material is recognisable, but it was deconstructed  and assembled into a new piece. Recycling has become the rule for me. I don’t get played that often, and in this way I am able to hear the music from a piece more often.

What does this mean for the handling of the singing voices from the original opera?

Simon Vosecek: I mainly used the interludes from the opera. Sometimes, however, parts from vocal parts were assigned to instruments.

“I’m very happy with the score and i trust it will be a great production.”

The next big premiere is scheduled for this summer. On August 14 “Be My Superstar” will be premiered in Ghent. On August 21 and 22, 2019 it will be performed in Montenegro, and in winter 2019/20 there will be a European tour with performances in Aix, Luxembourg, Helsinki, Aldeburgh, Gent and Antwerp. It is based on the stage play “H. S. tragédies ordinaires” by Yann Verburgh.

Simon Vosecek: Yann Verburgh kindly provided his text, from which the director Alexandra Lacroix created her own concept and adapted it as music theatre. I then developed the music based on this concept, so to speak. It was a new experience for me to write a real opera, to invest a lot of time and effort and still not be my own master, because the priority of this project is more about staging and direction. Since it will tour, the cast is very small: one female singer, one male singer, four instrumental musicians and electronics, with the musicians playing from memory and acting on stage. I am very happy with the score and I trust it will be a great production.

What is the theme of it?

Simon Vosecek: It’s about school bullying, so it’s especially meant for young audiences aged 14 and over. The process should be interactive, i.e., involving the viewers. Before the performances, there will be a workshop where the young people will be “trained” to verbally attack the female singer.

You wouldn’t be you if there weren’t new ideas or a concrete project while waiting for a premiere.

Simon Vosecek: You mean “Ogres” – “man-eater”. This is also a stage play by Yann Verburgh, who also wrote the libretto. Like “Be My Superstar,” the opera goes back to my encounter with Yann in May 2017 at the TOTEM(s) Academy of the La Chartreuse Cultural Centre in Villeneuve lez Avignon. Both projects have developed in parallel. This piece was submitted to the Academy and selected for a production at the Avignon Opera House. Unfortunately, the project failed for the time being because the Opera House was ultimately not prepared to produce it. But the director showed interest in “Be My Superstar”. Let’s see if it becomes something.

How big is “Ogres” and what is it all about?

Simon Vosecek: Yann Verburgh makes the statement: “Homophobia, today and around the world.” – I find that quite apt. A great phrase that is representative of an increasingly pertinent story in France. The minimal line-up with which a tour was planned consists of five vocalists and seven instrumentalists. I think it’s a bit tight, but it’s still quite feasible. Of course a larger version would be better. I will write the opera in the next season without any production being assured, which is of course an enormous risk. At the same time, like Yann, I will be looking for producers. I am curious to see if anyone is interested. [On September 14, Simon Vosecek presented the project at the “Professionals’ Day” at the Musiktheatertage Wien]