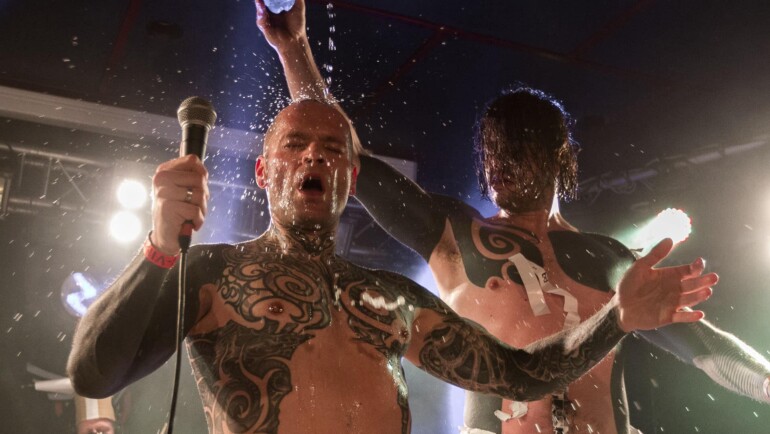 Between the 5-8th of October 2017, the Red Gallery in London will be the host for a combination of music festival, conference and art exhibition entitled ASSEMBLY OF DISTURBANCE. Curated by Test Dept, Aaron James, and David Altweger, the festival “explores how one hundred years on from the Russian Revolution, which unleashed radical artistic forces that sought to build an idealistic new society, the current socio-political climate is also engendering a need for a profound shift in governance.” The event will not only feature an exclusive live performance of material from TEST DEPT’s newest album, “Disturbance”, but also an opportunity to explore an interesting set of connections with Austria.

ON THE ROAD WITH FUCKHEAD

One of the bands chosen to be on the festival lineup was the Austrian band Fuckhead. Founded in Linz in the late 80’s as an industrial band, they have since become legends in the Austrian music, performance and media art scenes. A band whose name was inspired by a single released by Test Dept. A single called “Fuckhead”. That name was in turn inspired by a sculpture by the artist Malcolm Poynter. Malcolm Poynter designed the cover work for that release and has had his studio in Upper Austria for the last ten years.

Now Fuckhead and the artistic duo Stirn Prumzer will be transporting that same sculpture, “Rider of the Apocalypse”, from Aigenschlägl, Upper Austria to the Red Gallery in London. The transport itself will constitute a ritual performance, following a path across the battlefields of the first and second world wars. Performances will be made and documented at historically significant sites, and the resulting video and audio recordings will be used as the base for a live music and video collaboration with Test Dept at the Red Gallery. The material will then be released as an EP and accompanying materials.

Fuckhead had their beginnings in the late 80’s in the Kapu in Linz. Influenced by the works of artists like Test Dept, they were originally an industrial band. In the time since their foundation Dr. Didi Bruckmayr, Didi Kern, and Michael Strohmann have become an artistic institution in Austria. Their works have evolved beyond simple musical performance to blur artistic boundaries with an unbelievably corporeal expression developing on the tradition of Viennese Actionism. The bands members have been very active in the Austrian art and music scene, taking part in collaborations with the Wiener Festwochen, Ars Electronica, the Burgtheater and many others as well.

Stirn Prumzer are the photographer Kurt Prinz and the painter Christoph Sturmer. Two artists who don’t just cross boundaries, they break them. Their installations could be described as the visual equivalent of a Fuckhead show. Actually, they have become the visual component of the Fuckhead show, cooperating on live performances with the band to create an immersive audio/visual/physical experience.

Malcolm Poynter is British and studied art at Goldsmiths College of Art and at the Royal College of Art. His work has been exhibited at international exhibitions since 1973, including Tate Liverpool, Museum für Moderne Kunst / Stifung Ludwig Wien, and the Middleheim Biennale in Antwerp. His aesthetic has had a massive influence on generations of artists, and he himself has expanded from sculpture and painting into graphic design, video art, and theatre. For the last 12 years he has lived in Aigenschlägl, Upper Austria.

David Altweger aka Sagberg is a visual artist and director based in London and Vienna. Besides being a prolific director of music videos and experimental films he is an acclaimed VJ and projection artist, creating responsive art installations and sound reactive live visuals for tours, festivals and exhibitions. Since 2015 he is the visual director and member of the group TEST DEPT. He is also a founding member of art collective SALON FLUX which is part of the current exhibition at Künstlerhaus 1050.