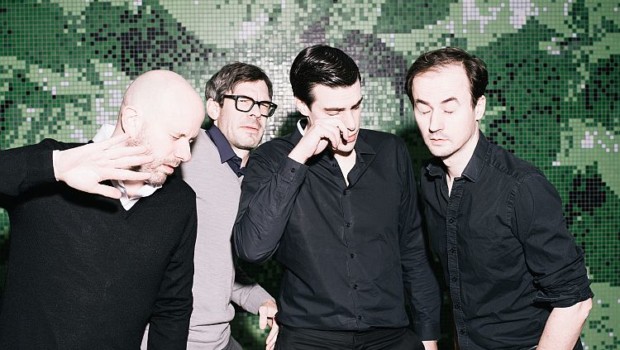 One young Austrian band after the other, creating songs with German lyrics, sometimes in Austrian dialect, establishes itself on the German-speaking music market and plays sold-out concerts. The strong emotions of the new kids in the Austro-German pop jungle are being heard. Compositions in Austrian dialect or slang, a slang which has long been viewed as primitve, have recently become cool, attracting attention and gaining fans all over the German-speaking realm. What is the secret of the success of these bands of mostly young men, who find fame with German lyrics? Dominika Krejs and Michael Franz Woels have listened to and clicked through YouTube videos to present a few representatives.

“THE NARRATIVE OF AN AUSTROPOP SONG IS TOLD FROM A PUB TABLE.”

A representative of unconventional and critical German lyrics who has been active in the Austrian music business for a long time is Franz Adrian Wenzel. He is known on the one hand from the noise-rock band Kreisky, who this year illustrated their fifth studio album Blitz with the two self-ironic videos “Veteranen der vertanen Chance” and “Ein braves Pferd”. He is also a shape-shifter in the Austrian “music show business” and responsible for the creation of the curious fictional character Austrofred, which he described in a skug interview in 2014 as follows: “I cross Queen numbers and above all Queen gesticulation – a grander, more international gesticulation than Freddy Mercury’s doesn’t exist- with Austrian gestures and texts. The narrative attitude of an Austropop song is classically that of a pub table. Someone’s telling you a story about himself at home: about his grandfather or the branded-for-life story.”

In 2015, the album “Unser Österreich” by Ernst Molden and Nino Mandl, known as Nino aus Wien, was a cross-generational project in the interpretation of Austropop classics. Branded-for-life stories by Wolfgang Ambros, Ludwig Hirsch, Georg Danzer, Falco, Sigi Maron, André Heller and Helmut Qualtinger were selected by the two dialect singer-songwriters Molden and Mandl and performed again.

Franz Adrian Wenzel sums up the current situation as follows: “Ten years ago most Austrian indie bands sang like Tocotronic. There are now, I think, quite independent bands, which wasn´t always the case and is probably also connected with various regional trends. It is a multi-faceted phenomenon between good and evil. By good, I mean the recognition of dialect as a full and equal language, the love of regional peculiarities. With evil, the dialect in the sense of ’Mia san mia’ (i.e. “We are who we are”), this rampant Lederhosen epidemic. I would say: Attwenger and Andreas Gabalier are the poles at either end of the spectrum, and everything else is in between.”

“THE ACCEPTANCE OF ACCENTED GERMAN LEADS TO A NEW SELF-CONFIDENCE FOR SINGING IN DIALECT.” 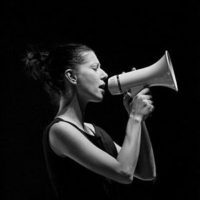 Eva Jantschitsch, known above all under her stage name Gustav, was also asked to assess the situation as one of the few outstanding women in the Austrian music scene. She has released two powerfully eloquent albums: “Rettet die Wale” (i.e. “Save the whales”) in 2004 and “Verlass die Stadt” (i.e. “Leave the city”) in 2008.

The play with clichés and the combination of minimalism and tradition are reflected in her work. In recent years she has worked mainly on theatre and film projects. Her current assessment of the German-speaking Austrian music scene: “What Ja, Panik and Kreisky started in the noughties, with their broad Austrian accent, has, in my opinion, already provided a boost and softened the acceptance of Austrian German for Wanda, Bilderbuch or Yung Hurn. This – that is my interpretation – also resulted in a new self-confidence for singing in dialect. For a long time Attwenger had a kind of unique selling point – at least in Austrian indie-pop – and now with Nino aus Wien and Voodoo Jürgens, among others, great dialect lyricists and performers have joined them.”

Bilderbuch singer Maurice Ernst claims to have released something like the first cloud rap song in Austria with the song “Barry Manilow” from their groundbreaking album “Schick Schock” from 2015. Nowadays, Yung Hurn is the most famous representative of the German-speaking cloud rappers in Austria, next to Crack Ignaz or Jugo Ürdens. He manages to express hedonistic sensitivities with a bare minimum of auto-tuned words. A female rap duo of this genre is Klitclique, who recently released their first album “Schlecht im Bett, gut im Rap”.

The genre also provokes parodies, as a satire video by actor and music cabaret artist Christoph Seiler illustrates. His very successful Austro-Pop duo Seiler und Speer is known for the sensational sing-along hit “Ham kummst”. The duo Pizzera & Jaus, who released their breakthrough debut “Unerhört Solide” in 2017, rock into a similar entertainment niche. Fun-punk rockers, who conquered the hearts and beer bellies of their fans with similar scorn, are Turbobier, who know how to describe alcohol consumption in all its variations and shades on their album “Das Neue Festament”.

Softer sounds and lyrics can be found on the album “Ich kenne kein Weekend” by the Styrian duo Yukno. The two brothers have taken a new musical direction, with casual, catchy synth beats, bass grooves and loops underpinning poem-like treatises on heartbreak and angst. Sad and beautiful childhood in “0043”, is what the singer Marco Michael Wanda would probably say.

Franz Adrian Wenzl describes the development of the band Kreisky as follows: “I would say we have defocused. With our first records it was important for us to establish our own sound, of course that is still behind it, the “grumpy rocker” thing. I don’t want to complain, because that’s great when you have a kind of brand. But it doesn’t limit me when writing songs, everything is possible, everything just pop music – limited by your own skills and your own tics, strengths and weaknesses.”

Here now a few examples of bands which stand out positively because of their rough edges: One is the trio Viech, whose “Ich hab viele Fehler gemacht” provided a prime example of how forcefully one can rock with German lyrics. The songs of the singer Hubert Weinheimer of Das Trojanische Pferd are also pleasantly wild and brutal.
According to the Upper Austrian trio folkshilfe, the use of the accordion, though sometimes polarising, seems to be what makes their songs popular, like the sing-along song “Maria Dolores”. Another likeable new presence incorporating the accordion is Buntspecht, who mix swing and bossa nova, Wienerlied and folk. The dialect formation Skolka, with more brass in their backline, have also found their fans.

“THERE IS NO VIENNA SCHOOL IN THE SENSE OF A HAMBURG SCHOOL.”

The legendary 5/8erl in Ehr’n, the charming couple Wiener Blond and Granada are good examples of “the new Wienerlied” which keeps popping up in the media. Voodoo Jürgens exhumed and reclaimed the title of balladeer for his kind of music-supported storytelling as in “Meine Damen, meine Herren”. Recently, newcomer Josh shot to the top ten of the European Border Breakers Chart with his track Cordula Grün.

Still, Franz Adrian Wenzl puts everything into perspective with a look at Germany: “To be honest, I don’t know whether there is a ‘German-speaking Austrian music scene’. There is probably an Austrian scene and there are people who sing in German, but this is not a ‘Viennese School’ in the sense of a ‘Hamburg School’, which was also strongly discursive, even among itself. Maybe the artists close to ‘Austropop’, like Nino aus Wien or Wanda have more connections, also in a personal sense, I don’t know exactly, I see Bilderbuch or Ja, Panik more as freestanding actors, where the language is not Austrian.”

Of course, the work of various labels is also very formative, especially Problembär Records. Founded by Stefan Redelsteiner, its first release in 2008 was – nomen adque omen, the name as a forerunner – Neuschnee´s crossover chamber music album, called “Wegweiser” (i.e. “Signpost”). Neuschnee still hasn’t melted years later, but they have released another album this year with Okay. Furthermore, it’s worth to take a look at the releases of labels such as Futuresfuture and Karmarama.

“MORE COURAGE AND WILL FOR POLITICAL POSITIONING.”

In conclusion, what does Eva Jantschitsch, who is currently busy with the music for a new play by Christine Eder (working title: “Defence of Democracy”), want from the musicians in the (German-speaking) Austrian music scene in general? “More courage and will for political positioning. It would be important to take a very clear stance right now. We live in a state of political emergency. It’s not “Shut up” time. I am glad that there are artists like ESRAP or Kid Pex, Texta or Yasmo who don´t beat around the bush. There is also a network of left-wing musicians who actively participate in demos. These are very important signals.”