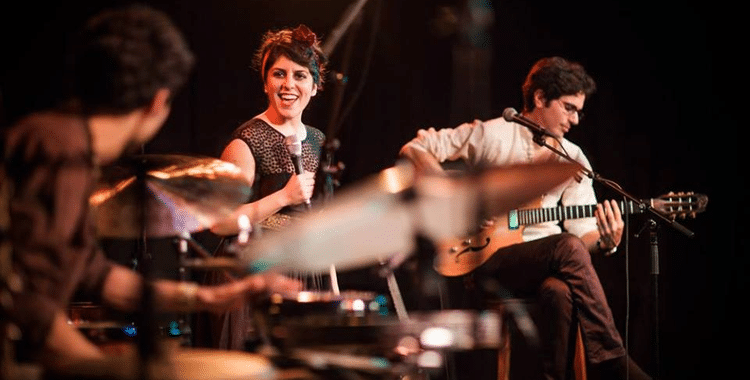 Sehrang, meaning tri-colored in Farsi, is an Austro-Iranian trio that shares the common vision of creating a new sound that blends the power of Persian music with the energy and diversity of Europe. Led by singer Golnar Shahyar, the Vienna-based group plays with various sound traditions and turns them into a modern, unique and multi-faceted sonic experience that transcends cultural boundaries.

Far from simply citing musical traditions, the three young musicians of Sehrang – Golnar Shahyar (vocals, percussion), Mahan Mirarab (guitar, fretless guitar, setar), Shayan Fathi (drums, percussion) – have a very open approach to various musical styles and consciously work on a fresh and new version of their own. Of course the musical roots of the trio always shine through, but these are translated into a sound that goes far beyond the mere repetition of stylistic origins.

In their music, the members of Sehrang are very deliberate about building bridges to more distant musical styles and combining sounds that at first may seem quite unusual. Thus, the sound of Sehrang not only refers to music from Persia, but also includes elements of jazz, folk, hip hop, rock, and pop. Despite this very ambitious mix, the trio impressively manages to give this immense variety a common ground and direction. The results are a fascinating breed of world music songs that have a very special groove with a verve and enthusiasm that is downright contagious.

This year in July, Sehrang will be touring the U.S., making stops in New York, Somerville, San Francisco (sold out concert), Berkeley and Los Angeles.