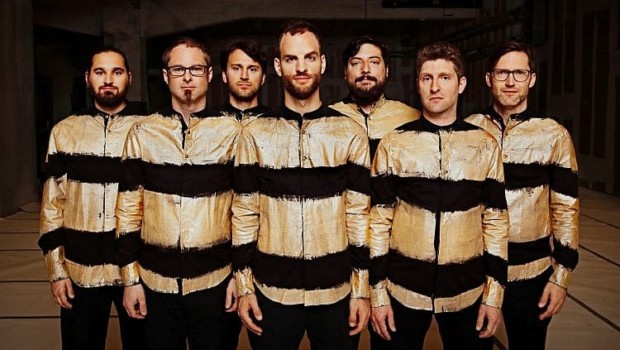 After the release of the first two albums “The Golden Fang” and “Rise and Rise Again“, the response from both the audience and the press was enormous. Rarely that much attention had been paid to a new and quite young Austrian ensemble on an international level within such a short period of time. It is not surprising that Shake Stew can now look back at an impressive tour calendar with acclaimed concerts at the Jazzfestival Saalfelden and the North Sea Jazz Festival in Rotterdam and with a multitude of performances at festivals in Morocco, Mexico, Canada and Turkey.

A creation that shines by its artistic and atmospheric freedom

Apart from the virtuosic playing of all participants, it is precisely the meeting of different musical influences that makes this album so appealing. There are modern drum parts inspired by drum ‘n’ bass (“Keep Walkin”) which were worked out down to the smallest detail, next to seemingly oriental and “bluesy” guitar sounds (special guest on the single “Grilling Crickets in a Straw Hut”: Tobias Hoffmann). On the recently released second single “So He Spoke” the impressive qualities of Shake Stew can be clearly heard as well. The slightly shifted timing, more specifically the phrasing of the trumpet and the saxophone gives the melody a wonderfully meditative, dreamy flow, which in addition is underlined by Mario Rom’s solo, while the movements of the double-bass-pulse guide the listener pleasantly through the skillfully staged sonic world of this piece. In that way this exceptional group manages to draw the audience deeper and deeper into the spell, in other words into the spirit of “Gris Gris” and creates an even more intense listening experience.

With “Gris Gris” the ensemble around bassist and bandleader Lukas Kranzelbinder presents a creation that shines by its artistic and atmospheric freedom and by its unpredictability, but at the same time always sticks to the central theme, the “spirit”. And therefore the ensemble never appears as arbitrary or simply put together. Only a few artists manage to move in such a convincing way at this point.

Alexander Kochman – translated from the German article by Julian Schoenfeld.