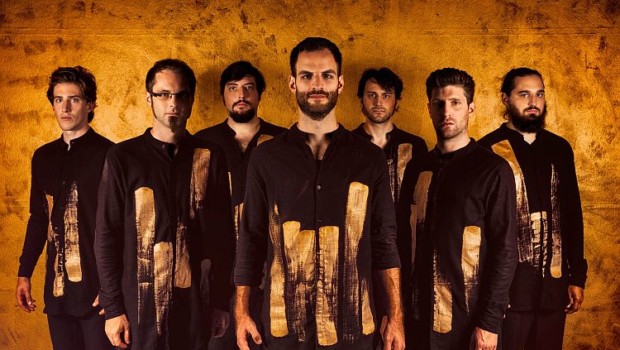 40 bands from 18 countries will be on stage at the international jazz trade fair JAZZAHEAD! from 19 to 22 April 2018 in Bremen. LUKAS KRANZELBINDER and his band SHAKE STEW will be part of the showcase programme on April 20 at the KULTURZENTRUM SCHLACHTHOF.

When you talk about Shake Stew, you are talking about one of the most exciting jazz formations in Austria at the moment. The critically acclaimed debut “The Golden Fang”, a memorable debut performance at the International Jazz Festival Saalfelden in 2016, and numerous subsequent concerts abroad (e.g. in Mexico, Morocco, Croatia and Germany) quickly made Lukas Kranzelbinder´s septet an internationally sought-after formation. The Carinthian bandleader and double bassist represents a modern and highly explosive interpretation of jazz that is detached from all stylistic questions.

Lukas Kranzelbinder and his troupe, consisting of the top class musicians Mario Rom (trumpet), Johnny Schleiermacher (tenor saxophone), Clemens Salesny (alto saxophone), Manuel Mayr (bass), Niki Dolp and Mathias Koch (both drums and percussion) deftly create musical arcs of suspense. In their numbers the band can just as easily let things casually groove forward as they can devote themselves to the reduced, dreamy, and elegant. The sound created by the septet is one that begins somewhere in a mysterious oriental style and reaches its destination through excitingly playful ways. They take an approach that is rule-breaking and wildly improvised. Even a more traditional sound finds a modernised, fresh form in the works of Shake Stew.

Shake Stew have definitely made a sensational start that will hopefully quickly be followed by an even more successful sequel. In April the second studio album of Lukas Kranzelbinder and his colleagues “Rise And Rise Again” will be released. Just in time for the performance at jazzahead! in Bremen.

Many Austrian delegates – records labels, promoter, agencies and journalists – will join this years´s trade fair. Meet Austrian Music Export at the Austrian Booth (6D 13).You are very welcome to have some great business meetings and catch up with the great variety of music from Austria in a relaxed coffee house environment.