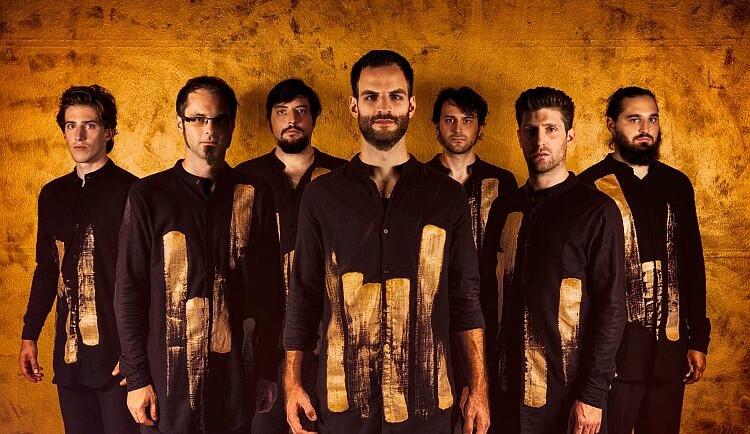 Quite a few people view this troupe as one of the Austrian jazz bands of the moment. The reason for that is evident on their recently released second album. With “Rise And Rise Again” (Traumton Records) SHAKE STEW once again deliver a stunning sample of the high art of stylistically expanded modern jazz.

Just formed two or three years ago, the all-star band centered around bandleader, double bass player and composer Lukas Kranzelbinder, has quickly developed into one of the hottest acts on the Austrian jazz scene. A memorable performance at the Saalfelden International Jazz Festival, a critically acclaimed debut album and sensational performances around the globe – the band played concerts from Mexico to Morocco – all contributed to Shake Stew’s launch on to the international stage.

“Rise And Rise Again” is the second coup from the Vienna-based band. And a first listening reveals that it will again find its way to the top. The album offers a jazz sound that is enthralling, seductive and simply addictive. Lukas Kranzelbinder and his congenial partners Mario Rom (trumpet), Johnny Schleiermacher (tenor saxophone), Clemens Salesny (alto saxophone), Manuel Mayr (bass), Niki Dolp (drums) and Mathias Koch (drums) basically pick up exactly where they left off on their debut “The Golden Fang”. Perhaps with the difference that they have sharpened their ideas even more and brought them more clearly to the point.

Shake Stew – who was assisted by none other than the exceptional British saxophonist Shabaka Hutchings – celebrate stylistic diversity on “Rise And Rise Again”. A diversity that is full of ideas and a unique style. The numbers of Lukas Kranzelbinder’s troupe grow into true experiences. One gripping moment follows the other, one suspenseful arc is condensed in to the next. Spontaneous changes repeatedly lead down new paths, into new musical environments. It is a musical event that remains exciting throughout.
The stories that Shake Stew tells are told with virtuosity and playfulness, a powerful groove, and quiet to mysterious moments. They develop a wonderful attraction and let one dive into another dimension with sweeping solo passages and unusual and sometimes exotic sound experiments. The beautiful thing is that the different elements merge perfectly into one another, they weave themselves into something very pictorial, which stimulates the imagination and releases powerful emotions.
If it was really necessary to prove the extraordinary musical qualities of Shake Stew, “Rise And Rise Again” does just that.