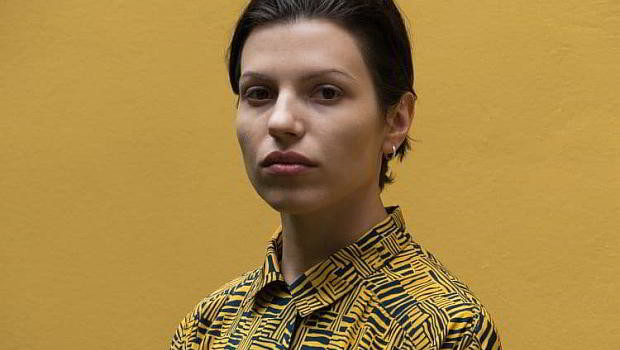 The Austrian musician and producer ANJA PLASCHG, better known as SOAP&SKIN, has released another album after six years: “From Gas to Solid/You Are My Friend” (Play It Again Sam/Rough Trade). It was already obvious in advance that this album would not fall short of expectations.

“What is in creation? If a god had left us to stay?”, sings Soap&Skin. Her album begins as a gas in which everything is still being formed – quite different from the stories it contains. In “This Day” there is no hint of serenity, light, or feeling of awakening. No. The song is full of doubts. It imitates whataboutism and instead talks about the great things, love, hunger and even a nation ready to jump. Soap&Skin doesn’t sing with the intent to accuse, but rather with tender exhaustion. Only the very last notes provide a shimmer of hope. Nothing gets better after that. Over the sparse piano, strings and pulsations of a drum there are tormenting words in “Athom” indicating conception and birth. Just when you wanted to avoid it, she sings, you are already holding it in your hand. Soap&Skin has mastered the art of suggestion. And how she sings!

As a teenager Soap&Skin painfully forced the words out of her mouth. She was called a “woman of pain” and a “siren of melancholy”. She had to learn how to sing again. For twelve years she was struggling to succeed in “Surrounded”, today even the most extreme tones sit just right. But they have become more rare. On “Heal”, the first single, the voice outshines the scattered synths twice. The fear is gone despite the scars. In the video you can see foam and sand, leaves and animals that break them down, you can see the micro and the macro cosmos. The world solidifies at the vertex of the album. Finally Soap&Skin lies like an embryo in this primeval landscape that can still form, the camera glides gently up into the sky.

AMORE AND FRIENDSHIP? THE SCARS, THE FEARS AND THE WORLD SPEAK AGAINST IT

The apocalypse begins a little later and heavy arpeggios drag an organ out of the deepest depths into life. In “Falling” flutes plunge to the depths, broad synths brace against them, but soon they die too, and heavy drums boom in – suddenly the metal pathos breaks completely, for a moment it feels like a children’s programme, as if the world reasserted itself: In art, pale people can scream five minutes with the fear of death, but Anja, you now have a daughter.

The story sounds quite good, a very young deathmentalist becomes a mother of good hope. It’s just not true. Soap&Skin stretches out her hand, the timbres are more organic, the voice is clearer, “Italy” is a lullaby as gentle as one could expect – but the world just hasn’t changed. We turn to the night and are swallowed by the fire, she lets a choir sing in Latin in the penultimate song, as a palindrome it is the same from the front as from the back, no matter how you turn it, it’s the same. She even puts her own unique stamp on “What A Wonderful World” at the end of the album. She sings the optimists battle-cry in a sigh, not as expectant as in the well-known original, but drowning: from top to bottom, from love, from pain, from friends, from everything.