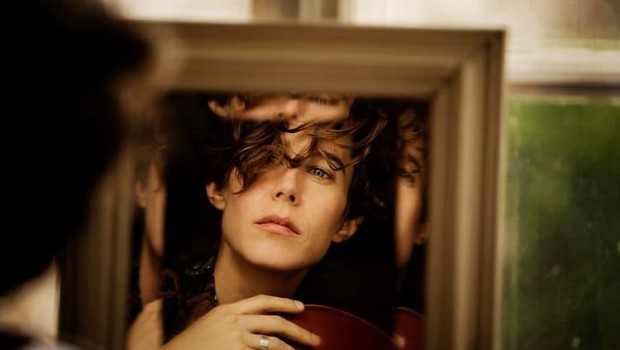 SOPHIE ABRAHAM has composed a piece especially for her performance at the KICK JAZZ Festival at the PORGY & BESS Jazz & Music Club (Vienna). It is called “Brothers” and it’s about the meaning of life after a painful loss. The cellist and composer spoke to Markus Deisenberger about a cutting-edge dance, improvisations in an empty concert hall and the fascination of ice-cold water.

As a 14-year-old you moved with your family from Holland to the Ennstal (Austria). What was it like then? Pure culture shock or not as bad as it sounds?

Sophie Abraham: It was worse than I had thought. We came from Groningen which is about the size of Graz, a rather urban city with many students. There we lived on the outskirts of the city. We knew the Ennstal very well, because our family had a house there and we spent every holiday there, but it still was a shock. Vacation is all very well. But when you suddenly live there, you quickly realize that you just don’t understand the neighbors.

What made you decide to go to Austria?

Sophie Abraham: My parents are Austrian. My father is a Germanist and was offered a professorship at the university in Groningen. He didn’t like the party system in Austria, so he decided to emigrate with his family to a more sober country. At heart however, my parents remained Austrians and wanted to spend their pension in Austria. Until then the whole family had lived in Holland for thirty years. I was born there.

In what way did this somewhat “sober” country influence you? The first musical socialization finally took place in Holland, didn’t it?

Sophie Abraham: Absolutely. In Groningen there was a fantastic university, the Haydn Conservatory. There were very good youth orchestras there. That influenced me a lot, and I missed this flair of great quality and high motivation in the Ennstal at the beginning.

Was it always clear that you were going to pursue a musical career, or did it simply happen?

Sophie Abraham: It was always clear to me that I would not do it. I always told myself: “No. Certainly not”. To practice was difficult for me. As a kid I liked to be outdoors, run across the fields with friends and do stupid things. It wasn’t until I was seventeen that I decided to try it. I know it’s a little confusing now. The bottom line is that until I was fourteen years old and living in Holland, I could already imagine it. But after moving to the Ennstal the option of a career in music became a distant prospect. My motivation went down to zero.

Sophie Abraham: Because I had no friends who were as serious about it as I was and who thought it was nice and cool to practice. I always reaped comments like: “What are you doing in there all the time?” When I was seventeen I switched to Andrea Molnar at the University of Graz. She brought my excitement and enthusiasm back again for practicing and making music.

“THE OTHER GENRES, WHEN I FIRST ENCOUNTERED THEM, LED ME BACK TO CLASSICAL MUSIC.”

Is it fair to say that in your career you first moved towards classical music and then away from it?

Sophie Abraham: In the Netherlands I became very enthusiastic about classical music – especially because of the youth orchestra. When I came to Austria this died down until I took a course with the band Folksmilch as instructor. That’s where the real, fantastic, down-to-earth, but also hip folk music from Austria and the whole world was taught. That was a real ear-opener then, because I noticed for the first time that you can play all that on the cello. I liked that. Something in me began to burn. The other genres, when I got to know them, led me back to classical music. That means, since I was about sixteen, seventeen years old, I’ve been playing other genres as well.

In other words, the broadening of horizons has at the same time led to a focusing?

You composed a piece especially for the performance at the Kick Jazz Festival at Porgy?

Sophie Abraham: Yes, it’s a program of my own, but not my first. I’ve composed a solo program before. It was called “Sophie goes down the drain” back then. When I was asked if I wanted to participate at the Kick Jazz event, I was very happy and just wanted to present something new there.

Sophie Abraham: The proportion of own compositions is much higher. I would say about 90 percent, maybe even higher. The new program is called “Brothers” and is a very personal one. I will musically speaking ask questions about the meaning of life, after death has come very close. In this respect, the tenor of this program is completely different from “Sophie goes down the drain”. At that time it was about the cheerfulness and sobriety of a brook. It was funny and light, and although “Brothers” also has light passages, the perspective is completely different.

Was a personal experience the cause to confront yourself with death?

Sophie Abraham: Yes, a very personal one. I lost both of my brothers when I was six years old. That changed all of our lives, my family’s life, and the lives of friends and acquaintances, forever. But it is less about my personal experience than about the emotions and the moods behind it. Anyone who has ever experienced loss can find him-or herself in them.

How difficult is it to bring exactly this topic onto the stage?

Sophie Abraham: That’s on a razors edge. I have to prepare myself mentally well for it and always think about musical professionalism to not let myself be carried away. It will be difficult, but I will succeed.

A video on your homepage has impressed me. It shows how you take possession of a space before you start playing in it. What role does the space play in a solo piece? To what extent do you have to consider the nature of the space when composing?

Sophie Abraham: Spaces are inspiring. I travel a lot with the radio.string.quartet. They are all pleasure smokers. After the concert, there’s drinking and smoking in the backstage area. But right now I’m a non-smoker and I can’t bear it there that much. So it can happen that I sneak away with the cello and sit down in the empty hall to improvise a little. It was there, in these situations after the concerts, alone on stage, that some of the pieces in the program were written.

Space has a very strong influence on ideas. Playing at the Porgy is special. Playing there is a pleasant, warm feeling. I’m really looking forward to that. Acoustically, I’m also bringing a new technique to this program in which I set up different reverb effects per piece, which I control myself. In this way I can play anywhere just as I imagine to. And maybe I will sit down again after the concert at the Porgy and improvise alone to recover from the intensity of the concert.

What about an empty concert hall is particularly inspiring to you? Is it the tension that drops, coupled with the emptiness of the room?

Sophie Abraham: You can still feel the energy of the evening and the people, but you are in complete silence. This is special.

How much of the program “Brothers” is planned or composed, how much improvisation?

Sophie Abraham: About 70, 80 percent are thought out, but there’s always room and space for interaction with the space and the audience.

What is composing for you? A journey where you don’t quite know where you’re going?

Sophie Abraham: Yes. The place of arrival is completely uncertain. I am an emotional person and an emotional composer. I play a part for so long and repeat it as often as necessary until I know where I am going. I concentrate myself at length on a certain idea until it feels right.

How does working in the quartet differ from that as solo artist?  Being on your own, is that more difficult in terms of creating and maintaining tension? After all, you have to hold the audience’s attention all by yourself.

Does that also give it a special appeal?

Sophie Abraham: Absolutely. You learn an incredible amount, also about yourself.

“THE RADIO.STRING.QUARTET INFLUENCES ME GREATLY, […]”

In the EPK of the last record of the radio.string.quartet, there’s a lot of programmatic talk about the fact that all of you want to move away from virtuosity and towards simplicity. Does exactly this also play a role when performing on your own? This purification? Concentrating on the essence by omitting non-essential accessories?

Sophie Abraham: When it comes to the topic of “Brothers”, a certain authenticity is required anyway. If you’re just tootling around all the time, you only detract from the actual theme. What is happening is meant seriously and isn’t a spotlight search. The radio.string.quartet influences me a lot, the way we are composing and the way my colleagues think about simplicity and authenticity, I carry that into other projects.

What else inspires you?

What made you do that?

Sophie Abraham: We freelance musicians are very dependent on being healthy. If you have to rehearse or play concerts being sick and can’t get well unhurriedly, you spend more time than necessary nursing your illness. So I was looking for something that strengthens the immune system without having to spend a lot of money on it. That’s how I came upon this cold-training and successfully completed it with a musician colleague. He started it for the same reason I did.

What effect does it have?

Sophie Abraham: It is mood-lifting and healthy because it is good against inflammations. When you step into ice-cold water, the first thing you learn is to calm down and not to hyperventilate. You learn to focus well. On the one hand you gain mental strength which is good for life, but the feeling afterwards is also tingling. A kind of high.

[Translated from the German original by Julian Schoenfeld, 2020]