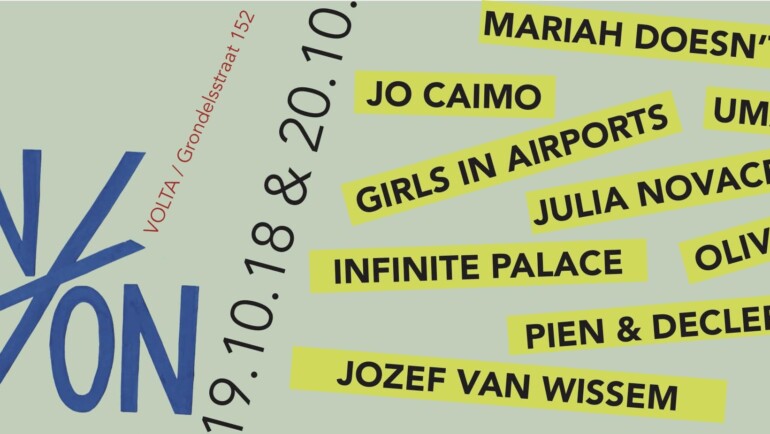 SON/TON is a twodays music festival that seeks out boundaries of its discipline creating a temporary space for collective experiences. From October 19th to 20th, 2018 artists from different countries come together in Brussels presenting their work in the centre of Europe. In the line-up one can meet the acts from Austria INFINITE PALACE, UMA, Vienna-based DJ MARIAH DOESEN´T CAREY and video artist and performer JULIA NOVACEK. SON/TON offers a vivid programme of performative concerts, musical installations and scenopgraphic performances.

Formerly known as „Crazy Bitch in a Cave“, Vienna-based singer and producer Infinite Palace is opening a new chapter with a new name but staying true to a love of genre-fluid pop songs and creating a space for questioning fixed identities. Known for his forward-thinking DIY queer pop and theatrical live performances, Infinite Palace shows a bit more restraint and introversion, but still has a foot on the dancefloor, where his falsetto vocals soar.

Mariah Doesn´t Carey is a Viennese based DJ from Lithuania. In her tracks she focuses on well tempered electronics mixed with the vastness of influences from world music and  and treasures from all around the globe.

Their music can be described as floating experimental electronic pop, mixing deep rhythms, bass sounds and vocal chants. Ella and Flo met during a turbulent summer in 2008 and since then got married, founded UMA in 2012 and released their first EP via Seayou Records (AT) and Enraptured Records (UK). The EP was well received by the press, earning them a review by WIRE magazine amongst others. Ella and Flo are building their own meticulous world of unusual melodies, off-the-wall electronic soundscapes in an atypical but infectious way.

Julia Novacek is a video artist and performer, studied Art and Digital Media at the Academy of Fine Arts, Vienna, and Applied Theatre Studies in Gießen. In her video- and performance based works she is interested in the construction and refraction of authenticity in Media and playfully cross-references herself as an artist.

SON/TON is a cooperation between BAGASCH, VOLTA and KULTUURKAFFE.
BAGASCH realizes projects of Austrian artists in Brussels. The goal of Bagasch is to provide a space in which artists can network on an international basis, creating new impetus for international music projects by young musicians.