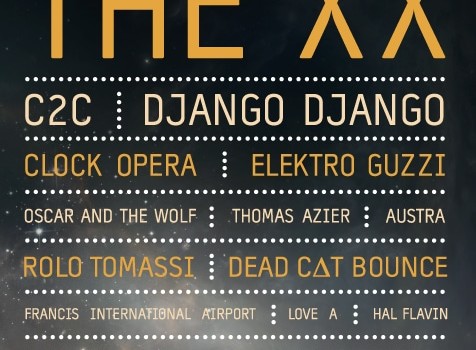 Located in Luxembourg, neighbouring Belgium, France and Germany, Sonic Visions Festival is an initiative of the Rockhal – Centre de Musiques Amplifiées. The festival is getting ready for its fifth edition that is being held from 23-24 November 2012 in Esch/Alzette. Each year a partnering country is in the focus of Sonic Visions and this year the festival will have a look at Austria! On the bill are two bands that need to be discovered by the public of the Greater Region: Elektro Guzzi and Francis International Airport.

By combining its 2 main activities as a concert promoter (by bringing international touring acts to Luxembourg) and as a Music & Resources centre (by acting as a structure that accompanies and assists young talents on their way to professional careers) the Rockhal positions the Sonic Visions Music Conference & Showcase Festival as a platform where the industry actually gets to meet the artist and vice-versa.
The Conference’s Leitmotiv is “It’s all about the Artist” – the focus is on the main asset of the music industry and gives artists and their team (mgmt, booker…) the opportunity to get the information and resources they need to take their project to the next level. The two days conference program starts on Friday the 23th November and will provide participants a global, comprehensive and intrusive view of today’s music industry and it’s upcoming trends.

During the night a selection of the most exciting local and international acts will perform at the Club of the Rockhal and at the Rockhalcafe. On the festivals bill the following bands are confirmed so far: The xx, C2C, Elektro Guzzi, Francis International Airport, Clock Opera, Rolo Tomassi, Thomas Azier, Dead CΔT Bounce and from Luxembourg Monophona, Synthesis and Seed to Tree. More bands tba.!

ELEKTRO GUZZI
Elektro Guzzi from Vienna deliver one of the most thrilling live performance models for techno and an innovative leap in the art of band performance at the very same time. While their instrumental approach is at the core of their aesthetics, it really doesn’t matter anymore if one sound comes from a guitar or bass or drum – it has all been merged into one sonic unit and all there is, is the music as a unified entity. While all the qualities of live performance are at hand – real time interaction, visual plausibility, instant miniscule adaptations – it is a radical break with what group performances have been about so far. (www.elektroguzzi.net)

FRANCIS INTERNATIONAL AIRPORT
These five boys from Austria were fed up with bands sounding like Beach Boys‘ Brian Wilson was kidnapped and forced to produce an album with a guitar from the supermarket and a broken tape recorder. After their debut album, the second coming is delivering densly woven indie-pop, with more bombast and integrity. Obsessed with all details of arrangement and production FRANCIS INTERNATIONAL AIRPORT became skillfull studio-geeks still preserving their love for catchy tunes with melancholic ambience.