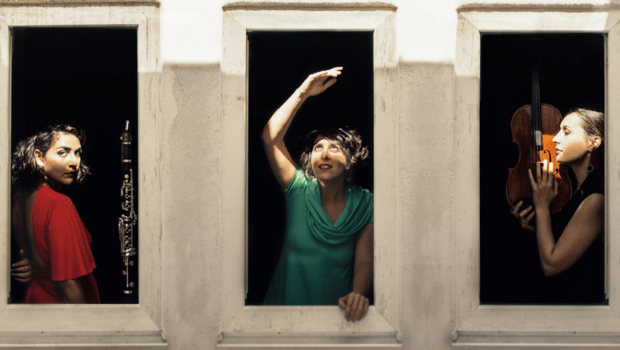 It certainly does not happen every day that Austrian bands hit the international charts. While the local music scene is blooming and gaining more and more recognition outside of national borders, it is particularly gratifying to observe Austrian acts ranking in the charts of various genres in various countries. This month the trio Sormeh have claimed the No.12 spot on the European World Music Charts.

Sormeh is a talented group of three musicians that endeavor to override all musical boundaries and oppositions. With their eponymous debut album (released by Lotus Records), Sormeh impressively demonstrate the art of creating excitingly new and innovative music, while at the same time respectfully integrating the traditional and supposedly old. Starting from centuries-old Jewish music, the music of the three artists guides us on an eventful journey through the various eras of history in different musical places (Bulgaria, Armenia, Greece, Persia).

The ingredients used by Golnar Shahyar (voice, daf, berimbau) and Mona Matbou Riahi (clarinet, vocals), both from Iran, and Jelena Popržan (viola, vocals, loops) from Serbia, are translated into their own vivid and lyrical world music language, ranging from old Jewish songs and chansons from the Levantine Sephardim, cabaret songs about the Balkans and the South East European sound traditions, to those of the Orient. Ever so often mixed with occasional improvisations and sonic experiments, every tone of Sormeh’s pieces is tremendously complex and multi-faceted. As each of these songs unfold, the listener is taken on an unparalleled musical adventure in a unique and mystical sound world.

Rather than exaggerating and forcing the means to reach their destination, the three musicians, who met at the Oficina Art Orchestra under director Alegre Corrêas and at projects of Mathias Rüegg, practice a deliberately restrained approach towards the matter. Instead of big sweeping, dramatic gestures, the trio focuses on very delicate, subtle and soulful sound work, which, embedded in unconventional and varied arrangements, sounds very refined, bittersweetly melancholic and sometimes quite mysterious. To summarize the music of this trio in a few words: Sormeh offer a wonderful and extraordinary listening experience that will hardly leave anyone cold.