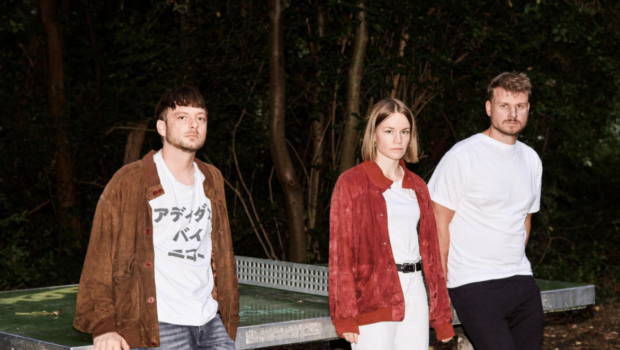 The FM4 Soundpark is a web-platform, community, and radio show for Austrian musicians. Every month, one act is selected to be highlighted both online and on air: The FM4 Soundpark Act of the Month. This month the honor goes to Oxyjane.

Life can be very mean: Imagine you start a band, make big plans, write lots of songs, work towards an album, plan a tour and then: nothing happens! Because a crazy pandemic interferes. Oh, yeah, that really happened!

Everything had started so well: Graz-based musician Selina Galka attended a Wolf Alice concert in Vienna in 2018. The whole show was fantastic, she herself was completely in a frenzy of happiness afterwards. Still on the way home, she euphorically posted a status message on Facebook: “Who wants to form a grunge band with me?”

A few loose acquaintances commented on the message, some sad smileys were also among the posts underneath. After all, grunge is long dead, isn’t it? But two interested people from the Graz music bubble responded to the call. Because somehow there was already something floating in the air: 1990s guitar music – that was already clear three years ago – would soon celebrate a major revival.

The first songs were written. A whole year was spent working on ideas. At the beginning of 2020, the first release was planned in the form of a debut mini-album with five songs. And then the newly founded band Oxyjane was caught ice-cold by the pandemic. Exactly on the release date in March 2020, the first lockdown was sealed, and the tour planned to accompany the record had to be cancelled. Life is not fair in these times. But for some people it sucks a little more. Selina Galka tells in the FM4 studio how her world suddenly collapsed at that time:

“That was really sad, that everything then fell through. For me it was very tragic, and I just cried for three weeks. Corona took all the wind out of it, back then everything just broke and was taken away from me.”

Instead of really taking off, everything was put on hold. A few summer concerts in 2020 and 2021 were possible, but that was only a small consolation. Fortunately, the songs from the EP “Mint Condition” made the rounds on the net and on FM4. So did the number “Carry Me Home.”

The video, shot by the band themselves, reflects quite nicely with simple means where the band is situated: Black, sloppily laced Doc Martens walk through the city in the video clip. The oversized jeans fit loosely. Carry me home. “Home,” that’s a state of being on the road. It’s life pulsating in a twilight state between day and night, in the streets and basement clubs of the city. At home, that is, in the best case, a warming piece of music that one carries under one’s heart, which trots along here in a relaxed 4/4 time, supported by heavy guitars.

Speaking of guitars: There are two of them in the trio Oxyjane, but no bass. Guitarist and singer Selina Galka writes the songs, Lukas Schneeberger plays the second guitar and Robert Wiese sits on the drums. The original idea has also transformed somewhat: The project Oxyjane comes across more pop-y than originally planned. Many influences are audible and are composed of the most diverse role models. There are Nirvana, The Strokes, St. Vincent, but also current music from the IDLES, Tame Impala and King Gizzard and the Lizard Wizard. Also the local Schmieds Puls are important and even partly to blame for the band name “Oxyjane”, as Selina tells us

“I sat in my room and covered ‘Don’t Love Me Like That’ by Schmieds Puls. While doing so, I pronounced and sang the word ‘Oxygen’ in such a funny way that my roommate said, just call yourself… Oxyjane!”

That may be a light-hearted anecdote, but in fact Oxyjane is a band that leaves little else to chance. They don’t jam, as they tell in the FM4 interview. Instead, they work specifically on the implementation of new song ideas. Selina Galka has completed a classical music education and knows exactly what she wants to get musically and how. When she talks about how she plays her guitar and how she composes songs, the interview quickly turns into a stimulating technical discussion about tuning bass strings.

Lyrically, the songs are all very introspective, such as the current single “Don’t Take it for Granted”: It’s about relationships, abysses, depression and the dark side of love when the magic has worn off, or in other words, been discarded, as Selina and Lukas tell it:

“There’s this whole relationship thing going on. You’d like to leave, but you can’t, you can’t do it. Not yet. It’s about being caught between what you want and what would be good for you. Everything could be so simple: If you weren’t you and I weren’t me.”

Such themes never come off as demanding or meandering on Oxyjane, however. Oxyjane perhaps keeps it more in the tradition of 90s icons like Mazzy Star or the Breeders: a powerful set of instruments carries the songs, over which harmonious and dreamy vocals tower. So the music, which today is also traded as a pioneer of the so-called Dream Pop à la Beachhouse. In many moments the voice of Selina Galka also has a lot of Nina Persson from the Cardigans.

A big tour is currently being considered, because in spring, the first longer album of the band will be released by Numavi Records. The record will be titled “0 2 9”. “Zero, Two, Nine”: this, like the band name, is a play on words. Pronounced a little faster and more flippantly, it sounds like “Serotonin.” First songs of the upcoming record have titles like “Heavy Heart” or even “Trash”. The songs sound wonderfully timeless, so that one can not classify at first hearing, whether this music was already created 25 years ago or just yesterday.

That’s the beauty of music that plays with references in a well-made way. It never sounds like a copy of a past time, but like an exciting, new idea of it. Like a variation that operates on a higher artistic level. Oxyjane are in the very best sense a band that picks up on the currently very present 90s hype and manages to bridge the gap between generations. Music fans who still lived through the 1990s will be able to relate to Oxyjane just as much as late-borns who are just celebrating this decade today.