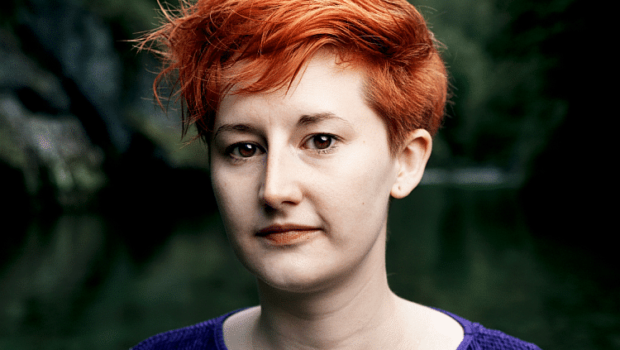 Her name proves she is a creative wordsmith, her album that she is a creative soundsmith. SQUALLOSCOPE sounds like a swarm of jellyfish in the deep sea and that is just the direction her new album “Exoskeletons for Children” (Seayou Records) seems to be heading. Tender but complex and hovering in the gloomy depths.

But the gloom is not a state of mind like sadness or dejection. It is a depth that seems to stand behind every sound Anna Kohlweis, aka Squalloscope, makes. It’s music that’s ripped out of time. It is extremely modern and angular but it also borrows from older genres such as trip hop.

AN ALBUM OUTSIDE OF TIME

This is also very much to be found in the song “Turmoil and Wonder”. The chilled but at the same time very tense atmosphere is reminiscent of songs by Massive Attack or Moloko. An impression that is strengthened by the use of her voice. Her voice dominates the song despite countless sound effects, all of which have their own unique character. Without her voice it would actually be “nothing more” than a collection of beautiful tones. But with it it becomes a lively, complex and yet surprisingly accessible song.

It is exactly that combination of complexity and accessibility that best describes “Exoskeletons for Children”. It is what brings it to the spheres of Björk or Fever Ray. A strong woman standing in the foreground, accompanied by unusual combinations of voices, sounds and melodies. Music as a playful work of art. You can look at it and be fascinated by its over all beauty, or you can examine it closely and recognize the individual details.

This also applies to the album’s opener,”Pando”. A sound collage that draws you directly into the world of Squalloscope. The structure is reminiscent of “Waking The Witch” from Kate Bush’s legendary album “Hounds of Love”. Voices and noises play an essential role in communicating with both the listener and the singer. But “Pando” becomes a completely different song than you would have expected at the beginning.

Although you can compare Squalloscope with many other great artists, one thing is clear: in the end she goes her own way. “Exoskeletons for Children” lives from its variety of moods. And because everything is centred on her voice, the album seems like a cabinet of wonders at an ancient fair. “Look here and marvel: This is the world of Squalloscope!”, the barker shouts. You are instantly drawn into it and captivated by the wonders within.