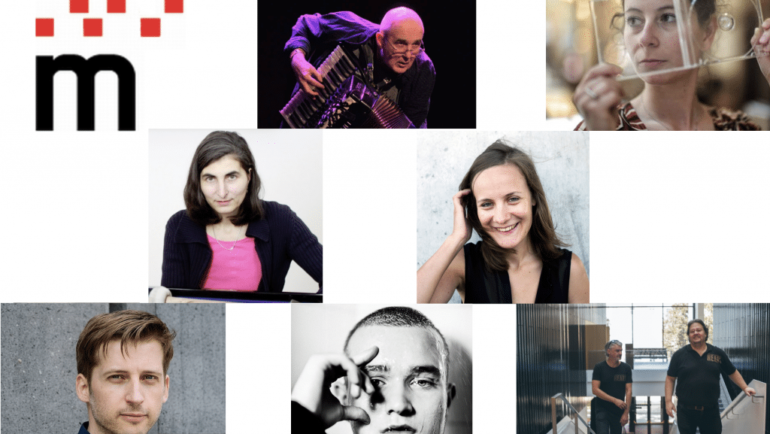 Since March 16th no more events are allowed to take place in Austria due to the Corona crisis. The local cultural scene is in a state of emergency. We asked how musicians, agencies, labels and curators are dealing with the current situation.

My last live concert was more than four weeks ago – it seems like an eternity, like from a time that exists merely behind a half transparent wall. Already accustomed to online meetings and concert streams I’m asking myself the question if (big) live events were now gone forever?

Peter Weibel wrote on March 20, 2020 in the Swiss newspaper NZZ about the first long-distance society in the history of mankind: “…but the games and concerts basically are not serving the local mass audience, but the non-local masses, the virtual worldwide audience, sitting in a decentralized way in front of TV sets and tablets…”.

This may have become true for large events, but for new and experimental music that does not deliver mass production and has always attracted a smaller audience, the immediate physical presence and correspondence between performers and recipients is essential. The physical and architectural space which inscribes itself as an “echo” into every concert, cannot be folded into a screen level, despite our training in the virtual handling of media.

A huge Red Cross ship lies off NYC and a field hospital is set up in Central Park. This reality of vulnerability is comparable to that of 9/11 and it marks a paradigm shift that affects the whole world almost simultaneously this time. A global lockdown of human society is the new scenario. What are we locking ourselves away from? Is the invisible virus “only” a catalyst for an unprecedented economic and social crash? What is breaking through and carrying us away cannot yet be estimated.

Control, the rise of a new nationalism, Big Brother, mistrust, poverty and dictatorship are sprouting from the ground with the same viral speed as the pathogenic germ itself. A horror scenario if we don’t see the chance for rethinking and redirecting everything in all this. Basic income for all, radical restructuring of transport, turning away from the neoliberal economic system in general are the imperatives of the hour. A re-evaluation of society is already taking place – the heroes are currently salespeople, nurses and carers, voluntary helpers…

What remains for the musician and composer in these days, apart from cancellations and postponing dates of planned concerts? Due to a teaching position at the University of Music and Performing Arts Vienna which can be carried out quite well online, I fortunately do not have to apply for the fund of hardship cases or the disaster fund for cultural workers. The financial loss is still limited. The positive thing is that I can work, listen, read and research in a slowed down way. Somehow it is also a respite from the restlessness between deadlines and appointments, from the usual pressure. At the same time, it’s like drifting on the open sea – clinging to some fragments of a “temps perdu” that are no longer useful, that cannot be put together again. Still no land in sight, a journey with an uncertain outcome.

The soundscapes in this quarantine period are changing massively, reduced noise everywhere, machines in a standstill. The silence of deserted streets and cities seems eerie, the silence of the almost flightless sky is pleasant. Hölderlin and his “silent ether” are remembered here in his anniversary year – more topical than ever.

By chance a few lines from Carlo Emilio Gadda are coming to my mind: “conoscere è inserire alcunché nel reale; e quindi, deformare il reale.” (“To realize is to introduce something into the real world, that is, to deform reality”).

Our reality is currently deformed to a great extent, but will an equally great realization/awareness result from this? In any case, hardly anything will be the same after this time of crisis as before, our perception will have changed. A huge potential for the arts and music.

We recently got the info that we can postpone the Heart of Noise festival into autumn (01.-03.10.) and the Haus der Musik has secured a week for us. Actually we wanted to announce the complete program exactly one day after the first Covid 19 measures were announced, but of course that didn’t make sense anymore. But a total cancellation was not an issue for us and so we are now trying to postpone it and hope that bigger events in autumn will be possible again.

Concerning the p.m.k. it looks like this: Due to the special structure of the p.m.k. as an active association of more than 30 cultural associations from Innsbruck which organize their events in the p.m.k. on their own responsibility and mostly on a voluntary basis, the loss of income due to event cancellations is limited. Financially most affected are musicians and bands as well as freelancers such as sound engineers and doormen. March, April and May are the months of the first half of the year with the highest density of events. In the p.m.k. alone, about 40 events with more than 100 acts had been planned during these three months, but now of course all of them had to be cancelled.

The two part-time employees of p.m.k. will go into short-time work and we have an agreement with the landlord to suspend rental payments for the event area. Of course, it is also important for our survival that subsidy providers do not discontinue or reduce their subsidies for programs that cannot take place. Not everything is quite clear yet there. It will also be exciting to see how the Corona crisis will affect future budgets in the cultural field.

After having gone through many different emotional states, I am now trying to find my own personal way through this period. I’m reading a lot, especially newspapers, especially comments from different people, which are making me aware of the many different opinions at the moment. It surprises me that this doesn’t make me feel insecure, but rather helps me. Nobody has “the solution” at the moment. It helps me to get ideas and suggestions from other people and to leave more room for my own thoughts.

For me personally it’s happening in a time in which many beautiful things were planned. After a quiet month of February, mainly dedicated to the preparation of the recording of an album with my band “June in October”, it now has to be postponed to September. A working title for the album has already been found two months ago: “Resting in Uncertainty”. What at first was a very personal topic for me is suddenly put into a completely different and larger context. An extensive tour with Christian Muthspiel’s Orjazztra had to be cancelled. Concerts with chuffdrone, Gnigler and Soap & Skin are partly cancelled or postponed. A lot of uncertainty is in the air. Besides the financial loss, which would have been a very important source of income for the whole year, this is above all – a great pity

However, I am increasingly aware of the privileged situation I find myself in. I appreciate that. I appreciate many things much more at the moment. And I long for more. To make music, with and for others.

I don’t feel the need to stream from my living room, but I did enjoy playing once from my balcony. I enjoy the fact that I can withdraw now, but I also quickly feel the pressure to be especially creative right now.

That’s why I have decided not to need to achieve anything during this period. I am always at the point of jumping from one project to the next, overworked and burned-out. Now I’m taking the liberty to slow down and to simply see what’s going to happen. Of course there are still some things to do, but there’s much more time for that.

I’m trying to adopt an optimistic attitude. In this special period I want to recharge my batteries, maybe compose, maybe dream and plan new ideas, maybe practice more again and get to know my instrument in a different way. And when all this is behind us, to be able go out again and share the newly-fuelled energy with other people. The idea of rehearsing, playing a concert again and recording a new album – all this fulfills me with great longing and anticipation!

How are you doing with sales of CDs and merch?

Retail is closed, Amazon is suspending CD distribution until further notice and all live concerts and tours have been cancelled or in the best case largely postponed. And our two most important releases of the last years have just been released – everybody will be able to figure out the rest.

What does it mean for you if Amazon, as recently announced, will not restock CDs and LPs in their product range due to the Corona crisis?

Amazon has developed a market power over the last few years which on average accounts for about 50% of sales of new releases. This was not our decision, but that of the consumers. We’ve been preaching for years that local retailers are our friends and I believe that in times like these, this is seeping into the minds of everyone related to fruit and vegetable vendors, bakers or even the record trade. Support your local store!

Which distributor are you using?

We distribute worldwide physically and digitally with RoughTrade/GoodToGo and have our own online shop.

I’m trying to turn perplexity into calm, besides

I should be able to pay for everything in April

As of April 3, I will be applying for different types of public subsidies

I would have been financially safe until the end of September, with a promising year lying ahead on various levels, with four projects, in solo, duo, trio and quintet formats, in Austria and Germany, adventurous first steps in new artistic constellations in Saarbrücken and Bavaria

(I’m making a living exclusively from playing and am doing everything myself to earn money via music, i.e. conception, composition, lyrics, CDs, marketing, promotion, booking, if necessary applying for subsidies)

From April 5 on, I’ll be working on sketches of lyrics and compositions for a new trio program, around mid-April together with my colleagues via Skype. The premiere was planned for mid-June (as part of the “Wir sind Wien” festival)

In addition, as of mid-April, booking attempts for autumn 2020/spring 2021, we’ll see what the organizers will be up to then…

Flooding various social media channels with free streams of living room concerts is out of the question for me. Maybe a special event instead of the cancelled Berlin concert for selected guests?

In the meantime I’m working on a new format…

I do miss the audience very much.

And the daily morning auto motivation is a big challenge.

A hearty Bonne Route to the round!

We freelance composers are being hit hard by the current situation. Every day we are getting cancellations for concerts, workshops and residencies, sometimes well beyond midyear. This represents a huge loss of fees and royalties for an unforeseeable period of time and therefore brings about uncertainty, existential fears, sleepless nights: yes, it’s all about bare survival! At the same time, art, culture and especially music make it much easier for people to stay at home right now. That’s why I am confident that there will not only be lip service but also real support for us, music creators, financially and beyond. Because culture is one of the gears of our society, and politics should be aware of that.

Of course it is a challenging time for everyone. Buuut let’s make the best of it – stay home and safe! I’m taking care of myself and thinking of the best way to act in this situation, to overcome it as quickly as possible.

Read the first part of our statement series here.