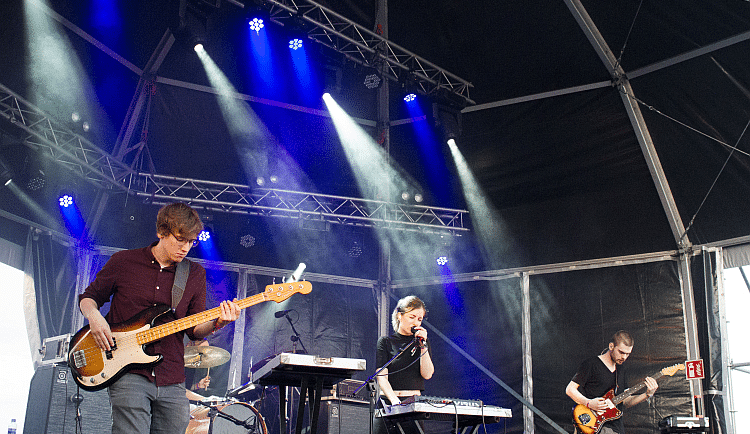 Things are going well for LEYYA right now. In April they won an Amadeus Award, in the summer they will be playing a lot of festivals. And in between there was a show at Primavera Sound, one of the most important festivals in Europe. For the band that’s business as usual.

As the sun set over the Parc del Fòrum in Barcelona, things started heating up on the Night-Pro-Stage. Leyya started in to “Zoo”, their current summery single. “Don’t believe what they say about me, don’t believe a word”. In the video Marco and Sophie are sweating so much that their tops are drenched. But things aren’t quite so bad here tonight. The band has a direct view of the ocean from their place on stage, and a cooling ocean breeze is coming in off the waves. Just about 500km of blue nothingness, and then, somewhere on the other side, Sardinia. A view that almost no other festival has to offer.

Leyya, the electronic duo from Upper Austria (or rather Vienna, now), and HVOB are representing Austria at this years Primavera Sound. The Spanish festival that – as the Süddeutsche Zeitung would later remark – represents “ambitious contemporary pop” like no other. This year over 200 bands, from the most current top live acts to old favourites and the most important up and coming newcomers. Bon Iver, Arcade Fire, Grace Jones, Sampha. Other than that it isn’t really any different to any other gig, and Leyya have played often enough to have a certain routine.

But it still has a certain something.

Leyya have enough showcase festivals behind them. The Reeperbahn Festival in Hamburg for example, or The Great Escape in Brighton. But Primavera is the largest festival the band has yet to perform at. At least, as far as Marco and Sophie can remember. Memories have begun to get a little vague in the course of their band career. But playing a festival is usually the same: get on a plane, check in at the hotel, check the equipment (something always breaks), perform, and head back to the hotel.

The countries and venues change, but only the highlights are really memorable. Like their show on the lake stage at the Viennese Popfest, or situations like their slot at a Baltic festival where the band played in a circus tent to a handful of people and ended up sleeping in a spontaneously organised, rancid, cellar. But even that’s all just part of the job.

A DUO AS THE MEANS TO A BAND

Things are going well for Leyya. At the Amadeus Austrian Music Award in April the band won the FM4-Award. They have written new material, and if everything goes according to plan they should release a new album this fall. Their attention is no longer just focused on Austria. This summer they have dates at home as well as Switzerland, Germany, and at the Sziget Festival in Hungary. A lot of festivals. And although each show is different, the preparation is always the same. “We prepare the setlist just before the show, and sometimes we forget them”, says Sophie. The interminable rehearsals take place in advance. On the road everything is spontaneous. At festivals, they leave the complex songs that require the audience´s concentration off the set-list, otherwise it’s all pretty similar.

So it’s not surprising that Leyya lay down an energy filled gig as the sun sets in Barcelona with songs like “Butter” from their debut “Spanish Disco”. “We could end up higher, but I can’t keep you safe”. But they also include some new songs. Their live lineup is no longer just Sophie and Marco, but also includes bassist Tobias and Florian, their drummer. That is relatively new. The band gives the live performance of their electronic, sometimes wavey songs an added push. It all happens live. In places it is simply grand pop, fitting for the setting of ocean, wind and sunset.

“It was always clear to us that we should move in the direction of a band”, said Leyya the day before. They had played a showcase at the conference in the city-centre and are relaxing before they begin to explore the Primavera Festival as guests rather than musicians. “The duo shows were just a way to get there.” The new songs only work in the band formation. That was always the goal. Making music as a group. And you can hear it.

In the background the ocean, while on stage the band begins the energetic but gentle “I want You”. “Falling out of plan again.” The air tastes salty. The people in front of the stage begin to sway, move to the rhythm, drink their beer. And slip, together with Leyya, into a magnificent second festival evening. For the band these 40 minutes end in more of the same. Back to the hotel, and then to New York for the NYC edition of the Reeperbahn Festival. And then on again.

Get on a plane, check in at the hotel, check the equipment (something always breaks), perform, and head back to the hotel…