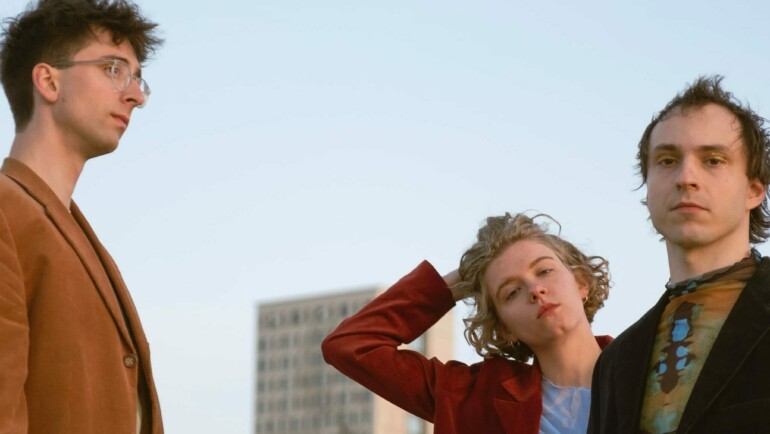 With “Surface” and “Edgy”, the Viennese synth indie-pop trio OH ALIEN released their first two singles at the end of May 2021. Since last week, their third is out – “Wear the Words”. The spherical, dynamic sound and Anselma Schneider’s voice entice you to think and dance in equal measure. Anna Lischka spoke with OH ALIEN (Rafael Henninger, Anselma Schneider and Luca Weigl) about diving into one’s own self, raves, inspirations and the future.

I heard you on FM4 and was surprised that there are only two songs from you. How long have you been around as oh alien?

Luca Weigl: We’ve been around as oh alien for about half a year. That’s when we started our social media presence. The first song came out at the end of May. Before that, however, we had been working together for quite a long time, for several years, trying to find a sound, to think about what we actually wanted to do.

Your first song “Surface” is about self-reflection and diving into your own unconscious. Do you want to tell more about that?

Anselma Schneider: Yes, with pleasure! I wrote the lyrics out of a feeling of always running in the hamster wheel, a feeling of doing all kinds of things, but still always just staying on the surface. And then there’s that moment when you decide to stop and look deeper inside yourself – what dreams, traumas, fears and hopes are slumbering inside you. It’s about the different feelings that this moment can trigger: on the one hand, an exuberant euphoria, but at the same time it can be very scary or feel like you’re losing control.

“But baby can you even swim,” – that line of lyrics refers to this, right?

Anselma Schneider: Exactly, in the second verse. Water as a symbol for diving in, like into a pool. And then there’s also the line, “let the insects in,” and the insects here stand for all these different secrets in one. Which can then also become a bit overwhelming.

Luca Weigl: When we play the song live, we add a part at the end where we really go off, get lost in losing control, and translate this feeling into music.

The video for this, a so-called lyricalizer by Lea König, is a work of art in itself. Did you give her something to work with or did she work freely?

Anselma Schneider: It was actually very free. Lea is a great artist and a friend of ours who works a lot with different materials in her art – especially latex. We thought that would fit the theme of the song, which is swimming on the surface and immersion. We were in communication with each other about little things, but the bottom line is that it’s her work. What’s funny is: lyricalizers – to our knowledge, that category doesn’t exist. There are visualizers, but what Lea has implemented so beautifully is the closeness to the lyrics. For example, I sing something about “spin” and something in the video spins. There are a lot of correlations between the lyrics and their abstract realizations. So we thought that lyricalizer is a more appropriate word.

In your second song “Edgy” you write about the struggles of today’s world and the questionable strategies to deal with them. What do you mean by that?

Anselma Schneider: Of course it can vary individually, but in the lyrics there is a line in the chorus that alludes to it: “You induce a rave, you’re fucking edgy”, that also has a certain irony. The rave is the exemplary idea of that. I had the image that I know well from myself and my circle of friends, when you party, everything seems edgy and cool, but in the end you might not feel so good about it. I find that exciting because the rave or partying stands for two things: it can be very nice, an expression of community and cohesion, a positive escape from everyday life, but it can also be something self-destructive. The image carries both, which is also alluded to in the next line in the song: “production of mystery, misery, minimize the tragedy” – how you try to come to terms with how shit everything is sometimes.

How do your songs come about?

Luca Weigl: Actually always differently. We write everything together, usually work on it together in front of the computer and also record it right away. Sometimes it’s a very fast process, but sometimes it’s also a slow one, where we keep trying things out, discarding them and recording them again. Most of the time, someone has an initial idea that we then work on together.

Anselma Schneider: With the kind of music we make – where you don’t just play with analog instruments – this writing process has become extremely varied. Suddenly everything just flows, and that’s why sometimes it feels like nothing flows at all. I don’t know if we’ll ever be the band that just has its flow for songwriting and producing. I can also imagine that it will constantly evolve with us.

Rafael Henninger: Our working process shapes the music very much. Lately, with all the computer work we’ve been doing, we’ve been letting the songs develop slowly, putting them together and positioning them. It can certainly be exciting to stop doing that in the future and jam more or to look more for the immediate in the music.

Luca Weigl: I think we all have very precise ideas about how something should sound and what we like or don’t like. And then it’s also very exciting to try to find a common denominator. But that’s what constitutes our music: that it sounds a bit different, that we all want and have to be satisfied with our songs, and that not only one person writes them.

The first time I heard your music, it reminded me of 5K HD. Which musicians have influenced you, what do you like?

Rafael Henninger: Yes, 5K HD, is one of the many great bands in Austria that have influenced us a lot in the last years. Especially their unusual arrangements were inspiring for us. The idea of making pop music with unexpected twists is very appealing to us, which is why our songs are often very dynamic and rarely have classical progressions.

Luca Weigl: Another band from Austria that probably influenced us all a bit is Leyya, also in terms of production and DIY – that is, just trying things out, doing things yourself and daring certain things. We currently always record everything ourselves and try out a lot. We think that’s a way to keep things under our own control. Internationally, we’ve been inspired by James Blake, Feist, Grace Jones, Andrew Bird and Radiohead, for example.

You started out analog?

Anselma Schneier: Yes, we had all kinds of other projects before that. All three of us have jazz backgrounds and we used to have quite classic band set ups.

How was it to play the first concerts?

Anselma Schneider: Yes, mega nice. It took a long time until we could finally play. Originally, the first concert was scheduled for May 2020. It felt really, really good. And also to finally be able to introduce oh alien to our friends. That was at Rhiz and it was crazy – just wonderful.

Luca Weigl: Above all, it was also good for us as a confirmation that it’s not only in our head, but that we really exist as a band. That oh alien has finally arrived in reality! Our first concert was at the Haldern Pop Festival in Germany. That was quite spontaneous and we even came back from vacation early for that. It was amazing to play our first concert at a big festival.

When will we hear more from you?

Anselma Schneider: On November 5th we will release a new single called “Wear the Words”. This is the first song we’ve written as and for oh alien, and we’re so excited to finally get it out into the world! It’s an encouragement song – for ourselves, but hopefully also for listeners. Until then, we still have a lot to do for the music video shoot. And then an EP with 6 songs will be released in spring. Then hopefully we can finally do a small tour. That’s something we’re looking forward to the most – and have been ever since we started making music.