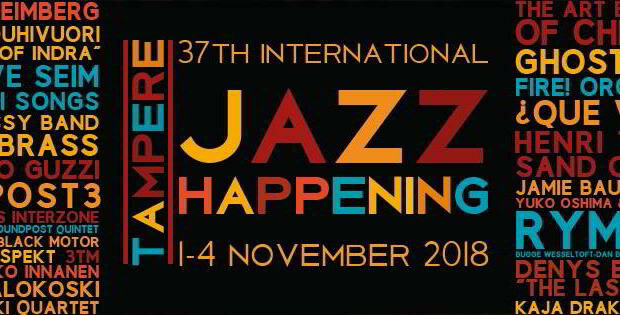 Tampere Jazz Happening 2018 will take place from November 1-4, 2018 on the stages of Klubi, Pakkahuone and Telakka. Altogether 25 international ensembles and orchestras will perform at the 37th edition of the festival. On the opening night, the festival puts a Spotlight on Austria, presenting some of Austria´s most promising jazz formations. One should not miss the chance to see Mario Rom’s Interzone, Kompost3, and Elektro Guzzi live in Finland!

Martin Eberle, Benny Omerzell, Manu Mayr and Lukas König, are experts in bridging musical gaps. Representing a young generation that has defied and overcome old-school thinking patterns, Kompost 3 treads a musical path that leads them to a very distinctive and unique sound. Their music is based on jazz elements, but also includes funk, bombastic art rock, sound art, trip hop, minimal techno and various forms of club music. Kompost 3 produce a mix that is definitely not very common adding a high level of variations into their numbers. The four unconventional free spirits have made themselves comfortable – roughly speaking – somewhere between jazz, funk, hip-hop, soul, electronics, (post-)rock and beyond. Their  art is creating uniformity out of diversity, producing a sound with the unmistakable signature of Kompost 3. A sound that actually demands a new musical name.

Playing the idea of techno with the means of a classic line-up was first conceived as a joke. Having experienced Elektro Guzzi live, one knows about the energetic qualities of the trio. Not to mention the ludicrous image-sound-gap which is developed in their performances. The acoustic venture already began in 2004. Techno in its purest form will be rarely mentioned as a major influence of the band. The three members of Elektro Guzzi feel rather at home in experimental music, also relating to their working process. Elektro Guzzi has been tweaking and refining its sound in the rehearsal room over many years. The way out, towards the audience, was first pursued when the band was sure about a homogeneous and coherent form and content. The overall quality of the band especially unfolds in the live situation. The analog approach with guitar, bass and drums can safely be described as creative purity. All sounds of minimal techno, including well-dosed dub sprinklers, droning from the speakers are exclusively generated live. Their latest album “Polybrass” will be out on Denovali Records on October 26, 2018.

Mario Rom’s INTERZONE is a band that has made an international name for themselves thanks to a reputation for first rate releases (“Nothing is True”, “Everything is Permitted”) and strong live performances. With Lukas Kranzlbinder on bass und Herbert Pirker on drums, the trio around trumpet player Mario Rom belongs to those groups of contemporary musicians who approach jazz in their own unique way. The result is a layered and multifaceted mix of traditional and modern jazz with elements of bebop, funk and swing thrown in for good measure. Mario Rom’s INTERZONE is one of those bands with a massive fun factor, a band whose entertainment value is particularly obvious when these three musicians take the stage together. The trio plays jazz after the motto “anything goes” with a special emphasis on improvisation, spontaneity, and communication. It’s a mix that has garnered rave reviews from the press. DIE ZEIT for example, has referred to them as “3 young savages, marked by a life they couldn’t have lived, capable of anything”.