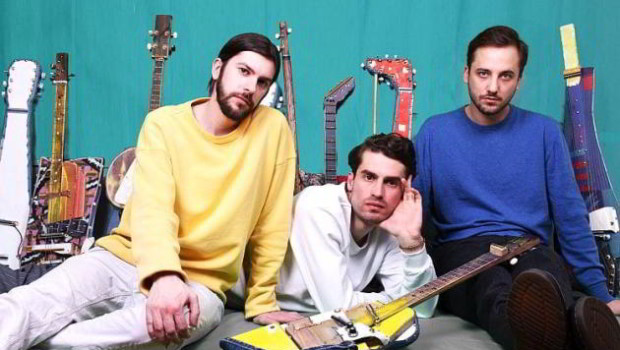 They bring a little post-punk to 2018 without sounding too old-fashioned. TENTS new album “Stars On The GPS Sky” (Numavi Records) is a merger of modern language and retro music.

Post-punk isn’t dead and, above all, it’s still not boring. This genre, which has its origins in the dark hours of the early 1980s, is surprisingly resistant to change. In other words: anyone who knows how post-punk once sounded, will recognize it over and over again. The sluggish bass, the melancholic vocals and minor key: all this sounds gloomy, but it is not profoundly saddening. One must not forget that the word “Punk” is also in the mix and this influence is especially evident in the vocals.

Thus the melancholic vocal melodies always imbued with a kind of defiance. As if the singer said: “I’m sad, but that’s none of your business!” That’s probably why post-punk still exerts such a great fascination, because it radiates a kind of thoughtful sorrow, into which one can empathize without breaking into tears, because the music is so dramatic and deeply sad. And this description of the oldschool genre also applies to the brand-new record by Tents.

millennial men that revive music from the 1980s

“Stars On The GPS Sky” is a post-punk album, but also much more than that. The band uses the old melancholy, the typical instruments, but also gives the mix its very own twist. That’s why the album sounds as fresh and modern as the three band members look. In their promotional photo they sit in gaudy sweaters and with normal hairstyles in front of a considerable collection of surreal string instruments and look a bit like what you expect today’s millennial musicians to be: In terms of aesthetics, they made use of the 1980s and 1990s, yet they still make music in the new century.

However, the influence of earlier eras is clearly noticeable. Just take the song “Secret Patio”, which is reminiscent of Adam and the Ants, only that the Tents keep calm and don’t lose control in the course of the song like Adam Ant. The synthesizer tones on “Cop Gloves” go in the direction of Gary Numan, but from the late 1970s. The lively guitar, the distorted vocals and the light Lo-Fi production, which places the drums in the foreground but makes them sound slightly dull, also speak for this.

The whole album benefits from a slightly “dirty” production, and not least the single “Sabbatical”. Here we are more in the early days of post-punk, when the punk aspect was a little stronger and the gloom was not yet quite as strong. Best comparison: The Cure in its early “Boys Don’t Cry” phase. To put it bluntly, this is the pop version of the post-punk world. It is music that can run in the background, but that can also thrill a large audience. Best of all, you don’t sink into an exuberant happiness or into a sea of grief. It’s a nice in-between.

And that’s exactly what makes “Stars On The GPS Sky” a kind of summer album. It invites you to dance through the streets of a strange city at night (“elevator”), it motivates you to shout your emotional ballast out the window (“dusk”), and it even offers moments for slow-dancing with your beloved (“stress”). Tents have created an extremely coherent album, whose individual tracks are nevertheless very different from each other. And that turns “Stars On The GPS Sky” into an absolute keeper.

Anne-Marie Darok (translated from the German article by David Dempsey)