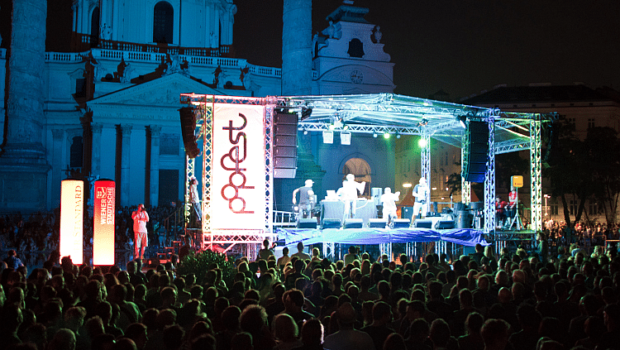 “There are countless pop festivals around the world. But not very many take place in the beating heart of a cultural metropolis.” said Andreas Mailath-Pokorny about the 8th annual POPFEST WIEN. “And thanks to a lively and diverse scene, the pulse of this urban heart is going to be seriously raised by around 60 concerts. Because, and this isn’t something we have only known since Falco, the famous golden Viennese heart doesn’t just beat for classical music, but has always had a special place for dignified, self-assured, pop.”

From the 27th-30th of July, the Karlsplatz in Vienna will once again be transformed into a pulsating festival space to present the diversity of the Austrian music scene. “The Popfest aims now more than ever to connect the musical worlds, from less known pop genres to quality mainstream.” says festival director Christoph Möderndorfer. The festival curators Ana Threat and Eberhard Forcher took up that challenge. “While Eberhard is well connected with international and mainstream Austrian acts due to his work as radio DJ and ORF music scout, my focus is on niche acts and the local DIY scene. The combination of these apparent extremes might seem risky to some. We certainly thought so at the beginning. But we united to tear down borders in 2017.” said Ana Threat about this years program.

This years opening concert on the “Seebühne” in front of the baroque Karlskirche scores with high quality groove and energy: Hot reggae-dancehall from Mono & Nikitaman meets advanced bass music from the 20 year old sound designer salute who has been operating in the network of global beats from his current base in London and will be bringing his current vocalist Liv Dawson to Vienna. The night will be opened by the rappers from Salzburg, Scheibsta & die Buben.

11 OPEN-AIR CONCERTS AT THE SEEBÜHNE AND MORE HIGHLIGHTS

After the Thursday opening the Seebühne will focus on the regional idiom. From Bluatschink out of Tyrol, over the global folklore of Tini Trampler & das dreckigem Orchester to Der Nino aus Wien and Flut, the current hype band from Linz. Saturday will start with the Stimmgewitter Augustin and continue with a metallic double header from Kaiser Franz Josef and Mother’s Cake before the grande dame of Austrian art pop, Ankathie Koi, takes the stage with her crew of intergalactic music makers.

Next to other open air shows at the Red Bull Brandwagon with acts like Lea Santee and Mirac, other events will enliven the art and culture houses in the surrounding area. Since the Brut-Theater is currently closed due to renovations, a new space will be opening up in the historical domed hall of the Technical University with concerts taking place on Friday and Saturday starting at 22.00.

Friday will bring us Die Buben im Pelz, Mile Me Deaf, and Fauna. Saturday Gustav & die Proloband will be performing songs from the Proletenpassion and Mira Lu Kovacs will be getting together with Kompost 3 to present their current project 5K HD.

The TU Prechtsaal will also be opened for five days of concerts including the psychedelic rock legends of Tav Falco‘s Panther Burns and the uncompromising post punk of Bruch on Thursday. On Friday the hall will be flirting with the pop appeal of Wendja, Soia, Onk Lou and Möwe while Saturday will feature female hip hoppers Klitclique and global electronic from Cid Rim.

On the opening day the Wien Museum will bring a capella soul pop from Beat Poetry to the stage followed by fine songwriting from Fräulein Hona & Bernhard Eder and Joe Traxler.

The Popfest finale on Sunday will once again take place the hallowed halls of the Karlskirche. It will be an evening somewhere between chamber music and grunge with the experimental projects of the theremin player Pamelia Stickney, the soundscape creator Dino Spiluttini, and the new album presentation of “Creature Comforts” from Maja Osojnik and Meaghan Burke & the Burkettes.

The Popfest Sessions will once again start in the Wien Museum on Saturday at 11:00 with a well stocked label and vinyl market. The sessions will continue with expert-talks including a discussion of “The Word in Pop” with Teresa Präauer, Markus Binder, Tex Rubinowitz, Christopher Just, Andreas Spechtl, Hubert Weinheimer and Rana Farahani. Another talk will focus on the work of A&Rs in the digital era with Fiete Klatt (Universal Music), Jack Shankly (Domino Records), Christoph Muck (ForTunes) and Elias Oldofredi (Good Life Music).

On Sunday the talks continue with a producers meeting including speakers like Zebo Adam, Paul Gallister and Chrono Popp as well as an emphasis on the upcoming exhibition in the Wien Museum, “Ganz Wien – Eine Pop-Tour”. In between the panels legendary local acts like Al Cook, Rucki Zucki Palmencombo and Graf Hadik und die Flughunde will perform.
Download the full programm (pdf) for the Popfest Sessions here.